The charts below show the main reasons for study among students of different age groups and the amount of support they received from employers.

Reasons for study according to age of students [data in percentage]

Employer support, by age group (Time off and help with fees) [data in percentage] 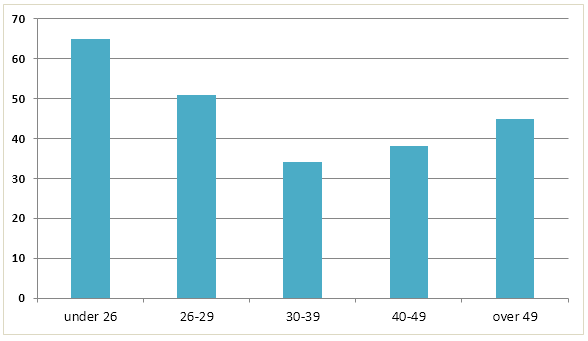 Model Answer 1:
The bar chart delineates the ratio of pupils who continue their education for the benefit of their career and from passion, based on their age groups while the line graph reveals the support those students got from their companies as a form of financial support and time off.

Overall, young students’ main focus for education is their career while it was mostly passion for elder learners. Moreover, young students below 30 years of age received more support from their employers.

To illustrate, eight of ten people under 26 years old continue education for their career. Only 10% of them do it from passion. Interestingly, the higher the age, the more eager they become to study for personal interest, not for professional reasons. Seven out of ten people who are at least 50 years old study for interest. Finally, these two factors equally motivate people from 40-49 years old to further their learning.

The second diagram shows that young employees who were younger than 30 years old, got more backing from their employers while the least support is expected for workers between 30 to 39 years old. However, it is interesting to notice that employers were more sympathetic to workers over 40 years old than they were to employees in their thirties.

Sample Answer 2:
The diagrams outline why students from different age groups study and the support they received from their employers.

Overall, having a good career is the main reason for young to study while it is personal interest for grown-ups. Moreover, young employees got more support from their employers regarding their education.

The second bar graph shows that more than 60% students under 26 years old got support from their employers for their education and this supports included the time off and monetary support. This percentage of support reduced with the increase of age of the learners, and at 30-39 age group, 32% got the support from the employers. After that, the employers’ support for their employees’ education increased and reached to 45% for the over 49 year’s age group.

Sample Answer 3:
The graphs illustrate why people from different age groups continue their studies and the support employers offered to them in terms of financial and time off.

Overall, it is obvious that there is a decreasing trend among students who study for their profession as they become older, whereas the reverse is true for those who study for passion.

It is apparent that the highest percentage of students (80%) study for their career and they are under 26 years old. Turning to the personal interest as a reason for the study, the higher the age, the ratio of pupil learning from passion increases. In addition, an equal percentage of people, aged 40 to 49, study for their career and interest in subjects.

The second bar chart reveals that the employers gave more support to their young employees (those under 26 years old) and elderly workers with the least support provided to those in the age range between 30 and 39 years old.

Model Answer 4:
The charts depict why students at different ages study and also give information about the support (time off or financial aid) they received from their employers.

With regard to motivations, the majority of people under 40 years study in order to promote their career, although this attitude varies depending on the age of polled people. To start with, 80% students under 26 years express that they study because of career preparation while just 10% study for interest in subjects. In older cohorts, 70% of 26-29 years old students and 58% of 30-39 years old students, say that career plays an important role, while in the group of 40-49, career and interest are similarly important. People over 49 mainly study because of interest (70%).

Regarding support they received from offices, approximately 62% of interviewees under 26 years said that they got support from their employers whereas the majority of students being older than 25 did not receive much help from their companies.

RSS
Muneeb Akhtar 9 months 28 days
The first bar chart provides information about the students' main reasons for studying while the second bar graph gives data on the support, in terms of time off and tuition fees, these students receive from their employers.

Overall, young students main reason for studying is to build their career while they study from interests as they get aged.

80% of young students below 26 years old primarily study to build a career. Then between the age of 26 to 29, 70% of them continue their education for a career while 15% do so from interests in studying. As they get older, their reason for study to build a career declines while their interest to study increases. An equal ratio of students (40% each) between the age of 40 and 49 continue education both for interests and career. Finally, when they are over
49, they mainly study from interest.

Tien Nguyen 10 months 12 days
The bar graphs compare the reasons for studying of students from different age groups and the time off and fees they get from their employers.

It is clear that most people spend their time learning new things to prepare for their work when they are young, and start to take interest in studies when they get older. We can also see that employers likely want to support younger people than older ones.

In the first graph, 80% under-26 people answered that they took their courses because of their plan for future jobs, while only 10% of them are studying because of their interests in learning. This reason for studying has a considerable decrease for older people. People at the ages 40 - 49 have a balance of reason in learning, at 40%, and who are over 49 will consider study as their passionate activity, rather than the purpose for career, which are 70% and 20% respectively.

Nguyen Thuong Vu 1 year 7 months
The bar graphs display why students from five different age groups study as well as the percentages of those receiving help from employers, either in terms of time or fees. Generally speaking, students under 26 years old, who mainly learn in order to find jobs, receive the most support.

Eight out of every 10 youngsters want to study for their career while only one does so for interest. As people grow older, their passion for learning increases while the need to have jobs declines steadily. Nearly 60% of those in their 30s want to learn for jobs, while the figure goes below one-fifth for people at least 50 years old. On the other hand, 70% of them study because of their passion. Interestingly, the proportions of students between the ages of 40 and 49 studying for career and passion are similar, both representing slightly over 40%.

As for employer support, 65% of students under 26 years old get employer support, which is almost double when compared with those in their 30s. The proportion of those over 49 years of age receiving help is 45%, while the figure regarding the age group 26-29 is six per cent higher.

Adeliya 3 years 3 months
A glance at the bar graphs provides information regarding major reasons for study by people in different age groups as well as receiving support from employers.

As for employers, they are more likely to provide financial support to students aged under 26 and the rate was estimated at 60 per cent. The graph depicts a downturn trend in employers' support in connection with the increasing age of students. The lowest rate was fixed in the age group from 30 to 39 with 30 per cent.

Hannah 4 years 6 months
I think you have changed the word career and interest!

Birhane 4 years 11 months
But why the graph charts sometimes do not indicate what is mentioned in the graph vertical axis?? Is the official IELTS same as this one??? And big respect and thanks. I am going to take IELTS and I am preparing for each section in this awesome Website. thank you all. Wish to hear your answer to my questions!

Sukma Wati 6 years 5 months
The charts provide information about the primary reasons for study and how educational cost is shared by employers among different age groups of people. The first chart reveals the reason for studying based on age and the second chart shows how much employers help those students in terms of time off and fees.According to the first chart, it is clearly seen that interest is the main reason to study for 3 age groups (under 26, 26-29, 30-39 years). However, students who are 40-49 years old consider interest to be as important as career growth. Career even gets to be more essential for people over 49 where 70% of them take career as a reason to study and 20% for interest.Additionally, the second chart indicates that students under 26 and 26-29 years get more help from the employers compared to other groups, 60% and 50% respectively. Oppositely, students aged 30-39 receive the lowest percentage with only 30% support while student aged 40-49 and over 49 are not far different with 35% and 40% accordingly.Overall, the reason for studying and the support from employers vary differently depending on students’ age.

Rajinder Singh 7 years 5 months
The supplied bar graphs elucidate the information about the main reasons for education according to students of different age groups. It also gives details on the supports they receive from employers for their education. As is presented in the illustration, the key reasons for people to study is either career development or interests. 80% younger students, who are under 26, continue their studies for career and they receive the highest percentage of supports in terms of time off and monetary help from their office authorities. Pupils who are below 39 years old give their career more priority than their interests on subjects while choosing to continue their student life. However, this is not the case for people who are over 49 years old as their focus of education is interests rather than career growth. This comparatively senior age group gets around 45% support from their offices which is higher than the support received by the 30 to 39 years people. however, the highest supports from employers are bestowed to the younger students.