Punctuation Marks
Punctuation marks are signs such as periods, commas and question marks. They are used in sentences to make the meaning clear. 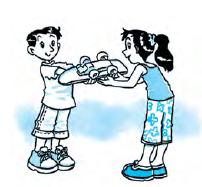 Period ( • )
Put a period at the end of a sentence.
» Tim lent me his skateboard.
» The children are playing in the garden.
» The train arrived late.
» It’s not a very sunny day.

Comma ( ‚ )
Put a comma between items in a list.
You need paper, scissors and glue.
She likes reading, swimming, playing basketball and going to the movies.
Tom, May Ling, Sue and Christopher all went shopping together.

You also put a comma before or after the name of the person you are speaking to.
Hello, Mr. Carter.
Miss Lee, can I borrow a pencil, please?
Goodbye, Andrew.

Commas are used before please and thank you.
Could you pass me that pencil, please?
I’ve had enough to eat, thank you.

A comma is also used between the parts of a place name.
Chicago, Illinois; Tower Bridge, London;  Athens, Georgia.

Question mark ( ? )
Write a question mark at the end of a question, instead of a period.
Can you hear me, children?  Didn’t you read the sign?
Who is that man talking to Dad?  Where is my schoolbag?

Exclamation ( ! )
Use an exclamation point at the end of a sentence that shows a strong feeling such as surprise or fear. An exclamation point is used instead of a period.
What a silly thing to do! Help! A monster!
You’re completely wrong! What a shame!

You can also use exclamation points with strong orders.
Sit down!
Don’t touch that knife!
Do it now!

Exclamation points are usually used after interjections. People often use just one or two words to express a sudden feeling such as fear, happiness, surprise or anger, or in greeting somebody. These short expressions are called interjections. Here are some examples:
Hello! Ouch! Good morning! Hurray! Good night! Help! Well done! Look out! Oh dear! Happy Birthday!

Apostrophe ( ' )
Use an apostrophe with s to show who something belongs to.
This is Michael’s room.
This is my Dad’s desk.
Are you Kathleen’s mum?

Quotation marks  ( “  ” )
Use quotation marks around the exact words that someone says. You put the mark “ at the beginning of the words, and the mark ” at the end.

Use a comma before the last quotation mark, to separate the words from the rest of the sentence.
“This bike is mine,” said Susan.
“I would like some apple juice, please,” said the little boy.

Suppose the exact words that someone says come after the rest of the sentence. In this case put a period before the last quotation mark.
Dad said, “Come inside and have lunch.”
“John,” said Mom, “please turn your music down.”

Put question marks and exclamation points in the same place as periods, before the last quotation mark.
“Is this the way to the station?” the man asked.
Sam said, “Can I borrow your pencil?”
“Don’t do that!” said Mom.
John said, “What a great movie!”

Colon ( : )
When you are reading a play-script, notice the colon between the name of a character and the words that they speak.
Jack: What have you got in the bag?
Maggie: My swimming suit.
Jack: When are you going swimming?
Maggie: This afternoon. Would you like to come?

Capital Letter
Use a capital letter as the first letter of the first word in a sentence. Dogs have wet noses.
Where is my ball?
That isn’t fair!
This is my brother.
You need a racket if you’re going to play tennis.

You also use a capital letter for the first letter of the first word in direct speech.
Sam said, “This is my brother.”
“Where is my ball?” Tom asked.

The word I is always written as a capital letter.
I’m really pleased with your work.
Do you know what I got for my birthday?

Use a capital letter to begin the names of people and places.
John, Australia, the Sphinx, May Ling, Germany,  the Taj Mahal, David Beckham etc.

The days of the week and months of the year begin with a capital letter.
January, March etc.
Sunday, Friday etc.

Capital letters are also used in the titles of books, films and plays.
The Lady and the Tramp
Star Wars
Harry Potter and the Sorcerer’s Stone
The Adventures of Sherlock Holmes

You also use a capital letter for the first letter in words and phrases that you use for saying hello and goodbye.

Md Rasel Khondoker 3 years 5 months
Your webpage is very helpful. I am getting a lot of advantages from it... Thanks a lot.

Pooja 4 years 5 months
Hi, can you help check below speaking topic which I had prepared for practice?Topic: Describe something you did that made you feel proud of yourself.You should say: - what you did - when you did it - why you felt proud of what you had done- and explain how you felt when this happened.Answer: Whenever anyone accomplishes something mentionable, he/ she feels very appeased about it. Sometimes it is a simple attainment, sometimes it may be an achievement for someone else. Today I would like to talk about an accomplishment I feel exultant about. It happened when I was in 12th-grade in school. I was a hardworking student and got high grades consistently. I also participated in different activities organized by the school. 12th grade is the last stage of our school life. After completion of our 12th grades, we take the first stair of our future. After the end of the 12th-grade final exam, our school organized an event in which we attended with our parents. First, we went there and took our seats and enjoyed the performance which was prepared by junior students and teachers. After it, our principal came to the stage and spoke about the students of our school, and he announced two students' names for the award- the first one for the best girl and second one for the best boy of the year. I really had no any idea about that! The first name for the award was my classmate - Abhay and 2nd name which I heard was mine. I could not believe that it was me! I was perplexed and elated at the same time. My parents were also very delighted and proud of me. I was invited to give a speech and despite my initial hesitation, I delivered a speech which was applauded greatly. That achievement inspires me to do even better and I will never forget how proud I was for this achievement.

Dev 4 years 6 months
One of the best website for IELTS preparation. Thanks.

Mue 5 years 3 months
Do you have any suggestion about Advance IELTS Grammar? I couldn't click on that bold words. Can you help me, please?

Moustafa 5 years 6 months
Where can I find advanced grammar?

Sajith 7 years 6 months
Woooow... this is the best grammar lesson.