A New Threat in Yellowstone

It has long been known that Yellowstone National Park lies over an enormous supervolcano. The term ‘supervolcano’ implies a volcanic centre that has had an eruption of magnitude 8 on the Volcano Explosivity Index (VEI), meaning the measured deposits for that eruption are greater than 1,000 cubic kilometres. This sounds worrying and Professor George Peters details the possible results if something were to happen. “A major eruption would obliterate the surroundings within a radius of hundreds of kilometres, and cover the rest of the United States and Canada with multiple inches of ash. This would shut down agriculture and cause global climate cooling for as long as a decade.” To calm everyone down, geologist, Tony Masters, explains there is little to fear today. “All VEI 8 eruptions, including the last at Yellowstone, occurred tens of thousands to millions of years ago. Another eruption could occur, but it is very unlikely to happen in the next million years or so.”

Yellowstone is no stranger to controversy. There was a previous media accusation that US Geological Survey (USGS) geologists had not done their work properly and that the identification of Yellowstone as a supervolcano was not done until scientists looked at photographs of Yellowstone from space. The Yellowstone scientists denied this. Spokesman Alice Wheeler clarifies their position. “The scientist who first identified the three Yellowstone calderas was from the USGS and he told the world about the great eruptions that formed them. He traced out the caldera boundaries through old fashioned field work, walking around with a hammer and hand lens and looking carefully at the rocks and their distributions.” The National Aeronautics and Space Administration (NASA) also agreed. Stan Forsyth, their spokesman, explains. “Several authors have written that these large calderas in Yellowstone were discovered from space, but we suspect that the rumour probably got started because initial field work that identified them was partly funded by NASA.”

A new problem in Yellowstone is that the supervolcano has now been discovered to be larger than originally thought and this has made people feel more nervous. Seismologists at the University of Utah have worked with several other institutions to create an image of the Yellowstone magma reservoir using a technique called seismic tomography. Masters student, Julia Grey, explains the results. “By looking closely at data from thousands of earthquakes, we have discovered that there are two magma reservoirs, one shallow and one deep, and that they are much larger than originally believed. The shallow one was previously known about to us, but the deeper one is a new finding.”

To create an image of this second magma reservoir beneath Yellowstone, the research teams reviewed data from thousands of earthquakes. Seismic waves travel slower through hot, partially molten rock and faster in cold, solid rock. The researchers made a map of the locations where seismic waves travel more slowly, which provided a sub-surface image of the hot or partially molten bodies in the crust beneath Yellowstone. The deeper magma storage region extends from 20 to 50 kilometres depth, contains about 2 per cent melt, and is about 4.5 times larger than the shallow magma body. The shallower magma storage region is about 90 kilometres long, extends from 5 to 17 kilometres depth, and is 2.5 times larger than a prior, less accurate, study indicated. This magma reservoir contains between about 5 to 15 percent molten rock. Although this is the crustal magma storage region that has fuelled Yellowstone’s past volcanic activity, magma typically does not erupt unless it has greater than 50 percent melt.

The US and world media were quick to dramatise the finding and exaggerate the threat that these findings represent. Yellowstone park scientist, Amy Brent, has calming words. “These findings do not increase the assessment of volcanic hazard for Yellowstone. The inferred magma storage region is no larger than we already knew. The research simply makes a better image of the magmatic system. Simply, we have more key information about how the Yellowstone volcano works.”

Many independent reports back up Brent’s comments and have shown that the Yellowstone area has been on a long cycle of periodic eruptions. Eruptions are extremely infrequent in supervolcanos, and eventually, the cycle ends in their deaths. US government geologist, Andrea Haller, explains the state of the Yellowstone supervolcano. “By investigating the patterns of behaviour in two previously completed caldera cycles, we can suggest that the current activity of Yellowstone is on the dying cycle.” This is based on comparisons with other supervolcanos. Scientists know the behaviour of the past and they know at what comparative stage Yellowstone is right now. It is believed that Yellowstone is currently on a third and dying cycle. This can be concluded by the fact that dying volcanos produce less fresh molten material from the Earth’s crust. Haller continues. “We’ve observed a lot of material in the magma chambers that represent recycled volcanic rocks, which were once buried inside of calderas and are now getting reused. Yellowstone has erupted enough of this material already to suggest that the future melting potential of the crust is getting exhausted.”

Whatever the truth about Yellowstone, it seems that during the lives of most people, the geological status of Yellowstone can still prove hazardous. The park has often been closed due to volcanic activity in the past and this is likely to happen again before the volcano becomes harmless.

Look at the following statements (questions 14-20) and the list of people below.

Match each statement with the correct person’s initials.

Write the correct initials in boxes 14-20 on your answer sheet.

Write NO MORE THAN THREE WORDS AND/OR A NUMBER from the text for each answer. 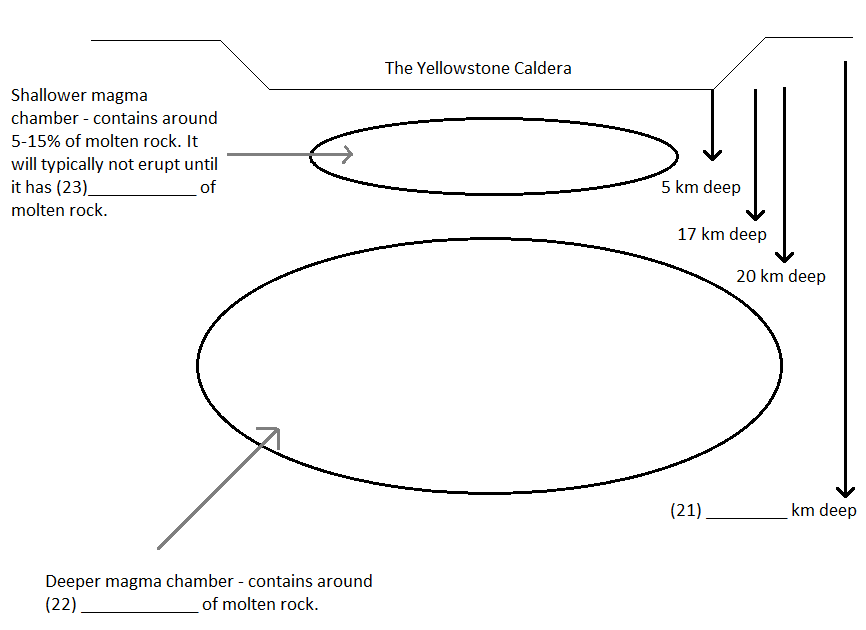 Choose the correct letter A, B, C or D.

Write the correct letter in boxes 24-26 on your answer sheet.

24.   Images of the magma chambers can be made, because


25.  The death of the Yellowstone supervolcano

A    will occur in the next few years.
B    cannot ever be predicted.
C    can be probably predicted due to the lack of fresh molten rock.
D    will follow the next major eruption.

RSS
Khalifah Omar 2 years 2 months
I like to study English.