You should spend about 20 minutes on Questions 14-26 which are based on Reading Passage 141 below.

The first students to study alternative medicine at university level in Australia began their four-year, full-time course at the University of Technology, Sydney, in early 1994. Their course covered, among other therapies, acupuncture. The theory they learnt is based on the traditional Chinese explanation of this ancient healing art: that it can regulate the flow of ‘Qi’ or energy through pathways in the body. This course reflects how far some alternative therapies have come in their struggle for acceptance by the medical establishment.

Australia has been unusual in the Western world in having a very conservative attitude to natural or alternative therapies, according to Dr Paul Laver, a lecturer in Public Health at the University of Sydney. ‘We’ve had a tradition of doctors being fairly powerful and I guess they are pretty loath to allow any pretenders to their position to come into it.’ In many other industrialized countries, orthodox and alternative medicines have worked ‘hand in glove’ for years. In Europe, only orthodox doctors can prescribe herbal medicine. In Germany, plant remedies account for 10% of the national turnover of pharmaceutical. Americans made more visits to alternative therapist than to orthodox doctors in 1990, and each year they spend about $US 12 billion on the therapies that have not been scientifically tested.

Disenchantment with orthodox medicine has seen the popularity of alternative therapies in Australia climb steadily during the past 20 years. In a 1983 national health survey, 1.9% of people said they had contacted a chiropractor, naturopath, osteopath, acupuncturist or herbalist in the two weeks prior to the survey. By 1990, this figure had risen to 2.6% of the population. The 550,000 consultations with alternative therapists reported in the 1990 survey represented about an eighth of the total number of consultations with medically qualified personnel covered by the survey, according to Dr Laver and colleagues writing in the Australian Journal of Public Health in 1993. ‘A better educated and less accepting public has become disillusion with the experts in general and increasingly skeptical about science and empirically based knowledge,’ they said. ‘The high standing of professionals, including doctors, has been eroded as a consequence.’

Rather than resisting or criticizing this trend, increasing numbers of Australian doctors, particularly younger ones, are forming group practices with alternative therapists or taking courses themselves, particularly in acupuncture and herbalism. Part of the incentive was financial, Dr Laver said. ‘The bottom line is that most general practitioners are business people. If they see potential clientele going elsewhere, they might want to be able to offer a similar service.’

According to the Australian Journal of Public Health, 18% of patients visiting alternative therapists do so because they suffer from musculo-skeletal complaints; 12% suffer from digestive problems, which is only 1% more than those suffering from emotional problems. Those suffering from respiratory complaints represent 7% of their patients, and candida sufferers represent an equal percentage. Headache sufferers and those complaining of general ill health represent 6% and 5% of patients respectively, and a further 4% see therapists for general health maintenance.

The survey suggested that complementary medicine is probably a better term than alternative medicine. Alternative medicine appears to be an adjunct, sought in times of disenchantment when conventional medicine seems not to offer the answer.

Questions 16-23
Do the following statements agree with the views of the writer in Reading Passage 141?

Questions 24 -26
Complete the vertical axis on the table below.
Choose NO MORE THAN THREE WORDS from the Reading Passage 141 for each answer.
Write your answer in boxes 24-26 on your answer sheet. 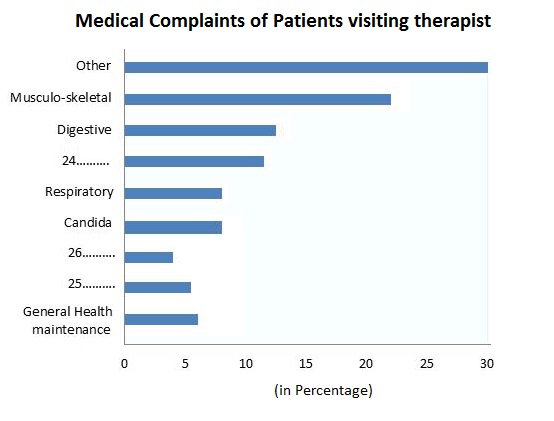 RSS
Judit 5 years 7 months
Hello, I would like to have an answer for the questions 25-26. Does not need to take into consideration the length of the line graphs?? In the text, it was 6% headache and 5%general illnesses.

Alfas Rahman 5 years 10 months
I am Alfas. This website is a great help for my IELTS preparation.

Amir 7 years 3 months
The graph is misleading as the %-age shown is not accurate. My approach is that because the question has the same number of sickness as in the statement, I simply picked up what remained.

Amir 7 years 3 months
I am afraid that 'over' in this statement does not mean 'more than'. Thus the answer is 'Yes'.

Rene 7 years 5 months
The answers for question numbers 25 and 26 are General ill health and General health maintenance as these are labelled accordingly in the passage as well as in the diagram. I need a reply to clarify my point - whether I am right or wrong. Thank you.

Kellen 7 years 6 months
Question 16: in the reading passage they mentioned 'disenchantment with orthodox medicine has seen the popularity of alternative therapies in Australia climb steadily during the past 20 years.'And I chose to answer 'No', because of the usage of the word - between 'over' and 'and during' is different. What do you think? Please, anyone who can answer, give me a comment for that.

Esmeralda 7 years 11 months
My name is Esmeralda. I live in Dronten, Netherlands. I randomly stumbled on ielts-mentor.com. I just want to say that I liked your website a lot.

Rayford 7 years 11 months
My name is Rayford. I live in Augusta, United States. I randomly stumbled on www.ielts-mentor.com. I just want to say that I like your IELTS website.

Winifred 8 years
My name is Wini. I live in Italy. I randomly stumbled on ielts-mentor.com. I just want to say that I like your website.

Evan 8 years 7 months
The neat post, the reading passages and the answers are great help for IELTS Exam.