You should spend about 20 minutes on Questions 14-26, which are base on the Reading Passage below:

The True Cost of Food

A  For more than forty years the cost of food has been rising. It has now reached a point where a growing number of people believe that it is far too high and that bringing it down will be one of the great challenges of the twenty-first century. That cost, however, is not in immediate cash. In the West at least, most food is now far cheaper to buy in relative terms than it was in 1960. The cost is in the collateral damage of the very methods of food production that have made the food cheaper: in the pollution of water, the enervation of soil, the destruction of wildlife, the harm to animal welfare and the threat to human health caused by modern industrial agriculture. 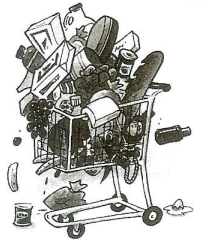 B  First mechanisation, then mass use of chemical fertilisers and pesticides, then monocultures, then battery rearing of livestock, and now genetic engineering– the onward march of intensive farming has seemed unstoppable in the last half-century, as the yields of produce have soared. But the damage it has caused has been colossal. In Britain, for example, many of our best-loved farmland birds, such as the skylark, the grey partridge, the lapwing and the corn bunting, have vanished from huge stretches of countryside, as have even more wild-flowers and insects. This is a direct result of the way we have produced our food in the last four decades. Thousands of miles of hedgerows, thousands of ponds have disappeared from the landscape. The faecal filth of salmon farming has driven wild salmon from many of the sea lochs and rivers of Scotland. Natural soil fertility is dropping in many areas because of continuous industrial fertiliser and pesticide use, while the growth of algae is increasing in lakes because of the fertiliser run-off.

C  Put it all together and it looks like a battlefield, but consumers rarely make the connection at the dinner table. That is mainly because the costs of all this damage are what economists refer to as externalities: they are outside the main transaction, which is for example producing and selling a field of wheat, and are borne directly by neither producers nor consumers. To many, the costs may not even appear to be financial at all, but merely aesthetic - a terrible shame, but nothing to do with money. And anyway they, as consumers of food, certainly aren't paying for it, are they?

D  But the costs to society can actually be quantified and, when added up, can amount to staggering sums. A remarkable exercise in doing this has been carried out by one of the world's leading thinkers on the future of agriculture, Professor Jules Pretty, Director of the Centre for Environment and Society at the University of Essex. Professor Pretty and his colleagues calculated the externalities of British agriculture for one particular year. They added up the costs of repairing the damage it caused and came up with a total figure of £2,343m. This is equivalent to £208 for every hectare of arable land and permanent pasture, almost as much again as the total government and EU spends on British farming in that year. And according to Professor Pretty, it was a conservative estimate.

E  The costs included: £120m for removal of pesticides; £16m for removal of nitrates; £55m for removal of phosphates and soil; £23m for the removal of the bug cryptosporidium from drinking water by water companies; £125m for damage to wildlife habitats, hedgerows and dry stone walls; £1,113m from emissions of gases likely to contribute to climate change; £106m from soil erosion and organic carbon losses; £169m from food poisoning; and £607m from cattle disease. Professor Pretty draws a simple but memorable conclusion from all this: our food bills are actually threefold. We are paying for our supposedly cheaper food in three separate ways: once over the counter, secondly through our taxes, which provide the enormous subsidies propping up modern intensive farming, and thirdly to clean up the mess that modern farming leaves behind.

F  So can the true cost of food be brought down? Breaking away from industrial agriculture as the solution to hunger may be very hard for some countries, but in Britain, where the immediate need to supply food is less urgent, and the costs and the damage of intensive farming have been clearly seen, it may be more feasible. The government needs to create sustainable, competitive and diverse farming and food sectors, which will contribute to a thriving and sustainable rural economy, and advance environmental, economic, health, and animal welfare goals.

G  But if industrial agriculture is to be replaced, what is a viable alternative? Professor Pretty feels that organic farming would be too big a jump in thinking and in practices for many farmers. Furthermore, the price premium would put the product out of reach of many poorer consumers. He is recommending the immediate introduction of a 'Greener Food Standard', which would push the market towards more sustainable environmental practices than the current norm, while not requiring the full commitment to organic production. Such a standard would comprise agreed practices for different kinds of farming, covering agrochemical use, soil health, land management, water and energy use, food safety and animal health. It could go a long way, he says, to shifting consumers as well as farmers towards a more sustainable system of agriculture.

Write the correct letter, A-G, in boxes 14-17 on your answer sheet.

NB  You may use any letter more than once.

14. a cost involved in purifying domestic water
15. the stages in the development of the farming industry
16. the term used to describe hidden costs
17. one effect of chemicals on water sources

Questions 18-21
Do the following statements agree with the claims of the writer in the Reading Passage?

18. Several species of wildlife in the British countryside are declining.
19. The taste of food has deteriorated in recent years.
20. The financial costs of environmental damage are widely recognised.
21. One of the costs calculated by Professor Pretty was illness caused by food.

Questions 22- 26
Complete the summary below.
Choose NO MORE THAN THREE WORDS from the passage for each answer.
Write your answer in boxes 22-26 on your answer sheet.

I need to learn how to read it very well.

Goutam Chandra Das 4 years 3 months
I need to learn how to read it very well.

Judit 5 years 6 months
From where could we know about question 21? I can not find anything about mentioning the professor illness caused by food.

Joyce 6 years 9 months
Please write a summary of the passage.

Charles Arthur 6 years 9 months
Can you please send me the solutions to the reading passage? Thus, the summary.

Shah 8 years 2 months
Dear Sir,Can you please help me to find all the answers of this reading passage? I'm stuck from the beginning. Please help me out.Thank You.