You should spend about 20 minutes on Questions 14-26. which are based on Reading Passage 156 on the following pages.

Questions 14-19
Reading Passage 156 has seven sections, A-G.
Choose the correct headings for sections A-F from the list of headings below.
Write the correct number, i-x, in boxes 14-19 on your answer sheet.

i  The results of the research into blood-variants
ii  Dental evidence
iii  Greenberg's analysis of the dental and linguistic evidence
iv  Developments in the methods used to study early population movements
v  Indian migration from Canada to the U.S.A.
vi  Further genetic evidence relating to the three-wave theory
vii  Long-standing questions about prehistoric migration to America
viii  Conflicting views of the three-wave theory, based on non-genetic Evidence
ix  Questions about the causes of prehistoric migration to America
x  How analysis of blood-variants measures the closeness of the relationship between different populations

A Study of the origins and distribution of hum on populations used to be based on archaeological and fossil evidence. A number of techniques developed since the 1950s however have placed the study of these subjects on a sounder and more objective footing. The best information on early population movements is now being obtained from the archaeology of the living body the clues to be found in genetic material.

B Recent work on the problem of when people first entered the Americas is an example of the value of these new techniques. North-east Asia and Siberia have long been accepted as the launching ground for the first human colonisers of the New World1. But was there one major wave of migration across the Bering Strait into the Americas, or several? And when did this event, or events, take place? In recent years, new clues have come from research into genetics, including the distribution of genetic markers in modern Native Americans2.

C An important project, led by the biological anthropologist Robert Williams, focused on the variants (called Gm all types) of one particular protein - immunologic G - found in the fluid portion of human blood. All proteins 'drift', or produce variants, over the generations, and members of an interbreeding human population will share a set of such variants. Thus, by comparing the Gm allotypes of two different populations (e.g. two Indian tribes), one can establish their genetic distance, which itself can be calibrated to give an indication of the length of time since these populations last interbred.

D Williams and his colleagues sampled the blood of over 5,000 American Indians in western North America during a twenty- year period. They found that their Gm allotypes could be divided into two groups, one of which also corresponded to the genetic typing of Central and South American Indians. Other tests showed that the Inuit (or Eskimo) and Aleut3 formed a third group. From this evidence, it was deduced that there had been three major waves of migration across the Bering Strait. The first, Paleo - Indian wave more than 15,000 years ago was ancestral to all Central and South American Indians. The second wave, about 14,000-12,000 years ago, brought No-Dene hunters ancestors of the Navajo and Apache (who only migrated south from Canada about 600 or 700 years ago). The third wave perhaps 10,000 or 9,000 years ago saw the migration from Northeast Asia of groups ancestral to the modem Eskimo and Aleut.

E How far does other research support these conclusions? Geneticist Douglas Wallace has studied mitochondrial DNA4 in blood samples from three widely separated Native American groups: Pima- Papa go Indians in Arizona, Maya Indians on the Yucatan peninsula, Mexico, and  Ticuna Indians in the Upper Amazon region of Brazil. As would have been predicted by Robert Williams's work, all three groups appear to be descended from the same ancestral (Paleo-Indian) population.

F There are two other kinds of research that have thrown some light on the origins of the Native American population; they involve the study of teeth and of languages. The biological anthropologist Christy Turner is on expert in the analysis of changing physical characteristics in human teeth. He argues that tooth crowns and roots5 have a high genetic component, minimally affected by environmental and other factors. Studies carried out by Turner of many thousands of New and Old World specimens, both ancient and modern, suggest 'hot the majority of prehistoric Americans are linked to Northern Asian populations by crown and root traits such as incisor6 shoveling (a scooping out on one or both surfaces of the tooth), single-rooted upper first premolars6 and triple-rooted lower first molars6.

According to Turner, this ties in with the idea of a single Paleo-Indian migration out of North Asia, which he sets at before 14,000 years ago by calibrating rates of dental micro-evolution. Tooth analyses also suggest that there were two later migrations of Na-Denes and Eskimo- Aleut.

G The linguist Joseph Greenberg has, since the 1950s, argued that all Native American languages belong to a single Amerind family, except for No-Dene and Eskimo-Aleut - a view that gives credence to the idea of three main migrations. Greenberg is in a minority among fellow linguists, most of whom favor the no I on of a great money waves of migration to account for the more than 1,000 - languages spoken at one time by American Indians. But there is no doubt that the new genetic and dental evidence provides strong backing for Greenberg's view. Dates given for the migrations should nevertheless be treated with caution, except where supported by hard archaeological evidence.

1. New World: the American continent, as opposed to the so-called Old World of Europe, Asia and Africa
2. Modern Native America: an American descended from the groups that were native to America
3. Inuit and Aleut: two of the ethnic groups native to the northern region of North America (i.e. northern Canada and Greenland)
4. DNA: the substance in which genetic information is stored
5. Crown/ Root:  Parts of the tooth
6. incisor/premolar/molar:  kinds of teeth

Questions 20 and 21
The discussion of Williams's research indicates the periods at which early people are thought to have migrated along certain routes.
There are six routes, A-F, marked on the map below.


Early Population Movement to the Americas 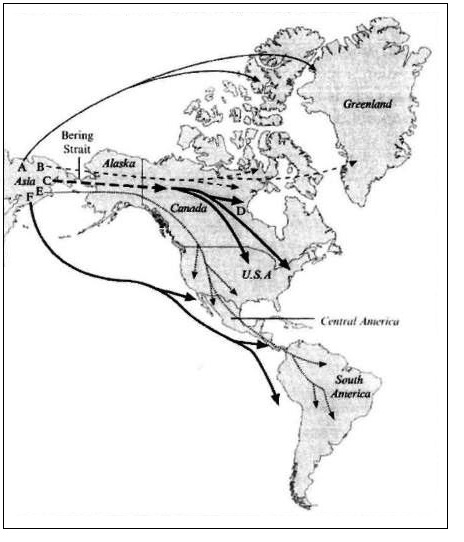 Questions 22-25
Reading Passage 156 refers to the three-wave theory of early migration to the Americas. It also suggests in which of these three waves the ancestors of various groups of modern native Americans first reached the continent.

Classify the groups named in the table below as originating from

Christy Turner's research involved the examination of ....
A teeth from both prehistoric and modern Americans and Asians
B thousands of people who live in either the New or the Old World
C dental specimens from the majority of prehistoric Americans
D the eating habits of American and Asian populations

RSS
Binod Kumar B C 4 years 11 months
See the word written with the box you will get it.No-Dene hunters ancestors of the Navajo and Apache (who only migrated south from Canada about 600 or 700 years ago). The answer is 'D'.

Rosano 5 years 6 months
I would like to try. (Section D): migration was performed across the Bering Strait. So only "B, C and E" are suitable.15,000 years ago Paleo-Indian reached Central and South American, so it's "C" only.600-700 years ago Navajo and Apache migrated only from Canada to the south, so it's "D".

Rosano 5 years 6 months
Yeah, that is a tricky one )). Pima-Papago belongs to Paleo-Indian (see section E) and Paleo-Indian is the first wave (see section D). Perhaps you miss it because of spell mistake in the text: Pima-Papa_go.

Rosano 5 years 6 months
20 and 21 were interesting. Unusual and it was difficult to figure out without legend on the side of the picture.

Adil 5 years 9 months
Where is the answer of Q 24 in the reading passage?

Moin 6 years 4 months
Sir, can you explain Question 20 and 21 and their answers? Thanks in advance.

Jeffrey 8 years
Wow! that was unusual. I just wrote an incredibly long comment but after I clicked submit my comment didn't appear. Grrrr... well I'm not writing all that over again. Anyhow, just wanted to say a great website for IELTS candidates and test takers. Keep up the good work IELTS Mentor team.

Peter 8 years 5 months
Great. Thanks for the reading passage and answers. :Roll: