The graphs below show the numbers of male and female workers in 1975 and 1995 in several employment sectors of the republic of Freedonia.

Write a report for a university teacher describing the information shown.

First Step- Analyse:
Two line graphs given in the question. These graphs should be described by comparing/ contrasting main features and should be presented as a report to a University Lecturer.

Second Step- Collecting data/information:
a) Time: First graph is for 1975 and the second one is for the year 1995.
b) Theme: Comparison of men and women workers in 6 Employment sectors.
c) Place and Position: Freedonia.
d) Main Point: Comparison of men and women employees in respect to the job sectors.
e) General Trend: Initially in 1975, Men employees occupied most of the jobs in all sectors.
f) Effects & Result: The number of women employees increased significantly, especially in communication sectors over the 20 years period.
g) Conclusion/ Summary: Conclusion should be a summary of theme, general trend, and result. Sometimes you do not need to write the conclusion part. Keep in mind that graph writing conclusion is not same as writing the conclusion for an essay.

A) Writing Introduction:
The provided graphs represent information about the male and female workers of Freedonia in six different sectors in 1975 and 1995.

B) Writing  General Trend:
As is observed from the two given graphs, the number of male employees was larger in all sectors of employment than that of women but after 20 years this discrimination had plummeted, in particular, in banking & finance sector and surprisingly more women were employed in communication sector in 1995 than their counterpart -men.

C) Writing Detailed Description:
According to the illustration, almost 600 men out of the thousand workers were employed in manufacturing jobs in 1975 and that was almost twice than the number of women employed in the same sector. After 20 years in 1995, the number of male workers in this sector increased to around 700/thousand but the number of women workers remained almost the same as it was in 1975. Again, male workers in banking, wholesale & retail trade, defense, public sectors were significantly larger in number than female workers in 1975. The highest number of workers, both the men and women, worked in public sectors in 1975. In this year in public sectors, almost 80 per thousand were men and 650 per thousand were female, which was larger in number than any other sectors. Job sectors like defense were mostly occupied by men whereas women were very small in number in this sector. In the year 1975, the smallest gap between the number of male and female workers could be observed in the communication sector. After 20 years, in 1995 the scenario changed remarkably. In this year female went ahead of men in communication and trade (wholesale & trade) sectors. Also the different of male and female employees in banking and finance became ignorable. On the other hand, the number of male employees had declined in defense and the opposite is true for women. The job condition in manufacturing sectors remained almost the same as it was 20 years earlier.

D) Describing the results:
Not necessary as it has already been described in detail description.

E) Writing the summary/ conclusion:
In summary, it can be clearly observed from the given graphs that, female participation in different job sectors had significantly improved and in some sectors, they went ahead of men.

Tips 1: Many teachers will tell you not to write any conclusion or summary in your graph answer. Here is what we think-

» Do not write a separate conclusion or summary if you have already described the general trends clearly in the introduction part and have already written more than 150 words.

» In case you find that you are yet to write 150 words and have something to say about the overall graph, go for the conclusion/ summary part.

Tips 2: You should use as many transitional words as appropriate to make the writing coherent. Do not copy the sentences from the given question. You are expected to write a summary, so you should never write down all the facts and figures presented in the graph. Never write less than 150 words.

The graph below shows the area of land from which grain was harvested.

Write a report for a university lecturer describing the information in the graph. 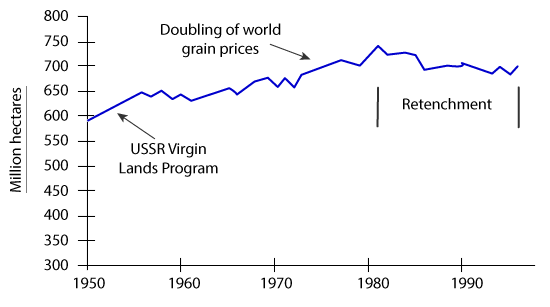 First Step- Analyse :
The given presentation is a line graph. Here 'X' axis represents the time and 'Y' axis represents the area in million hectares where grain was harvested. The question is asking to summarise the main features and to make comparisons where relevant.

a) Time: Past (1950 to 1996).
b) Theme: Total land in million of hectares where grains were harvested.
c) Place and Position: All around the world.
d) Main Point: World grain harvested area.
e) General Trend: Amount of land increased from1950 to 1980 and then this amount decreased.
f) Effects & Result: Virgin land program, Doubling the price of grain, Retrenchment.
g) Conclusion: Not necessary.

B) Writing General Trend:
As is observed from the graphs, total grain harvested area increased until 1980, at which point there was a reduction due to retrenchment.

C) Writing Detailed Description:
According to the given illustration,

D) Describing the results
Not necessary as it has already been described in detail description.

E) Writing the conclusion
Not necessary.

Tips: You should use transitional words to make the writing coherent. Do not copy the sentences from the given question. You are expected to write a summary, so you should never write down all the facts and figures presented in the graph. Never write less than 150 words and any report writing in Academic IELTS task 1 which is less than 150 words, would lose points.

Familiarity with these words would be useful in all IELTS Writing test modules. Common connective words are:

Addition: in addition, and, similarly, likewise, as well as, besides, furthermore, also, moreover, and, then, too, not only ... but, even besides, this, that  etc.

Sequence: first(ly), initially, second(ly), to begin with, then, next, earlier/later, after this/that, following this/that, after wards etc.

Consequence: as a result, thus, so, therefore, consequently, it follows that, thereby, eventually, then, in that case, admittedly etc.

Condition: if, unless, whether, provided that, for, so that, depending on, only if, providing that etc.

Definition: is refers to, means, that is, consists of etc.

Summary: in conclusion, in summary, lastly, finally, to sum up, to conclude, to recapitulate, in short etc.

Example: for instance, one example, for example, just as, in particular, such as, namely, to illustrate etc.

Reason: since, as, so, because (of), due to, owing to, the reason, why, in other words, leads to cause etc.

Time: before, since, as, until, meanwhile, at the moment, when, whenever, as soon as, just as etc.

Now You should be able to write a better IELTS Writing task 1. Follow the Sample Questions or take the model test provided on this website.

RSS
Faysal 4 years 4 months
The graph illustrates the global crop harvesting areas from 1950 to 1996. The unit is measured in Million hectares. Overall, the area of land from which grain was collected risen from 1950 to 1980, but decreased from 1980 to 1996. The worldwide crop growing fields were around 600 million hectares at the beginning of the period. Then the USSR initiated virgin lands program which dramatically extended the dimension of this area to 650 million hectors in 1960. From 1960 to 1970, fluctuations of the total harvested area could be observed. But the area expanded slightly over the period afterwards. The dimension of the area reached around 700 million hectares in 1775. world grain prices doubled in 1977 and it fueled the increase of this area to approximately 750 million hectares in 1980. Then Retrenchment started in 1980 and it reduced the crop growing area dramatically, although there were some fluctuations of the value over the period, and the world gain harvested area after that decreased slightly until 1996.

Taye 5 years
From the first sample passage: "As is observed from the two given graphs, the number of male employees was larger in all sectors of employment than that of women but after 20 years this discrimination had plummeted". Past tense is used for 1975 (i.e. "was"), past perfect is used for 1995 (i.e. had plummeted). Is that correct? 1997 is before 1995. Shouldn't it be the opposite? Thanks.

Marimari 5 years 2 months
The provided graph illustrates the global grain harvesting areas from the years 1950 to 1996 in millions of hectares and the reasons behind some apparent changes of this production. As it is observed from the graphs, the harvested area increased until 1980, when it started to decline during the retrenchment. Initially, 600 million hectares of land was harvested worldwide for the production of grains in 1950. Then the area of land rapidly increased due to the USSR Virgin Lands program, which positively affected the trend. Between the years of 1955 and 1970, there had been minor rises and falls in the amount of area harvested between the margins of 600-700 millions of hectares. A little past 1970, the worldwide doubling of grain prices marked another sharp expansion of the harvested area, dramatically growing the total land by almost 50 million hectares in the span of less than a decade. The numbers appear to be fluctuating up until a little past 1980 where the retrenchment caused the reduction of the harvested land areas.

Harshil 5 years 10 months
Hello, I have a question. In this practice task, I am unable to see the graph and question. Here it's only answered! From where I can get the questions???

Zaid Al-Majali 6 years
May God bless you for these helpful tips :)

Sandeep 6 years 5 months
But I think a conclusion is not required. An overview is a must.

Johny John 6 years 6 months
Oh, it is a wonderful website that I found necessary items which help me to get a good band score in IELTS Thank you, IELTS Mentor, and I wish that lessons on writing task 2 would help all the students to score 7+.

Sakil 6 years 10 months
Vasu, you can find associated graphs in IELTS sample which is right next to download. Hope, you will be to find it.

Vasu Gambhir 6 years 10 months
I am not able to see any of the line graphs or bar graphs associated with the tasks. Could anyone please help me for the same?

Very Good 6 years 11 months
Good one, but it depends on the individual and what question will come in the test. How we attempt that is up to us.

Koem Oun 6 years 11 months
It is a great website.

Tara 7 years 6 months
Almost 600 thousand male were employed in manufacturing jobs in 1975 and that was almost twice than the number of women employed in the same sector. Is the above sentence is correct?