The bar graph below shows the numbers of male and female research students studying six subjects at a US university in 2011. 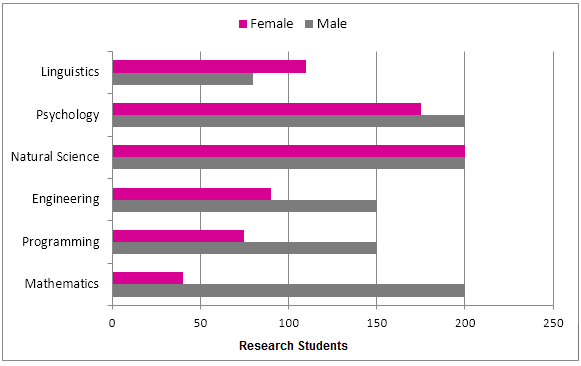 Sample Answer 1:
The given bar graph shows data on the number of male and female research students who were studying in six different subjects at a US university in 2011. As is observed from the given data, more male students were doing research in mathematics, programming and engineering subjects while in linguistic subjects, more females were in research related study than their male counterpart.

According to the graph, 200 males were doing their research in Mathematics in 2011 whereas only about 40 female students were in the same faculty. The only subject in which the number of female researchers was higher than the male was Linguistics amounting more than 100 females compared to the around 80 males. More students were doing their research in Phycology and Natural Science than Engineering and Programming. Interestingly the number of students in Natural Science was same for male and female and that was 200. Again, both in Engineering and Programming there were 150 male students compared to the less than 100 female students.

In conclusion, more males were in research studies in Mathematics, Programming, Engineering and Psychology than women in the given US University in 2011 than females. Female research students only superseded males in linguistic research.


Sample Answer 2:
The provided chart compares the numbers of male and female enrollees in the research study in six subjects (linguistic, psychology, natural science, engineering programming and mathematics) at a US University. Overall, there were more male students enrolled in the field of research than female students.

RSS
Giang 3 years 4 months
The chart compares the number of male and female enrollees in the research study in six different subjects at a US university in 2011.

As is observed, in linguistic subjects, more females were in research related studies than their male counterpart while the reserve is the case for the rest of the research subjects.

As the illustration suggests, both male and female students had an equal number of enrollees (200 each) in "Natural Science" major, the only subject that even out gender imbalance. It is obvious that women were underrepresente d in engineering, programming and mathematics majors in this university this year. Around 90, 70 and 40 female research students enrolled in engineering, programming and mathematics consequentially against 150, 150 and 200 respective male research students. More males than females chose to study Psychology but the gap narrowed by only 50 participations.

On the contrary, the collaborators' rate in linguistics was slightly higher for women, mounting more than 100 females compared to around 80 male students. It is evident that Natural Science, Psychology and Linguistics were preferred by female students while Mathematics was their least prefered major.