The graph below gives information about the preferred leisure activities of Australian children. 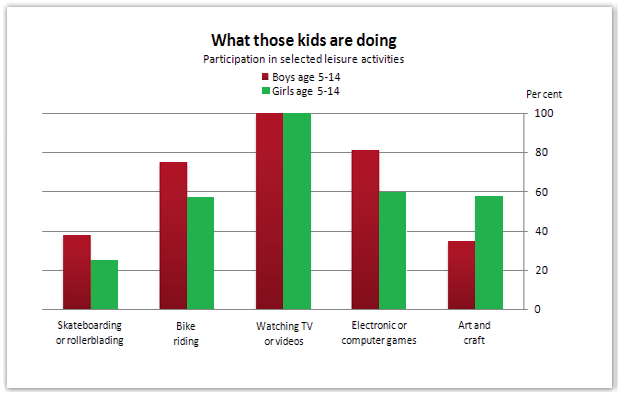 Sample Answer 1:
The bar chart illustrates how Australian children, between 5 and 14, spend their free time. Their leisure activities are categorised into five different pursuits (Skateboarding, Bike riding, Watching TV, Computer games, and Art), and compared by the participation of boys and girls. Overall, it is noticeable that watching TV or videos is by far the most popular activity among Australian adolescents and rollerblading is the least common venture among them.

According to the diagram, all Australian boys and girls are fascinated to watch videos or TV programmes and this is the most typical leisure activity among them. The second most favoured activity among these youths is playing computer games and 80% boys are engaged in this pastime compared to 20% fewer girls. In terms of riding a bike, more than 75% of boys do it in their free time while this ratio among girls is less than 60%. 'Art & craft' as an activity is more favourite among Australian girls than boys. The participation of girls in arts and crafts is somewhat double than that of boy's participation. Finally, skateboarding is the least traditional recreation activity among Australian children. Just over 20% of girls and less than 40% of boys take part in it.

Model Answer 2:
The bar graph gives information about the leisure activities of Australian children between the age of 5 - 14 years. At a first glance it is noticeable that irrespective of sex, Australian kids like to watch TV or videos.

In short, boys spend more time for leisure activities than girls except in art and craft while TV watching is their favourite pastime activity.

Sample Answer 3:
The given bar graph represents data on the children’s leisure activities in Australia. As is presented in the graph, both boys and girls from five to fourteen years old prefer to watch video or TV, ride a bike and play computer games in their leisure time.

According to the graph, all the boys and girls of the 5 to 14 year age group prefer to watch TV and video. This is the most common leisure activity among the Australian children. The second most popular activity among boys and girls is playing computer games and more boys prefer to play games than girls. Bike riding is another popular leisure activity and boys prefer it than the girls as more than 75% of boys do it while less than 60% of girls prefer it. Interestingly girls have more involvement in art and craft than boys and almost 60% girls are involved in these two activities compared to the less than 40% boys. The least popular activity is skating and rollerblading which is preferred by boys than girls.

RSS
Arjeicee 3 years 10 months
The bar graph illustrates data on preferred recreational activities of children aged from 5 to 14 in Australia. Overall, watching TV or videos is the most popular pursuit for both boys and girls. 'Art and craft' is least preferred by Australian boys while skateboarding has the least number of girl participants.

In details, Watching TV is the favourite activity of Australian boys as all of them are engaged in this leisure activity. It is followed by electronic or computer games that comprise 80% boy participants. Skateboarding or rollerblading attracts nearly 4 out of 10 of them which is almost half of the percentage of boys do biking. They favour art and craft the least as only about 37% of them do this activity.

It can be seen that girls also prefer watching TV and playing video games as boys do but a fewer percentage of them (60%) play video games than boys. Girls prefer arts and craft more than boys do and a similar percentage of girls (nearly 58%) do biking. Finally, skateboarding is the least prefered activity by girls and only 2 out of 10 girls do it.

Bibek 5 years 7 months
Can I also give my own answer and will you grade it? it will be very helpful if you grade my answers. Thank you.

Ali 7 years
The given bar chart compares five common free-time activities that Australian children like to do based on their genders. The activities are shown in the x-axis and the y-axis depicts the percentage of boys and girls from 5 to 14 years old who take part in these activities.

Overall, watching TV is popular among both boys and girls. Computer games and bike riding are particularly popular among boys while girls like to do arts and crafts more than boys do.

As is presented as a census of a perusal, all girls and boys in Australia watch TV programmes in their free times. Thus watching TV is the most preferred leisure activity among these children. Moreover, 22% and 38% of girls and boys, who are between 5-14 age, do skateboarding or rollerblading which makes it the least popular free-time activities there. Boys in Australia prefer bike riding (almost 78% of them) and video games (81%) than girls of their age.

Art and craft related leisure activities were more popular among girls than that of boys. More than 57% of girls take this pursuit while boys’ percentage was only about 37%.