The charts below give information about travel to and from the UK, and about the most popular countries for UK residents to visit.

Visits to and from the UK 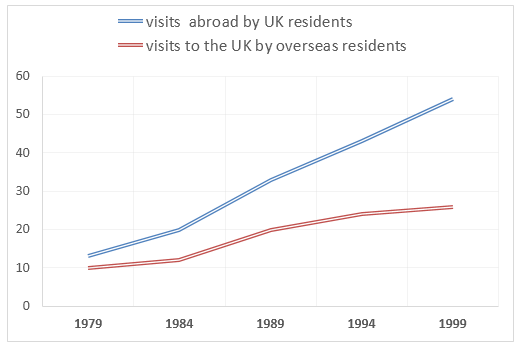 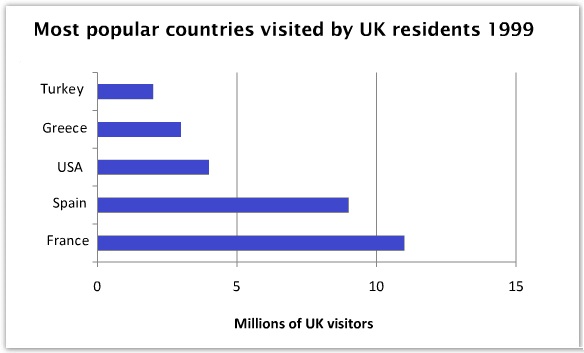 Model Answer 1:
The illustration outlines how many foreign tourists travelled to the UK and how many UK residents went out to travel between 1979 and 1999. Moreover, it also shows where those UK citizens went in 1999.

Overall, the influx of tourists in the UK was fewer than the number of British who travelled outside, and France was their favourite destination.

In details, 10 million tourists visited the United Kingdom in 1979 while around 13 million British spent their holidays out of the country. From 1979 to 1999, the outbound UK residents' number was higher than the inrush of foreign tourists in the UK. The gap widens in later years and finally in 1999, almost 55 million British left the country to travel outside while just over 25 million other nationalities entered the UK border as tourists.

France was the favourite destination to British travellers as more than 10 million British travelled there in 1999. With around 2 million UK tourists, Turkey was their least preferred holiday place. Spain was visited by approximately 8 million UK travellers which made it the second most popular destination this year. USA and Greece received the third and fourth most-visited places by UK tourists with between 2 to 3 million tourists each.

Sample Answer 2:
The diagrams show the number of international tourists who travelled to the UK, and British residents who travelled outside from 1979 to 1999. The data also presents the top 5 countries where UK citizens travelled in 1999.

Overall, the number of international tourists travelling in the UK kept on increasing after 1989, and more UK people travelled outside the UK than the number of tourists the UK received.

RSS
Nguyen Thuong Vu 2 years 6 months
The line graph illustrates the number of visits made by UK citizens to other countries as well as those by foreigners to the UK in a 20-year period, while the column graph shows five most preferred countries for Britons in 1999.

Overall, throughout the given time range, more English travelled to other countries than those who came to the UK. Additionally, in 1999, France was UK citizens' favourite destination.

According to the illustration, in 1979, precisely 10 million overseas residents visited the UK while this figure for the English going abroad was almost 15 million. After a decade, the number of both travels to and from the UK approximately doubled. However, visits to the UK flattened before reaching about 27 million in 1999, while the number of visits made by Britons to other countries skyrocketed to become 55 million by the end of the given period.

The data also shows that 11 million Britons visited France in 1999, which was 5 times more than the British visitors to Turkey. Spain was the second favourite destination for around 9 million UK travellers. As for Greece and the USA, the number of visitors from the UK was sequentially about 3 and 4 million.

Jeevan Vs 4 years 5 months
Not so good. No clear conclusion. Other points are good. Especially the term 'international tourist' was very good. But I will not accept it because there is no conclusion.

Meylis 4 years 7 months
It's too lengthy and the examiner will think it's overwhelming. No need to write that much explanation of changes. No percentage is given in the second bar graph, don't make something by yourself.

Aydan 5 years 5 months
You should include overall in your writing task 1 and we have to write "overall," in order to improve our score.

Azizbek 6 years 7 months
In writing task 1 we should not write the conclusion. It reduces our score. Your score, I think, is 5.5 or 6.

Hy 7 years 4 months
It is not a good contrast but the comparison part is really good.

Nima 7 years 5 months
The graphs show the number of travellers to and from the UK from 1979 to 1999, and 5 most popular countries where British people visited in 1999.

As is provided in the first graph, in 1979, the number of people who visited England was almost equivalent to British people who tripped to other countries which were 10 and 12 million respectively. After that, both of those groups swelled up momentously but the expansion of British travellers had more intensity than foreign people’s trend with gentle slope until 1986. In other scenarios after that year, the number of UK inhabitants who went to other countries rocketed noticeably and met 55 million as the peak in 1999 and other procedure amount increased and received 28 million in1999 as the summit.

Generally speaking, the gap between the number of visitors to and from the UK continuously grew and Franch was British tourists favourite destination.

Hi 7 years 9 months
The line graph exhibits data on the number of international tourists who travelled to the United Kingdom and the UK residents who travelled outside their country from 1979 to 1999. The bar graph data presents the countries where UK citizens visited in 1999.

As is observed from the given data, the number of international tourists travelling the UK kept on increasing after 1989 and more UK people travelled outside the UK than the number of tourists they received.

France was their most favourite destination where more than 10% UK vacationists travelled in 1999. The second most visited country was Spain where about 8% of total UK tourists travelled. Other countries visited by the UK tourists were the USA, Greece and Turkey.