The chart below shows the percentage change in the share of international students among university graduates in different Canadian provinces between 2001 and 2006. 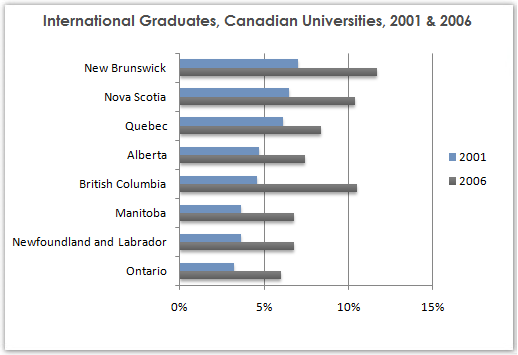 In summary, more international students went to study in Canadian Universities in 2006 than 2001, and New Brunswick and British Columbia were the two most favourite provinces for them in 2006.

RSS
Nguyen Thuong Vu 2 years 1 month
The provided bar chart illustrates the changes in proportions of international graduates in Canada, in 2001 and 2006. Data is categorized in terms of eight provinces in Canada.

As an overall trend, international students who graduated in Canadian universities increased quite noticeably. In addition, the most significant change took place in British Columbia.

To begin with, the percentage of university students from foreign countries in New Brunswick was approximately 7% in 2001. Also in this year, their figures in Nova Scotia and Quebec were also around 6%. The remaining provinces had less than this percentage of international graduates and Ontario possessed the lowest percentage of such graduates, standing at about 3 per cent.

After 5 years, this ratio in Ontario increased two-fold but was still less than the shares of the remaining provinces. Similarly, the proportion of international students in New Brunswick exactly doubled and continued to have the highest figure. It is also worth noticing that universities in British Columbia had 11% of international graduates in 2006 - a 7% rise and equaling the province of Nova Scotia. The figures in Manitoba and Newfoundland and Labrador were the same - 7%. And finally, the proportions of foreign graduates in Alberta and Quebec increased by one-third and one-fourth after five years to become 7.5% and 8%, respectively.

Ed 3 years 2 months
This is not a line graph!