The pie chart shows the amount of money that a children's charity located in the USA spent and received in one year. 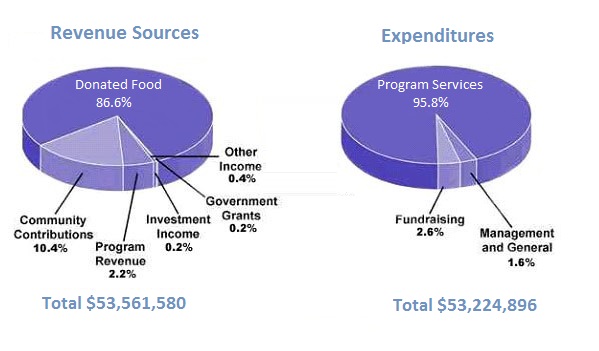 Model Answer 1:
The pie charts show the revenue sources as well as the expenditures for a year of a children charity organization based in the USA. Overall, donated food was the main source of fund of this charity organization whereas they spent most of their money on different program services.

The highest supply for the charity came as donated food which was more than 86% of the total earning. One-tenth of their trust was received from community contribution and the remaining 3% account was managed through program revenue, investment income, government grants and other income.

On the contrary, they exhausted more than 95% of the fund for program services and 2.6% for fundraising. Just over 1.5% of their expenditure was made for management and general purposes.

Model Answer 2:
The given pie charts illustrate how a children's charity in the USA collected and used its money in a year. The first chart is categorized into 6 different revenue sources and the second one is divided into 3 purposes of expenditures.

Overall, it can be seen that the foundation obtained the largest portion of its money from the donated food. On the other hand, it spent most of its money on the program services.

To begin with, 86.6 per cent of revenue for this children's charity came from donated food in a year, which is over eight times as much as contributions from the community (10.4%). These two sources accounted for exactly 97 per cent of the total income. Additionally, more than two per cent income was provided by the program revenue. Finally, the government grants and other income were almost unnoticeable, less than 0.5 per cent.

At the same time, the charity had to spend almost 96% on its program services. Regarding the remaining 4.2 per cent of expenditures, 2.6% was for fundraising and the rest was spent for management and general purposes. It is worth noticing that the total amount of income was $53,561,580, which was just enough to cover the expenditures of $53,224,896. At the end of the year, the charity had a saving of just over 330 thousand dollars.

Sample Answer 3:
The pie charts depict income and expenditure in a year by an American charity organization for children. Overall, the children's charity had exactly six sources of funds and among them, the ultimate source was food donation whereas they spent their money in three sectors and program services cost them the highest percentage of money.

While the charity largely spent money on the program service and it was precisely 95.8%, they vastly got their funds as donated food and it bought 86.6% of their yearly earnings. The second large income source was the community contribution, which was one-tenth; however, the second maximum cost was for the fundraising and it was 2.6% of the total cost.

Moreover, there were four other sources of revenue for this organization - program revenue (2.2%), investment income (0.2%), government grants (0.2%), and other income(0.4%). On the other hand, management and general cost accounted for 1.6% of the total budget and it was the lowest expenditure made by the charity. Furthermore, the total receiving fund was $53, 561,580 in a year and the total cost was $53,224,896 which shows just over 330,000 saving for the charity this year.

RSS
Yamuna 9 months
The two pie charts illustrate the revenue earning and the expenses over a year in a children's charity which is located in the USA.

Overall, this children's charity in the USA received income from six sectors. Among them, a huge income was received from donated foods. On the contrary, the highest expenses went on program services.

Now turning back to details, the first pie chart shows the charity's income from six different sources. Most of the income was received from donated food which was 86.6% of the total. It was followed by community contribution (just over 10%), and then program revenue that contributed to just 2.2% of income for the charity over a year. The least income source for the charity was government grants and investment income which was just 0.2% of the total income.

The second graph shows how the charity did expense their money. It is worth noticing that the children's charity organisation spent most of its income on program services which was more than 95%. It was followed by fund-raising activities which demanded 2.6%, and the least proportion of the money was devoted to management and general reason which was 1.6%.

Satnam 5 years 2 months
Hello Sir, I have a doubt about this task. As per the given statement, the Charitable Organisation spent and received money. So can you write this task in present form?

Julia 6 years 2 months
The given pie charts provide data on how the money was collected for a charity in the USA and where the amount was spent in a year.

Overall, the biggest revenue source for the charity was donated food and the highest expense was for the program services.

As is observed in the first pie chart, the total amount of money received exceeds the amount of money spent with more than 340 thousand dollars of difference. Overall, donated food amounted to 86.6%, making it the biggest revenue source. The second-largest financial contribution was made by the community with around 5 million dollars. Then, 2.2% of the money was received from the program revenue while investment income, government grant and other income sources contribute together with almost 1% of the whole budget.

The second pie chart clearly demonstrates that the biggest expenditure was done in program services which accounted for almost 96% of the whole amount. Fundraising took another 2.6% and management and general expenditures constituted 1.6% of the money.