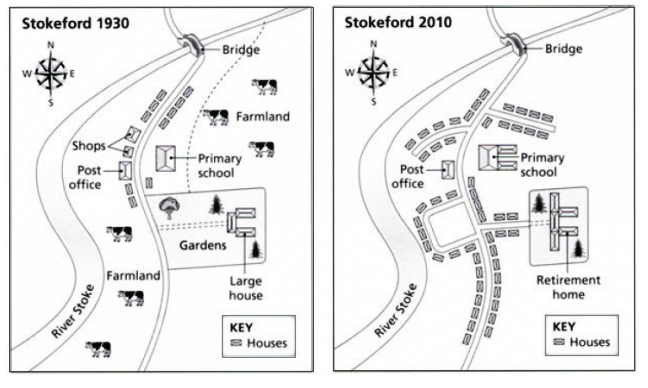 Sample Answer 1:
The pictures illustrate the development of the village of Stokeford that have taken place over a period of 80 years. In general, it is clearly shown that River Stoke and a bridge remained unchanged throughout the given period of time and many more houses had been constructed in 2010.

There were major changes in the village of Stokeford over the years. First of all, the shops located in the east of River Stoke were destroyed and more houses were built in 2010. The next noticeable feature is that the farmland in 1930 was demolished and it was converted into residential places with new roads being constructed. Furthermore, primary school was developed in 2010 and it was almost doubled in 2010 compared to 1930. Part of the gardens in 1930 was used for residential purpose by building more rows of houses near the main road. The left-over garden with a large house was then developed into a retirement home in 2010.

Model Answer 2:
The maps compare the structural developments and the transformation of a village called Stockford between 1930 and 2010.

A glance at the maps reveals that the Stockford village in 1930 had fewer houses and extended farmland but witnessed rapid housing development afterwards.

As is observed, Stockford village is located at the east of the River Stoke. Parallel to this river, the main road has connected a bridge in the farthest north-east side of the village in both maps. A few houses on both sides of the road, two shops and a post office on the west side of the road were present in this village in 1930. Besides, an elementary school, a large garden and a connecting road to the bridge were on the east of this village. Two large farmlands were quite visible in the early map which disappeared in the latter one.

The 2010's map reveals that the post office, the bridge and the primary school remained unaltered, though, the school building was enlarged. The shops disappeared and the garden with many of its trees was compromised to build more accommodation facilities. The large house was converted to a retirement home with some extension to its structure. On top of that, the number of houses increased remarkably and these houses were built on the previously existing farmlands and garden.

RSS
Madusha 1 year
The maps illustrate the changes that had occurred in the small town of Stokeford between 1930 and 2010.

Overall, it is noticeable that in 1930 the area was primarily a rural settlement, whereas, by 2010, it was transformed into an urban area. It is important to highlight that the bridge over the River stoke, the post office and the main road were the only structures that remained unaltered.

In 1930, there were several farms on both sides of the main road. In addition to this, some shops, a post office and several houses along the main road were present. Moreover, in the east part of the main road, a large house with gardens and a primary school next to it were visible.

By 2010, just the post office and the bridge over the river did not change. However, two small alleys were built - one at the northeast and the other at the northwest side of the main road. Along the main road and alleys, multiple houses were erected. The old farms and shops were abandoned to leave space for new housing projects. Moreover, a large house, with a garden in front of it, was converted to a retirement house, and no farmland was visible on the new map.

PePeT 4 years
The maps illustrate the changes that had occurred at the small town of Stokeford between 1930 and 2010.

Overall, it is noticeable that in 1930 the area was primarily a rural settlement, whereas, by 2010, it was transformed into an urban area. It is important to highlight that the bridge over the River stoke, the post office and the main road were the only structures that remained unaltered.

In 1930, there were several farms on both sides of the main road. In addition to this, some shops, a post office and several houses along the main road were present. Moreover, in the east part of the main road, a large house with gardens and a primary school next to it were visible. By 2010, just the post office and the bridge over the river did not change. However, two small alleys were built - one at the north-east and other at the north-west side of the main road. Along the main road and alleys, multiple houses were erected. The old farms and shops were abandoned to leave space for new houses. Furthermore, the large house was enlarged and transformed into a retirement home, and also, the primary school was expanded to accommodate more students.

Dennis Victor 4 years 2 months
Do we need to mention directions as well while explaining the map?

Rupinder Singh 4 years 5 months
I can be a really helpful person.

Yna 4 years 10 months
The maps illustrate the development works carried out in the town of Stokeford between 1930 and 2010.

In general, Stokeford town witnessed a dramatic transformation, especially, with the expense of farmlands to meet its increasing population.

In 1930, exactly 10 houses surrounded the village. The number increased five times by 2010. Moreover, a large proportion of Stokeford was occupied by farmlands in its north-eastern and south-western parts. In 2010, these were transformed into residential areas, building massive numbers of houses. The shops in the east of Stoke River were also replaced with townhouses with new roads being constructed. Furthermore, the primary school remained in the same area in the central part of the town, however, it later extended with two additional buildings. The huge house located in the far east of Stoke River was expanded and converted into a retirement home in 2010. The garden surrounding it was then occupied by rows of neighbouring houses. Over the next eight years, the post office, bridge, and Stoke River maintained distinct areas despite the extensive constructions in the surrounding areas.

Lekanaramideh 5 years 3 months
This is not a map, it's simply a layout.

Hiba 5 years 3 months
The given maps illustrate the layout of Stokeford village in 1930 and 2010 reflecting changes that had happened in the village during these eighty years.

Overall, Stokeford village was drastically transformed during the 80 years period.

In 1930 the Sotockford village had two large farmlands for cattle, a primary school, a post office, shops, a large garden and some housing areas. There was a bridge on the north side of the stock river which runs on the west side of the village. It is noticeable that a large portion of the village had open space. During eighty years, several refurbishments had been done, for instance, the farmlands disappeared, the primary school has been extended, a great number of new houses were built along both sides of the main road that connects the bridge to the village. Also, the central garden disappeared and the large house has been enlarged and transformed into a retirement home. Shops near the post office are no longer present and most of the houses were built near the roads.

Phoebe 5 years 10 months
Feel welcome to comment on my writing:

The maps illustrate how the village of Strokeford developed over two different periods (1930 and 2010). Overall, there was a massive development in Storkeford over the period given. It was palpable that all farmlands were replaced by the development of houses by 2010.

In 1930, Strokeford was a countryside village with a large scale of farmlands, which were located to the northeast and southwest of the village. There was a river running through Strokeford from the southwest to the northeast where a bridge was built for residents. Meanwhile, a garden with a few large houses on its right-hand side was situated in the middle of the village. To the north of the garden, a primary school was constructed along with some houses surrounding it. In addition, opposite the school, there were some shops and a post office.

By 2010, a massive development of houses was conducted in Strokeford by taking over all farmlands, shops and the garden. The size of the school was enlarged to meet the expanding population. Finally, those large houses expanded and became the retirement home in 2010.

IELTS Admin 6 years 4 months
Vocabulary related to describing Maps: Topography: The arrangement of the natural and artificial physical features of an area. Example: The provided maps depict the topography of Stokeford in 1930 and 2010.

Shob 6 years 4 months
The given maps depict the topography of Stokeford in 1930 and 2010. It can be clearly seen that lots of changes had taken place in Stokeford in 2010 than that of 1930’s Stokeford area.

In 1930, a large portion of the area was being used for farming in Stokeford and there were farmlands beside the primary school and the river Stoke. Various houses were built on these farmlands and there was no farmland in 2010. Again, there were two shops in 1930 and they were demolished to build more houses. There was a large house which was surrounded by the Gardens in 1930 and a retirement home was constructed in place of that private property in 2010. Also, more area was allocated for the primary school and there was a rapid expansion to accommodate more students.

Overall, a massive change took place in Stokeford between 1930 and 2000 and all the area allocated to farming in 1930 was allotted to build more houses.

Lee Swet Ying 6 years 6 months
The maps represent changes that took place in the village of Stokeford in 2010 compared to that of 1930.

Overall, the River Stoke, bridge, post office, and the primary school remained the same and many new houses could be observed in the new map.

In 1930, "River Stoke" river was present and the farmland was located at the right-hand side of the river. However, housing areas replaced it in 2010. The post office building remained the same. Moreover, there were shops next to the post office. It is noticeable that these shops were no longer present in the latter year as the place was used to construct a road and more houses were built.

Another feature that had been changed was the garden which was located at the centre of the map in 1930. There were trees in the gardens before the houses were built to replace it. Besides, a large house was located inside the gardens in 1930 which was converted to a retirement home in 2010. Farmland was located at the top right-hand corner of the map in 1930 which had also been destroyed. There was no change to the primary school building but two houses were built next to it.

Andrew 6 years 8 months
Are shops in the west of the River? Are you sure? Please double check that and do not forget to read E W S N on the direction. For your kind information conclusion is not mandatory in Academic Task 1.

Ravinder Singh 6 years 8 months
Shops are in the west of river Stoke rather than the east. The format is also wrong. It should be like the introduction, paragraph, striking features, paragraph 2, comparison and finally the conclusion.