The pie charts below describe average household expenditures by major categories in Japan and Malaysia in 2010. 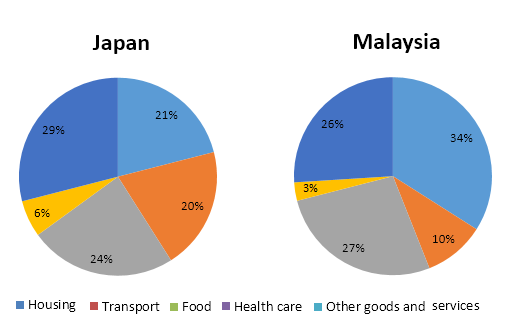 Sample Answer 1:
The pie charts depict the proportions of money spent on households in Japan compared to Malaysia in 2010 based on five categories namely- housing, transportation, food, healthcare and other goods and services.

As illustrated, most of the expenditures in Japan was made on goods and other services, comprising 29% of the total expenditures compared to Malaysia, which only spends 26%. Food came as second priority for both countries with 24% and 27% of total household costs respectively. Housing in Japan is placed as the third priority with an average of 21% expenditure in comparison to Malaysia, which places their housing as their major expenditure. Furthermore, money spent for transportation fall as the fourth priority with an average of 20% in Japan and 10% in Malaysia. Lastly, healthcare was observed to be the least priority for both countries comprising 6% and 3% of the total expenditures.

Overall, pie charts indicate that the main expenses in both countries were on goods and services, food and housing, while transportation and healthcare were given least prioritised.

Model Answer 2:
The presented pie charts compare the expenses of Japanese and Malaysian people in five household categories in 2010. As can be seen from the given illustration, housing in Malaysia required just over one-third of the total cost while transportation in Japan demanded exactly the double cost than that in Malaysia on an average.

As is evident from the given diagrams, food expenditure in Malaysia (27%) was slightly higher than that of Japan (24%). Different goods and services required the highest expenditure for Japanese while it was food that cost the Malaysian the most. Heath care drained 6% money for an average Japanese which was exactly double than the cost in Malaysia. However, just over one-third of the money in Malaysia went on housing while it was just over one-fifth in Japan. Malaysian people spent 26% of their total cost for different service and goods which was 3% lower than that of Japan.

In summary, shelter, food and different commodities and service drained a lion share of a Malaysian’s earning while Japanese people spent more on products and service, foods, transport and housing in 2010. Finally, Japanese people had to spend more on medical services than that of Malaysians.