The line graph below gives information about men and women smokers in Bhutan from 1960 to 2000. 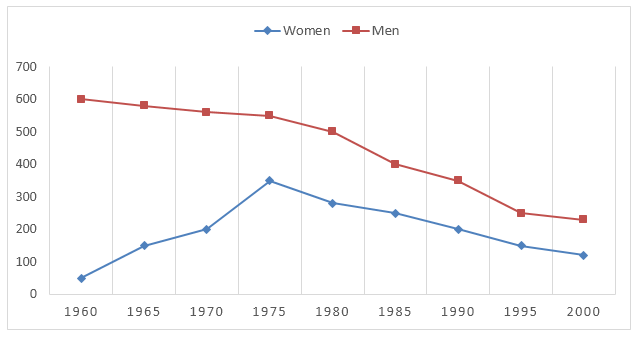 Model Answer 1:
The diagram compares the male and female smokers in Bhutan and shows the smoking trend among the people of Bhutan over a 40 years’ period commencing from 1960. As an overall trend, the percentages of male smokers decreased after 1980 while the ratio of female smokers increased over the given period.

Sample Answer 2:
The line graph compares the male and female smokers in Bhutan between 1960 and 2000. Overall, the smoking rates among men and women clearly declined over the time and the ratio of male smokers decreased while the opposite was true in the case of female smokers.

In 1960, six hundred men out of 1000 were smokers. This number dropped gradually to 500 by 1980 and continued to fell till 1980. Afterwards, this trend accelerated and the ratio of Bhutanese male smokers plunged to just over 20%. On the contrary, the ratio of female smokers in 1960 was quite low. But in five years, the female smokers’ percentage climbed to around 15 and increased steeply to over 30%. Afterwards, the female smokers’ percentage is Bhutan dropped gradually till 2000 when around 2 out of ten females smoked. Initially, in 1960, the gap between the men and women smokers was huge but over the time this gap reduced and almost a similar percentage of females and males in Bhutan smoked.

RSS
Nguyen Thuong Vu 2 years 10 months
The given line graph illustrates the changes in smoking habits of Bhutanese men and women between 1960 and 2000. The figures for smokers range from 50 to 600 in every thousand.

Overall, it is observed that men smoker were higher in number than women smokers throughout the period. Another look at the graph suggests that smoking rates saw a decline over time. More specific information will be summarized below.

To begin with, 60 per cent of all Bhutanese men had the habit of smoking in 1960, which was 12 times the ratio of women in the same year. For the next 15 years, the number of men smokers saw a slight drop to 550 per 1000 while the figure for women sharply increased by 7-fold.

From 1975 to 2000, the pattern dipped dramatically for both genders. In detail, by the end of the given period, the ratios of Bhutanese male and female smokers were 250 and 150 in every thousand, respectively. It is also worth noticing that the gap between male and female smokers, in the end, was narrowed down to one-fifth of that in 1960.