Write a report for a university lecturer describing the information shown in the diagram below. 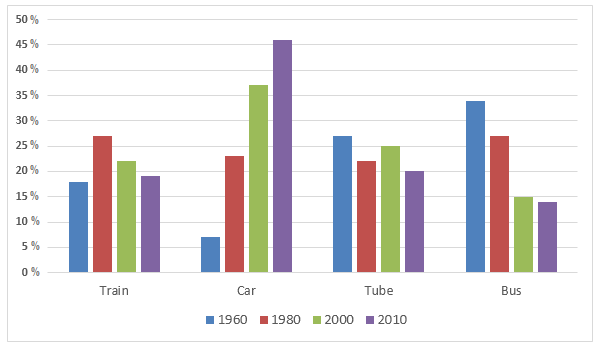 Sample Answer:
The column graph compares the percentages of Londoners who used trains, cars, tubes and buses in four different years. Overall, the use of private cars increased rapidly while the popularity of public buses dropped sharply.

As can be seen, roughly 7% commuters used private cars in London in 1960. In this year the highest percentages of commuters in London used buses and tubes, approximately 35% and 27% respectively. Train users in this year comprised around 17% of total passengers. After 20 years, the percentages of car users dramatically increased and one out of five Londoners used this mean of transport. Trains, buses and tubes received similar percentages of travellers in 1980 which ranged from 23% to 26%. However, the ratio of these transport users in 2000 changed noticeably. Every passenger out of three used their cars while one out of four used tubes for their movements. The popularity of the train somewhat decreased while the ratio of bus commuters dropped sharply to only 15%. In 2010, around half of the Londoners used cars as they primary mean of communication while less than 15% used public cars. The popularity of tubes and trains slightly dropped in this year as well.