The bar charts and line graph below show the results of a survey conducted over a three-year period to discover what people who live in London think of the city.

What are the best things about living in London? 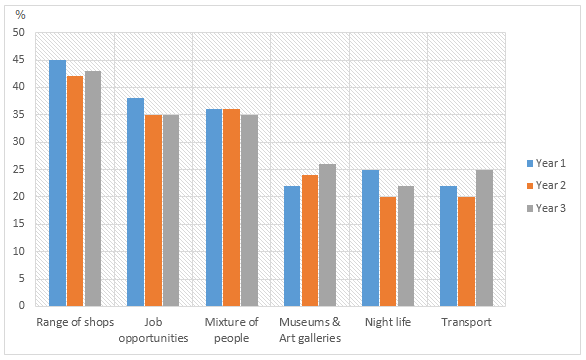 What are the worst things about living in London? 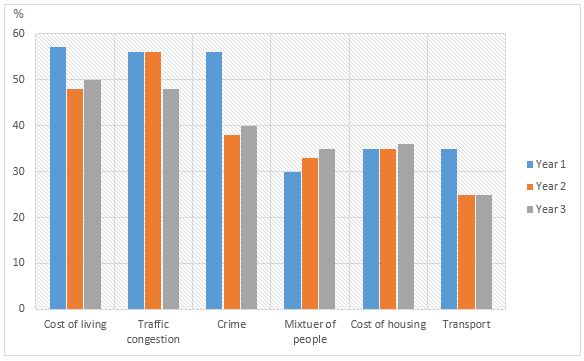 Are these things a major problem in London?
(% of people answering ‘yes’) 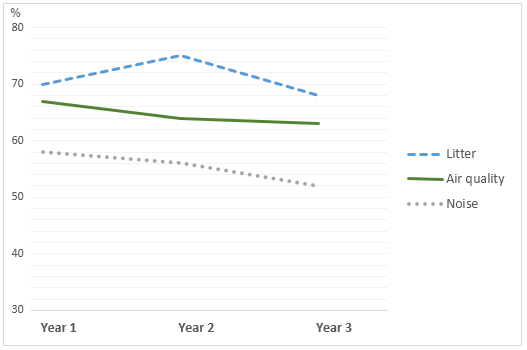 Sample Answer 1:
The graphs reveal data of a survey that shows how Londoners feel about living in London by expressing the greatest and worst thing they face. The data also presents the ratio of these people who think litter, air quality and noise are some primary concerns. Generally speaking, freedom of shopping, employment and multicultural environment are the best things about London while costs, crime and mixture of races are the main hindrance of quality life in London, according to the survey takers.

The bar graphs consider people’s opinion in three years regarding the paramount and poorest aspect of living in London. As is presented, the highest percentages of Londoners, roughly 42-45 percent, think that the range of shopping is the best thing they enjoy about London. Around 35% Londoners voted for job and cross-cultural citizens as main advantages. Night life, places to visit and transport facilities were picked by approximately 20-25% people in these years as the main attraction for dwelling in London.

Living and housing costs, traffic jam and crime were picked by a significant percentage of people as the vilest thing about this city. Interestingly, while some people consider multicultural environment and transports as two main benefits of living in London, more than one third possess an opposite view. Crime was a great problem in the first year but over the time, fewer percentage of people showed their concern about it.

Finally, garbage problem was mentioned by the highest ratio of people, 70-75% as a great concern in London while around 65% and 55% on an average considered air quality and noise to be a major problem for living in London.

Sample Answer 2:
The illustration expresses the opinion of Londoners across three years about the paramount and poorest aspects of living in London. Overall, shopping, job, night life and places to visit were picked as the greatest things about living in London while cost, traffic jam and crime were picked as the vilest thing there. Interestingly, cross-cultural people and transport were voted both as good and bad aspects about this city.

The highest percentage of Londoners, over 40%, believe that shopping experience in London is the best thing about living in this city. Around 35% of them picked employment facilities as the second most attractive aspects in London. Activities like night life, visiting places were mentioned by one-quarter of them as advantageous. On the contrary, half of them expressed their concerns about the cost of living. A similar presentence of the survey takers expressed traffic congestion as a hindrance for their living. Crime was another worst thing about London according to these survey participants.

Interestingly, cross-culture and transports were both mentioned as great and worst thing about life in London. Finally, majority of the citizens expressed their apprehensions about litter, noise and air quality to be major issues.

RSS
Kishore 2 years
The graphs reveal the data of a survey conducted over 3 years about the likes and dislikes of people living in London and the line graph specifically shows what are three major problems in this city are.

Generally speaking, the variety of shops, job opportunities and the mixed ethnicity of people occupy the top three positions on what people like the most about London. Meanwhile, the cost of living, traffic and crime stand at top of the dislikes. Additionally, litter is one of the major issues Londoners face.

In details, shopping is the most popular thing among Londoners with approximately 43 per cent positive voting while the availability of job opportunities and mixed ethnicity follow at around 36 and 37 per cent respectively. Nightlife, museums and the means of transport seem to be the less liked features of London which ranged from 20 to 25% positive voting.

The cost of living and congestion are the two worst problems faced by the inhabitants with more than 50 per cent of the people agreeing to it followed by crime. But, crime has significantly reduced as a problem after the first year from 55 to 40 per cent over the 3 years. The cost of housing, transport and the mixture of people are among the other disliked.

The quality of air, waste management and noise pollution are the major problems face by the population with litter being the worse with around 70 per cent agreeing to it.