You should spend about 20 minutes on Questions 29-40 which are based on the text below.

Read the text below and answer Questions 29-40.

During the first year of a child’s life, parents and carers are concerned with its physical development; during the second year, they watch the baby’s language development very carefully. It is interesting just how easily children learn a language. Children who are just three or four years old, who cannot yet tie their shoelaces, are able to speak in full sentences without any specific language training. 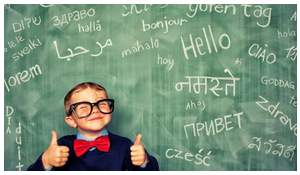 The current view of child language development is that it is an instinct – something as natural as eating or sleeping. According to experts in this area, this language instinct is innate – something each of us is born with. But this prevailing view has not always enjoyed widespread acceptance.

In the middle of last century, experts of the time, including a renowned professor at Harvard University in the United States, regarded child language development as the process of learning through mere repetition. Language “habits” developed as young children were rewarded for repeating language correctly and ignored or punished when they used incorrect forms of language. Over time, a child, according to this theory, would learn a language much like a dog might learn to behave properly through training.

Yet even though the modern view holds that language is instinctive, experts like Assistant Professor Lise Eliot are convinced that the interaction a child has with its parents and caregivers is crucial to its developments. The language of the parents and caregivers act as models for the developing child. In fact, a baby’s day-to-day experience is so important that the child will learn to speak in a manner very similar to the model speakers it hears.

Given that the models' parents provide are so important, it is interesting to consider the role of “baby talk” in the child’s language development. Baby talk is the language produced by an adult speaker who is trying to exaggerate certain aspects of the language to capture the attention of a young baby.

Dr Roberta Golinkoff believes that babies benefit from baby talk. Experiments show that immediately after birth babies respond more to infant-directed talk than they do to adult-directed talk. When using baby talk, people exaggerate their facial expressions, which helps the baby to begin to understand what is being communicated. She also notes that the exaggerated nature and repetition of baby talk helps infants to learn the difference between sounds. Since babies have a great deal of information to process, baby talk helps. Although there is concern that baby talk may persist too long, Dr Golinkoff says that it stops being used as the child gets older, that is, when the child is better able to communicate with the parents.

Professor Jusczyk has made a particular study of babies” ability to recognise sounds and says they recognise the sound of their own names as early as four and a half months. Babies know the meaning of Mummy and Daddy by about six months, which is earlier than was previously believed. By about nine months, babies begin recognizing frequent patterns in language. A baby will listen longer to the sounds that occur frequently, so it is good to frequently call the infant by its name.

An experiment at Johns Hopkins University in the USA, in which researchers went to the homes of 16 nine-month-olds, confirms this view. The researchers arranged their visits for ten days out of a two week period. During each visit, the researcher played an audio tape that included the same three stories. The stories included odd words such as “python” or “hornbill”, words that were unlikely to be encountered in the babies’ everyday experience. After a couple of weeks during which nothing was done, the babies were brought to the research lab, where they listened to two recorded lists of words. The first list included words heard in the story. The second included similar words, but not the exact ones that were used in the stories.

Jusczyk found the babies listened longer to the words that had appeared in the stories, which indicated that the babies had extracted individual words from the story. When a control group of 16 nine-month-olds, who had not heard the stories, listened to the two groups of words, they showed no preference for either list.

This does not mean that the babies actually understand the meanings of the words, just the sound patterns. It supports the idea that people are born to speak, and have the capacity to learn language from the day they are born. This ability is enhanced if they are involved in a conversation. And, significantly, Dr Eliot reminds parents that babies and toddlers need to feel they are communicating. Clearly, sitting in front of the television is not enough; the baby must be having an interaction with another speaker.

Complete the summary below.

Choose no more than THREE WORDS AND/OR NUMBERS from the passage.

Write answers in boxes 29-34 on your answer sheet.

Do the following statements agree with the views of the writer in the passage “How babies learn language”?

In boxes 35-40 on your answer sheet write

35.  Children can learn their first language without being taught.
36.  From the time of their birth, humans seem to have an ability to learn languages.
37.  According to experts in the 1950s and ’60s, language learning is very similar to the training of animals.
38.  Repetition in language learning is important, according to Dr Eliot.
39.  Dr Golinkoff is concerned that “baby talk” is spoken too much by some parents.
40.  The first word a child learns to recognise is usually “Mummy” or “Daddy”.