The table below shows the number of medals won by the top ten countries in the London 2012 Olympic Games. 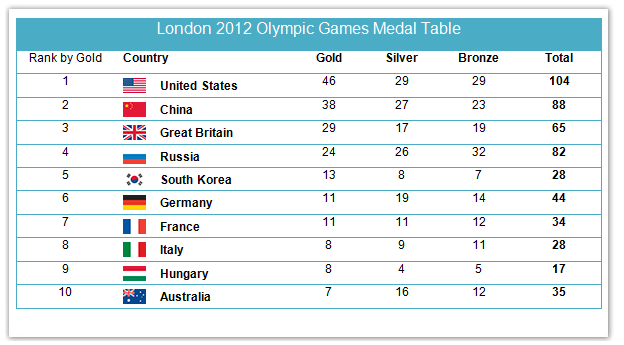 In details, the US athletes won 104 medals in total, the highest, and they also achieved the greatest number of gold (46) and silver (29) medals. The highest number of Bronze medals (32) was won by Russian participants. Two Asian countries that were in the top-ten-list were China and South Korea. China won 88 medals in total, of which 29 were gold medals. South Korea was in 5th position with their 28 total medals. UK and Russia were in 3rd and 4th positions respectively with 65 and 82 medals. Although Russia won more medals than the UK, they were in 4th position because the UK participants won more gold medals which seem to have better points than silver and bronze medals to be in the top position.

Other countries who were in the top-ten-list were Germany, France, Italy, Hungary and Australia with less than 50 medals each. The least gold medal-winning country was Australia and they were in the 10th position of the list.

Overall, the United States won the majority of the medals, while Hungary stood at the tenth position in the list.

In details, the United States was the country that managed to win the highest number of Olympic medals of all kinds (104), with gold, silver and bronze accounting for 46, 29 and 29 respectively. Following the US, although China managed to win the second-highest number of gold and silver medals (38 and 27 respectively) with a total of 88 medals, the primate for the second-highest bronze medal went to Russia, with 32 medals. Then, the country that stood at the fourth place was the UK, with 65 medals, among which 29 were gold medals.

Looking at countries that won the lowest number of medals, Hungary was the one who registered only 17 medals with the lowest silver and bronze titles. However, Australia possessed the least number of gold medals with only 7 pieces. Whilst South Korea and Italy equally won 28 medals, France and Germany managed to win slightly fewer than the average of all the medals won by the 10 countries, with figures of 34 and 44 respectively.