The pie charts below show the average household expenditures in a country in 1950 and 2010. 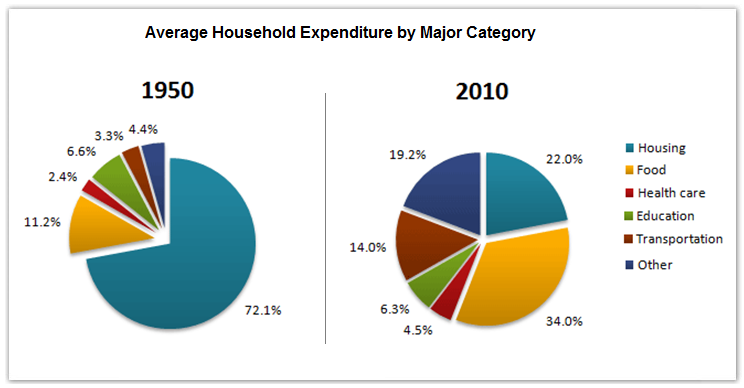 Sample Answer 1:
The two pie charts compare the average nationwide expenses on several household categories including housing, food, healthcare, education, transportation in 1950 and 2010. The expenditure ratio for food soared in 6 decades while an overwhelming portion of the expenditure went on for housing in 1950.

Now turning to the details, the bulk of the expenses in 1950 was made for the housing and food which accounted for a massive 72.1% and 11.2% of the total expenditures. In opposite, it can be observed that people prioritised buying food (34%) more than housing (22%) six decades later. Health care had the lowest amount of money spent on in both of the years. In addition, transportation expenses had remarkably increased by roughly three times from only 3.3% in 1950 to 14% in 2010. Aside from that, spending on other items also rose to 19.3% from 4.4% in 1950. Education expense ratio, however, had slightly decreased where people insignificantly spent 0.3% more in 1960 than in 2010.

To summarise, basic necessities such as food and housing are the two main categories people spent most percentages of money on, however, health care aspect was the least prioritised.

In summary, the expenditure nature of people had changed significantly in 2010 than that had been in 1950 and it is obvious that expenses on food upsurged.

Model Answer 3:
The two pie charts compare the household outlay in a country by major categories in 1950 and 2010. Overall, in both years, significant expenditure went on for accommodation and food which together covered the most of the expenditure. However, in 2010, spending ratio escalated for the food while decreased for the housing.

In 1950, nearly two-thirds of the expenditure of people went on for the accommodation and more than 11% on food. The expenditure on housing plummeted in 2010, 72.1% to 22.0% while it almost trebled in the case of the food. Healthcare expenditure ratio, on the contrary, was the lowest, only 2.4%, and it increased by almost 2% in 2010. Similarly, the outlay on transportation was elevated in 2010 by nearly 10%. The cost ratio for education was 6.6% in 1950 which slightly decreased after six decades. Other categories attributed to only around 4% expenditure and it roughly quintuple during the period.

In summary, the housing drained the highest percentages of money for the people in this country in 1950 and after 60 years it reduced while the ratio of expense on foods increased remarkably.

RSS
Rohit 10 months 20 days
Can you please evaluate the below essay?

The graph shows the differences in average household expenses of a nation in 60 years of time span. Overall, housing was the most expensive household category in 1950 and food cost almost trebled in six decades.

In 1950, the household expenditures for housing was around 72.1% of total income - the highest among the given categories. The second highest was for food with 11.2%. For healthcare, the expense ratio was just 2.4%, while for education it was 6.6%. Moreover, 3.3% of the expense was in transportation and finally, 4.4% for other expenses.

Bold Erdenebold 1 year 4 months
A glance at the two pie charts provided reveals the normal family budget in a particular country over the sixty-year period, starting in 1950 and finishing in 2010.

In detail, an average family in 1950 spent nearly three-quarters of their total spending. This spending witnessed a plunge from 72.1 per cent in 1950 to a low of just 22 per cent in 2010. Their food budget, meanwhile, represented the second biggest spending of households in 1950, which became the highest overall in 2010, reaching at 34 per cent this year.

Moreover, expenditures on other categories such as transportation had increased from 3.3 per cent by 1950 to 14 per cent by the end of 2010. Similarly, the cost of other spendings saw a rising trend, growing from only 4.4 per cent to 19.2 per cent in 2010. The cost of education, however, slightly dropped to 6.3 per cent of total expenditure in 2010. By contrast, the percentage of spending on health care nearly doubled during this period, rising from 2.4 per cent to 4.5 per cent.

Overall, the families in this country spent almost three-quarters of their earnings on housing while the cost of their food increased significantly during this period. Moreover, spending increased noticeably for transportation, but there were corresponding drops to expenditure on things such as housing and education.

Divya 4 years 1 month
The pie charts illustrate average household expenditures in a country by comparing the changes in the expenses in 2010 than that of 1950. The most striking feature to note is that in 1950, people dissipated the maximum earning on housing, whereas in 2010, the area of interest shifted to food.

Looking at the details, in 1950, people's expenses on housing were approximately three-fifths of their earning. However, in 2010, this share of expense declined and comprised of only one-fifth of the amount. Another significant change worth mentioning is related to food. In 1950, around 11% of expenditure was on it, whereas in 2010, this soared three folds. Besides, drastic changes were seen in transportation and others, whereas in 1950, these two areas comprised of only around 3% and 4% of spending, but it showed a significant rise and reached to nearly 14% and 19% respectively. The ratio of expenses for healthcare changes marginally but remained almost the same for education. In 1950, people in this country spent 2.4% and 6.6% on healthcare and education respectively which reached nearly 4.5% and 6.3% consequentially in 2010.

Parbati 4 years 4 months
The piechart illustrates the amount of money spent on 6 household materials in a country in the years 1950 and 2010.

Overall, a large amount of money was spent on food while in health care, comparatively a low expenditure was made.

Jay 4 years 4 months
Dear Mentor, If I write any task 1 in your comment section, then will you please check that for me like any mistakes or something?

Su 4 years 6 months
I am confused about the word 'expense'. When it refers to one subject, then I use 'the rate of expense' spent on something? When do I use plural expenses or should it be always singular like expense?

Phoebe 5 years 10 months
The pie charts compare the percentage of household spending on different categories in a particular country in 1950 and 2010.

Overall, there were 6 categories of household expenditures that fell into housing, food, health care, education, transportation and other items. People spent most on housing in 1950 and on food in 2010, whereas the least amount of money was spent on health care across both years.

In 1950, the amount of money spent on housing occupied the majority of expenditures which accounted for 72.1%. This figure dropped dramatically to only 22% by 2010. In contrast, spending on food was the second-highest household expenditure in 1950, increased by 3-folds to just over a third in becoming the largest proportion 60 years later.

On the other hand, there was a palpable surge in the expenditure on health care, transport and other items from 2.4%, 3.3% and 4.4% to 4.5%, 14% and 19.2% respectively over the period given. Interestingly, the proportion of education expenditure was relatively stable at a mere below 6.5% in both years.

Ayman 7 years
Please, could you tell me which one is grammatically correct? - The provided pie charts shows (as you wrote up) or ( show ) as you did in other bar charts, I noticed you wrote them like 'show' and 'shows' in different tasks.

In general, the largest proportion of expenditure was for housing in 1950 whereas spending on food overtook housing in 2010, becoming the main expenditure category among the six categories.

In details, the average household spent almost two-third of their earning on housing in 1950. This ratio dropped to nearly one-fifth in 2010, which denotes a significant decrease. Cost on food, however, showed a contrasting trend. In 1950, people spent just 11% to buy food which dramatically rose to exactly 34% - more than one-third of their total income. While both expenditures on transportation and other increased by more than 10% over 60 years, there was a slight drop in the percentage of education expense from 6.6% to 6.3%. Transportation cost increases significantly as well, from 4% of their income to 14% of their income in 60 years. Finally, health care remained as the smallest payment in both years, at 2.4% and 4.5% respectively.

Nerkar, Dhanashree 2 years 7 months
What marks can I get for my below-written report?

[Note: We have first reviewed and edited your report and then published it on our website. So it may look a bit different than your original writing.]

The pair of pie charts elucidate average domiciliary expenses for the years of 1950 and 2010 in 6 major household categories like housing, food, healthcare, education, transportation and others in a country.

Overall, average accommodation cost was overwhelmingly high in this country in 1950 which reduced in recent years while food cost increased many-fold.

The first diagram clearly promulgates that the amount of money spent on housing was the highest in 1950 which was about 72% of total household expenses followed by the nearly 11% cost for food. However, 6 decades later, an obverse scenario could be observed where the call for edibles hiked to approximately 3 times than in 1950, leaving behind the expenses being made in housing at just 22% in 2010.

Furthermore, an appreciable amount of growth can be seen in the divisions of public ease like 'Transportation' and 'Others', covering over 14% and just over 19% of the entire cost in 2010. Also, the healthcare sector rolled to double its expense requirement to 4.5% than that in 1950. Finally, average expenses education was 6.6% which interestingly has slightly decreased after 60 years than that of 1950.

[Remark: In our review, your report has received a band score of 6.5, which could have been 7.0 if there was no spelling and minor grammatical mistakes. Moreover, please note that the data is about expenses by the average household, it is not about investment.]