The graph below shows the differences in wheat exports over three different areas. 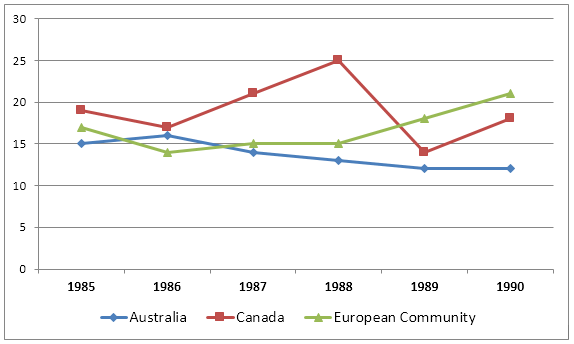 Sample Answer 1:
The given line graph compares the wheat exports over three different parts of the world namely Australia, Canada and the European Community from 1985 to 1990. As is presented in the graph, the wheat export in Australia decreased over time while the export in Canada and European countries increased with some fluctuations.


Sample Answer 2:
The line graph elucidates the wheat exportation of three regions, namely Canada, Australia and European community from 1985 to 1990. As can be seen, Canada was the leader in wheat trading till 1988 and after that, the European Community became the leading wheat exporter among the given regions.

Model Answer 3:
The line graph compares the quantity of wheat Australia, Canada, and the European Community exported between 1985 and 1990. Overall, the European Union’s wheat shipping increased over the time while Australia experienced a downward trend in its wheat trading. Although wheat exports of the three given areas have fluctuated, Canada had the most noticeable oscillations throughout the given period.

Sample Answer 4:
The line graph illustrates changes in wheat export by Australia, Canada, and the European Community within a five-year period - from 1985 to 1990. Overall, what stands out of the graph is that wheat export by the European Community increased over the period, whereas Australia witnessed a gradual decrease in the period considered. Although wheat exports of the three areas fluctuated, Canada had the highest oscillations throughout the interim.

One of the first things to note is that Canada was the country whose wheat exportation comprised nearly 20 million tons in 1985. In the following year, the rate of export fell and then quickly recovered reaching a peak of 25 million tons in 1988. However, this figure fluctuated over the years, finishing surprisingly the same as it was at the starting point.

European Community initially exported less than Canada, but its outcome turned out more than the other two countries at the final point- over 20 tons. In contrast to the other two areas, Australia exported 15 tons in 1985 and saw a slight decrease over the period except in 1986.

RSS
Oyon 2 years
The line graph compares three regions (Australia, Canada, and the European community) in terms of their wheat export over 5 years period, from 1985 to 1990. Units are measured in million tonnes.

Overall, the European community experienced a growing trend in shipping wheat to other countries, whereas the opposite was true for Australia. And, Canada's wheat export figures exhibited a fluctuating pattern throughout the period.

As is shown in the graph, Canada exported 20 million tonnes of wheat in 1985 which was higher than the other two regions. Although it decreased slightly in the following year, a steady increase can be noticed from 1986 to 1988, reaching a peak of exactly 25 million tonnes, which was by far the highest quantity of wheat export compared to other countries. This figure then plummeted to about 14 million tonnes. However, in the final year, Canadians managed to raise its export to around 17 million tonnes.

Regarding the export of Australia and the European Community, both had exported roughly 15 million tonnes in 1985. Despite a rise in the following year, the former saw a declining trend throughout the period before hitting 12 million tonnes in 1990. The latter, nevertheless, experienced a slight fall in 1986 until levelling off at 15 million and then surging rapidly to reach a peak of about 21 million tonnes in the final year.

Nouf 3 years
In other times, write the conclusion, please.

Answer: The line graph shows the wheat export in three different parts of the word between 1985 and 1990.

Overall, wheat export from Australia decreased over time while the wheat exports by the European community had increased over the period. Furthermore, Canada's export after a rise and a fall remained at a stable level.

European community's export, on the other hand, fluctuated during the 5 years period. It exported 17 million tons of wheat in 1985 and after a year, it decreased to 14 million tons. Finally, this quantity went up to 15 million tons. Between 1987 and 1988, it stayed constant and rose gradually to 21 tons in 1990. Finally, Australia's wheat export had a rise of 3 million tons at first year but after that, it dropped to 12 million tons until 1990.

Marinda 6 years 2 months
Could you please give me an appraisal for my essay? I am a new IELTS student and I need your help. Best regards -

Amir 2 years 10 months
Hi, I am professional IELTS student. I wonder if we can have a discussion about every part of IELTS.

Overall, wheat export from these three regions showed some fluctuations and in later years, the European community exported the highest quantity of wheat.

Mohsen 6 years 6 months
The given chart compares wheat exports scenario by three various regions, namely - Australia, Canada and the European community during 5 years, between 1985 and 1990.

Overall, the European community's wheat export developed during the time and had the minimum fluctuations, but Canada exported the highest quantity of wheat in a year which was 1988.

Overall, Canada witnessed the highest changes in its wheat export during the given period and Australia managed the minimum export in later years.

As is presented as a census of a perusal in the provided illustration, in 1985 these amounts were 19, 17 and 15 million for Canada, the European community and Australia respectively. These proportions decreased for Canada and the European community in 1986 but in Australia, it increased. After that, wheat export by Australia declined and reached 11 million in 1990. Canadian export witnessed two big fluctuations - first, it swelled up rapidly and met 25 million as the summit in 1988 and second, it plunged to under 15 million in one year and then rocketed on and received to 19 million in 1990.

In another scenario for the European community, it was almost the same without any noticeable changes until 1988. B0ut after that, its ratio grew up and achieve 22 million tones in 1990.