Chorleywood is a village near London whose population has increased steadily since the middle of the nineteenth century. The map below shows the development of the village.

Write a report for a university lecturer describing the development of the village. 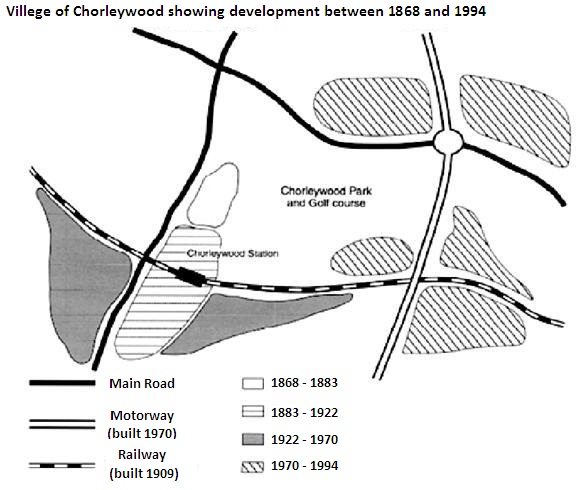 Model Answer 1:
The illustration delineates how the development of Chorleywood village in London took place from 1868 to 1994, over a period of 125 years. Generally speaking, development works in this rural area proceeded much rapidly during 1970 to 1994 than that or previous decades.

As the graph suggests, improvement in Chorleywood village was limited during the 19th century when area surrounded the Chorleywood station witnessed some development works. The railways were introduced in 1909 and it went across the station area and formed the ground for a wider development and constructions between 1922 and 1970, end of which the motorway was established in this village. The village went through rapid developments between 1970 and 1994 and had a wider roadway at this time. It is worth noticing that development and constructions in Chorleywood were guided by the transportation facilities as the junction areas witnessed a faster and large-scale progress than other areas. The park and the Golf course are in the middle of the village and train, road and motorways formed a hash (#) like road system in Chorleywood.

According to the diagram, the motor road was established in 1970 while the railway was built in 1909 in Chorleywood. Before 1900, only a portion of the village was developed and later (between 1883 and 1922) the station was built and some development works were finished. The area near the station was then improved and during the end of this construction, in 1970 to be precise, the motorway was completed. After 1970, the expansion process seemed accelerated and many areas of the village came under the renovation process. At the beginning of 20th century, the railway was built.

The land roads including the motorway, roads and railroads of this village connect almost all of the parts of the city and forms and hash like shape. The progress in this area had been done mostly based on the establishment of the transportation systems but the park and the golf course were placed in the middle of the village.

RSS
Anindita Sarker 1 year 2 months
The diagram delineates a map of a village called "Chorleywood" near London, and it illustrates the development in the village between 1868 and 1994. The map primarily shows the development of the transportation system and the nearby area over a period of 125 years.

Oyon 2 years 7 months
The map illustrates how Chorleywood village developed over more than a century.

In general, what stands out is that the village had gone through a lot of developments in terms of expansion and transportation routes. It is noteworthy that the majority of the expansion occurred between 1970 and 1994.

Looking at the village on the 18th century, there were only two main roads, one running from northern-west to east side and another from north to southern-west, with only a small village along the mid-east side of the latter main road. However, this village expanded along the same main road from 1883 to 1922. Moreover, in 1909, the expanded portion of the village got a new railway station, which had a railway route from the east to the west side of the map.

Sajan Preet Kaur 6 years 5 months
I am still not clear about the construction of Chorleywood station. And can we mention the development process of this village first and later on the railways and motorways because by my mindset the map depicts that these developing areas were constructed and the ways of transportation are over taking it. Is there any teacher around here, so please answer and as soon as possible. I've my exam very soon. Thanks.

Lee Swet Ying 6 years 7 months
The map shows the development works, specifically transportation development, that had taken place in the Chorleywood, which is a village near London.

In details, road communication was first developed in Chorleywood village in the nineteenth century and then the development of motorways took place in conjunction with the increase in population in the middle of the nineteenth century. Finally, the railroad was introduced in 1909 in this village and that was expanded till 1994.

IELTS Moderator 6 years 8 months
If there is no way to be sure of the directions, you are not obliged to write it. You will not lose marks for that.

Jisha 6 years 8 months
If no direction is mentioned in IELTS writing task 1, map question, is it essential to write directions like north, south... Will it affect our band score? Please reply me.