The charts below show the levels of participation in education and science in developing and industrialised countries in 1980 and 1990. 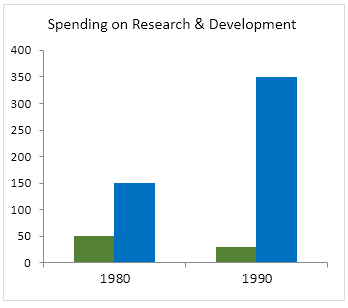 Sample Answer 1:
The bar charts compare the average years of education, learners' participation in science-related career as well as research spending in developing and developed countries from 1980 to 1990.

Sample Answer 2:
The given bar graphs compare the educational involvements of students in term of total years of education and their participation in science-related subjects in developing and industrial countries from the year 1980 to 1990.

RSS
Anika 2 years 7 months
The bar charts compare average years of schooling, the number of scientists and technicians per thousand people, and spending on research and development between developing and industrialized countries.

The second chart shows that the number of scientists and technicians in developing countries per 1000 people was fewer than 10 in 1980 and fewer than 20 in 1990. On the contrary, in industrialized countries, it increased was over 40 in 1980 which almost doubled after 10 years.

Finally, the last chart delineates the decline of expenditure of developing countries on research and development. It decreased about 50% in 10 years while in developed countries it almost trebled.