The chart below shows the GDP growth per year for three countries between 2007 and 2010. 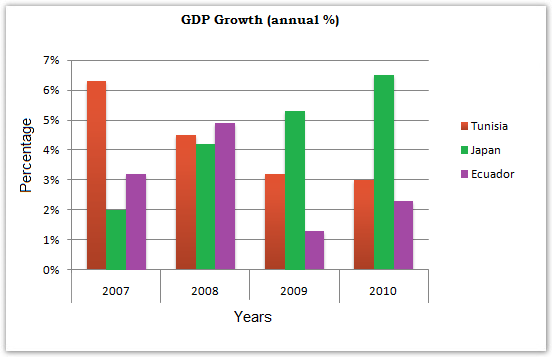 Model Answer:
The provided bar chart shows data on annual GDP of Tunisia, Japan and Ecuador between 2007 and 2010. As is observed from the given data, the annual GDP growth of Tunisia and Ecuador had decreased over the period while the percentage of GDP had increased remarkably in Japan.

In summary, the annual GDP growth in Tunisia and Ecuador decreased while it increased remarkably in Japan over the given period.

RSS
Jerin Jose 6 years 6 months
Hi, I don't think you need to write the conclusion when it says summerise. You only need it when the question asks you to write a report.

Sukanya 6 years 10 months
The bar chart elucidates the annual GDP growth in three countries, Tunisia, Japan, and Ecuador between 2007 and 2010.

Overall, annual GDP in Japan increased faster than that of Ecuador and Tunisia as the year advanced. The Gross Domestic Product growth in these countries exhibited a varying trend and Japan managed to show a significant improvement while it was downgraded in case of Tunisia and Ecuador.

As is observed, initially in 2007, the annual GDP growth of Tunisia was over 6% whereas the GDP growth in Ecuador was only half of that. Japan, in this year, had the least GDP progress rate - only 2%. Interestingly, in 2008, all these three countries attained a 4-5% GDP growth, improvement for Ecuador and Japan while decreasing GDP growth in Tunisia. As the year progressed, the GDP increase in Japan got momentum whilst the other countries’ GDP decreased significantly except the 2% GDP growth in Ecuador in 2010.

Japan reached the top of the GDP growth in 4 years in 2010, with more than 6% and this was slightly over the beginning GDP growth of Ecuador in 2007.