The chart below shows male and female fitness membership between 1970 and 2000 in Someland. 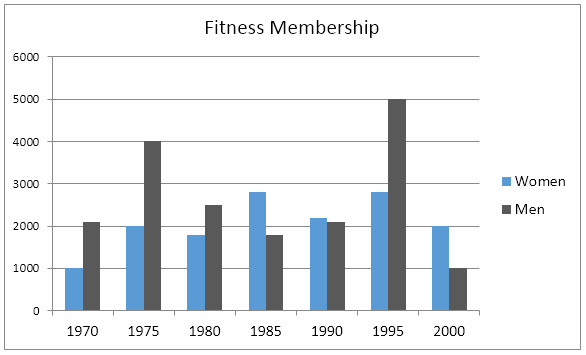 In summary, the number of fitness member increased till 1995 and finally in 2000, the number reached to a similar pattern where it was in 1970.

Overall, the highest number of memberships can be seen in 1995, as the figure for both the male and female participants was greater than that of the remaining years.

To begin with, 1000 women and slightly more than 2000 men enrolled in this fitness club in 1970. After 5 years, the number of both men and women members approximately doubled. Then in 1980, male memberships decreased significantly to 2500 (which meant a drop by 1500) while for women, the number also dropped but by roughly 100.

Additionally, the male member's number continued to dip and hit the point of about 1900 in the year 1985. This figure increased continually for a decade, however, it then declined dramatically in 2000. As observed from the bar graph, male memberships in the years 1995 and 2000 were 5000 and 1000, respectively.