The following chart illustrates the results of a British survey taken in 2005 related to Housing preferences of UK people. 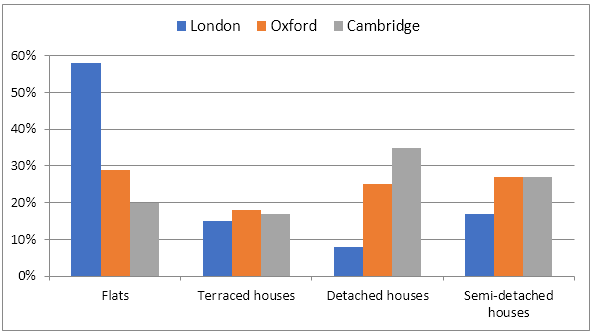 Sample Answer:
The given bar graph shows data on the housing preferences of UK citizens and this data was taken as part of a survey made on 2005. As is observed from the data, most of the London dwellers preferred flats while detached & semi-detached houses were more popular among the people of Oxford and Cambridge.

To summarise, the survey result summarises that flat was the most preferred housing solution for London people while Oxford and Cambridge's people preferred detached and semi-detached housing.

RSS
Nguyen Thuong Vu 2 years
The provided bar chart displays the preferences of Britons regarding their choices of three types of houses. The data is based on a survey carried out in the year 2005.

It is revealed that London and Oxford dwellers preferred flats while those in Cambridge mostly liked to live in detached houses.

In detail, the proportion of citizens in Oxford who favoured flats stood at almost 30%, which was half of that of Londoners. And interestingly, roughly the same percentage of people in Oxford liked detached and semi-detached houses. At the same time, around 15% of those in London preferred terraced and semi-detached houses while detached ones were least favoured, representing less than one-tenth.

Conversely, about 35% of those in Cambridge preferred the latter, while exactly 20% wanted to have flats. It is also worth noticing that the proportions of citizens who preferred terraced houses in all three regions were quite similar - almost a fifth.

Sukanya 6 years 3 months
The bar chart illustrates the housing choices of British people from three areas based on a survey conducted in 2005.