The table below shows the figures for imprisonment in five countries between 1930 and 1980.

Figures (in thousand) for imprisonment in five countries between 1930 and 1980. 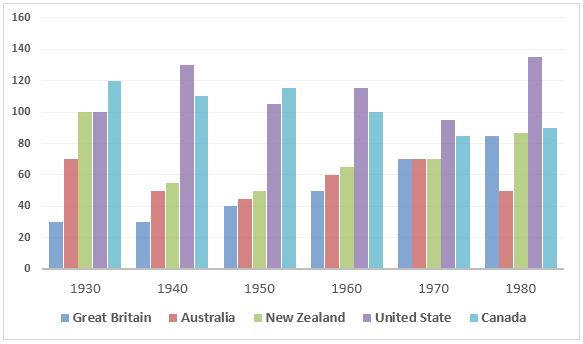 Sample Answer 1:
The bar graph shows the number of imprisonment in five countries - Britain, Australia, New Zealand, the US and Canada, between 1930 and 1980.


Sample Answer 2:
The graph presents data on the figures for imprisonment in five countries from 1930 to 1980.

Overall, the data shows considerable fluctuations in the figures for imprisonments in those countries while showing no solid pattern.


Sample Answer 3:
The chart compares the numbers of prisoners from 1930 to 1980 in five different countries, namely Great Britain, Australia, New Zealand, the United States and Canada.

At a glance, the imprisonment figure in the USA and UK climbed over the period and in Canada, Australia, and New Zealand, it actually declined.

It is clearly seen that the United States had the highest number of inmates. Also, Britain had the lowest figure in 4 out of 6 years. In 1930, the number of prisoners in the United States was the highest, with 120 thousand prisoners, then this number increased significantly to reach a peak of 140 thousand in 1980. By contrast, Britain had the lowest figure for prisoners until 1970, then the figure jumped suddenly to reach 90 thousand.

Sample Answer 4:
The bar chart depicts the number of prisoners in thousands, in five different countries, namely Great Britain, Australia, New Zealand, the United States and Canada during a period of 50 years commencing from 1930.

Overall, the graph gives an impression that the incarceration rate in the USA and UK escalated over time while in Canada, Australia, and New Zealand, it actually decreased.

As is evident in the presentation, Great Britain had the lowest number of imprisonment throughout the initial 40 years till 1980. Interestingly, Britain had witnessed a steady growth in figures, which started from around 30000 in the year 1930 and reached around 70000 in the year 1970. By contrast, the United States had the maximum number of criminals throughout the entire span of years except in the first decade, which is 1930. Moreover, in the year 1980, the United States had to imprison the highest number of citizens in the entire period, which accounted for around 130000.

It is apparent from the graph that the crime rate in Canada had fallen gradually and steadily, from 120000 people in 1930 to a significantly less 90000 people in 1980. However, except for the years, 1930 and 1980, Australia had considerably less number of jailing and New Zealand had always positioned as the top three consistently just behind Canada and the United States.

RSS
Anindita Sarker 1 year 2 months
The provided bar graph shows the figures for incarceration in five countries between 1930 and 19080 with an interval of 10 years. The five countries are Great Britain, Australia, New Zealand, the United States, and Canada.

It is conspicuous that the United States had the highest number of prisoners followed by Canada.

What is being compared in the given data source is the number of prisoners in 5 English spoken countries during a period of 50 years commencing from 1930. Overall, that imprisonment figure in the USA and UK increased over the period given. In contrast, in Canada, Australia and New Zealand it decreased.

Dear Mentor, here in question - it's mentioned "BETWEEN 1930 AND 1980", which means 50 years or 5 decades but in the given table, 6 BAR CHARTS were shown. So which one is correct or what to follow?

Its time to wake up.

Marky Al Detoure 5 years 10 months
The diagram depicts the number of detainees in thousand from the year 1930 up to 1980 in five different nations. As is observed from the bar graph, the United States had been the leading country that had the largest number of convicted felons while Great Britain had the least among the given countries.

In the United States in the year 1930, the number of convicted prisoners was just 100,000 and it started to fluctuate until it reaches the highest point of around 135,000 in the year 1980. Meanwhile, the opposite trend could be observed in Great Britain, where the figure just started at about 25,000 in the year 1930 and levelled off in 1940. the number of felons in the UK then started to increase moderately with an upward tendency up to the year 1970 which contained more than two folds of that 1930, and suddenly dropped to around 45,000 in 1980. Moreover, New Zealand and Australia had an almost similar pattern of trends when it came to their convicted prisoners, in which they vary only in 1980, with constituents of around 45,000 and about 85,000 prisoners respectively. Finally, in the case of Canada, in 1930 there were 120,000 prisoners and it continued to fluctuate up to 1960 with 100,000 and slightly decreased to around 85,000 and remained steady until 1980.

Arko 6 years 6 months
Usually, you do not need to repeat all the time but write a few times so that the examiner can recall what number you are talking about.

IELTS Mentor 6 years 6 months
It is better to show comparison and contrast, where relevant and presenting main data of the chart.

Rojan 6 years 6 months
I want to ask a question. In the first sample, it does not show full data and only makes comparisons. Is it necessary to show full data?

Siddharth Trivedi 6 years 6 months
Dear Mentor, here in question - it's mentioned "BETWEEN 1930 AND 1980", which means 50 years or 5 decades but in the given table, 6 BAR CHARTS were shown. So which one is correct or what to follow?

IELTS Mentor 6 years 10 months
Both would be correct. We would advise you not to repeat the same word over and over again and using numbers.

Philomina 6 years 10 months
Dear mentor, I'd like to ask which one is correct? - to repeat each time prisoner or whatever, or I can right the numbers only.