The chart below shows the amount spent on six consumer goods in four European countries. 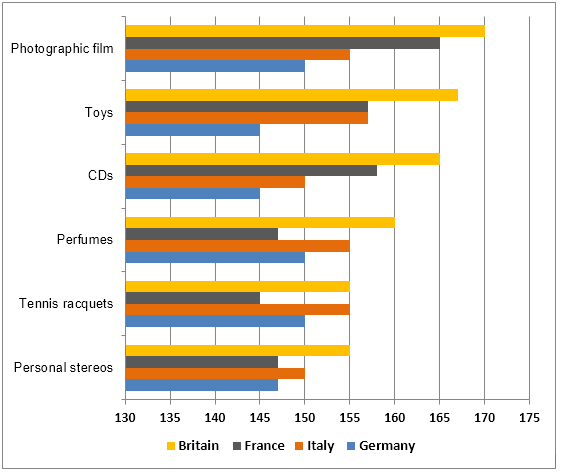 At the first glance, British spent more money on consumer products while Germans spent the least.

It is worth noticing that, British spent more than 170 thousand pound sterling for photographic films which is the highest amount spent on any consumer goods. British also spent more than 160 thousand for purchasing Toys and CDs, which is higher than that of by any other nation. For perfumes, tennis racquets and personal stereos, they spent more than other nations as well. On the other hand, French people spent around 165 thousand for purchasing photographic films, which makes it the highest amount they spent on consumer goods.

French citizens spent about 158 thousand on toys which is a tie with Italians. For photographic films, toys and CDs, their spending totalled second highest among the given four nations. Finally, they spent less than 150 thousand on remaining consumer goods.

Italian citizens spent around 150 thousand on personal stereos, tennis racquets and CDs while they spent about 5 thousand more on photographic films and toys. Finally, Germans spent the fewer amount in all consumer items than any other nation and their average spending was 145 thousand.

Overall, British, among the four countries, spent most of their money in all the six consumer goods in contrast with Germany spending the least amount for those products.

British also spent the highest amount to purchase photographic films while France spent the least amount on tennis racquets. In terms of photographic film, Britain spent well above 170 thousand pounds. This is the highest money spent on any consumer goods. France came in the second position in terms of their spending which was more or less 165 thousand. Italians and Germans compared to the two latter countries, spent around 150,000 and 145,000 respectively. Toys and CDs are the second and third most purchased by the 4 countries.

Furthermore, Britain and France purchased tennis racquets the least with only around 155000 and 145000 respectively. Italy spent the least of their money in buying personal stereos with exactly 150000 same as well in Germany spending around 3000 pounds fewer than that of Italy.


Sample Answer 3:
The bar graph compares the spending on six consumer products by citizens in four European countries. Overall, British spent more on these products than the citizens in other three countries did and their highest amount went on purchasing photographic films, toys and CDs.

British disbursed the highest amount for obtaining photographic films and toys and these amounts stood at 170 and 167 thousand pounds. French people spent 5-6 thousand less on these two items but their spending was higher than the amount paid by Italians and Germans for these two items.

Spending on CDs by English was slightly lower than that of toys, 165 thousand and Germans spent the least amount on this product. Finally, British people spent 160 thousand for buying perfumes and it was 155, 150 and around 146 thousand by Italian, German and French respectively.

Jessica 2 years 6 months
The bar chart illustrates the expenditure by the citizens of Britain, France, Italy and Germany in six categories of consumer goods, in thousand pounds. Overall, it is clear that English spent more than other nations in all the categories, while Germans spent the lowest in most of these consumer categories.

The most purchased product for Britons and French was the photographic film, with £170,000 spent by British, the highest amount of all the six categories, and £165,000 by French. At the same time, in Britain, approximately £165,000 were spent on toys and CDs, while around £155,000 were spent in France. Perfumes, Tennis Racquets and Personal stereo were the least purchased goods in both countries, with British spending £5,000 more in Perfumes, with £160,000, while France spending the least amount of all the figures, just around £145,000 for the three products.

Moreover, Germans spent £150,000 in films, tennis racquets and perfumes, and just around £145,000 for the other products; again the least amount of money of all the categories. Finally, the most purchased product in Italy was Toys, with just over £155,000. Photographic films, Perfumes and tennis racquets closely followed toys with £155,000, while just £150,000 were spent CDs and Personal Stereos.

Anu Chandy 2 years 9 months
The bar chart compares the money that is being spent on six different consumer goods by the citizens in four European nations, namely- Britain, France, Italy and Germany.

Overall, the Brits spend more money on utility products compared to that of the other countries, while the Germans purchase less of these goods.

Walaa 3 years 11 months
The bar chart illustrates the expenditure on six consumer products in Germany, Italy, France and Britain measure by pounds sterling.Overall, British spends the highest amount of money on all consumer goods. French spend the least to purchase personal stereos, tennis racquets and perfumes and Germans are not big purchasers of these items. The highest amount of money is spent on photographic films by all the 4 countries, reaching as high as £ 170 thousand in Britain, followed by France, Italy and Germany. Italians and French spend a similar amount on toys, which is approximately £160000. These four countries’ spending pattern on CDs are similar to that of photographic films with a narrower difference (almost £152000 to 162000).Citizens of France spend the least amount of money on tennis racquets, approximately £144 thousand, and it is the lowest money spent by any of these countries. Germans' expenditure for all the goods is similar, around £ 146 thousands for each item. Interestingly, Germany, Italy and France have approximately equal spending on personal stereos (£145 thousand).

Charanjeet 3 years 11 months
Is this answer enough for 6 band score?

Nicole 4 years 2 months
Hello, my friend! I wish to say that this post is amazing, nice written and include approximately all important information. I would like to other posts like this.

Kani 4 years 6 months
Hi! Thank You for the samples, I am learning a lot from them. Although, in such scenarios, is it safe to assume that the amount spent will be in thousand pounds and not in something else maybe Euros or any other trade unit? I did not see it was mentioned anywhere in the question.

Sanat Singha 4 years 9 months
Should I mention the names of all products and countries?

Gurjeet Singh 4 years 10 months
The horizontal bar chart outlines how much money citizens in four countries spent on six consumer goods. Overall, it can be seen Brits spent more on these goods compared to their counterparts.According to the graph, it is obvious that photographic film was accounted for 170 thousand pound investment which was higher than each of the remaining nations. This was the biggest spending on any consumer goods by a nation as well. French citizens spent 5 thousand less and Italians purchased 155 thousand pounds of this item. Concerning over toys, the spending of Germans could be seen at 145 thousand pounds, the lowest, which was around 22 thousand less than the spending of British on this item. In addition to this, for Cds, Germans spent the same amount as they did for toys. Brits, as usual, spent the highest, about 167 thousand to but toys. Moving further, on perfumes and tennis racquets purchase amount in these European countries except Britain remained between 145 and 155 thousand pounds. Proceeding further, personal stereos was reported for 147 thousand in France and Germany.

Jörn Matzen 5 years 5 months
In my opinion, the expression "money spent on consumer goods" is the passive form of 'to be spent' and necessarily does not indicate the past tense. For instance, the book given to me lies on the table.

Sayda 5 years 11 months
Hi, why is it written in the past tense?

Nahid 6 years 1 month
Dear Mentor, if I write the same as you did, can I get band 9 in writing task?

IELTS Mentor 6 years 2 months
Dear Sachin,Thanks a lot for pointing it out. We have corrected the spelling.

Sachin 6 years 5 months
Dear IELTS mentor,Kindly correct the France spelling in the given chart which is in the coloured form.

Dorji 6 years 5 months
This chart shows how much money (in pound sterling) was spent on six consumer products in four European countries. It is very clear that Britain is the leading nation amongst other five European countries that spent the highest amount of money in these six consumer products, followed by France, Italy and Germany. Interestingly, from these six countries, Germany is the only nation that spent nearly equal amount of money on these products, ranging from 145,000 to 150,000 sterling pounds. Regarding photographic film and CDs, Britain spent the highest amount of money followed by France, Italy and Germany in descending order. As for toys, France and Italy both spent 189,000 pounds. Regarding the money spent on photographic films, there has been a huge variation amongst these four countries; Britain spent 171,000 pounds, France 168,000 pounds, Italy 156,000 pounds and Germany 145,000 pounds. But there could be seen a slight variation in expenditure on stereo production by these countries. Overall, according to this data source, British lavished in these products, while German were a bit more moderate consumers of these products.

Marinda 6 years 10 months
Dear mentor, thanks for your great effort, but excuse me, both answers are not accurate because Germany is not the least country in spending money. Germany is the least on only 3 categories photographic films, toys and CDs. On the other hand, France is the least country in spending in perfumes and tennis rackets. While in terms of personal stereo Germany and France are equal. Best regards.

IELTS Mentor 7 years 3 months
Dear Houda, if you look at the question you will notice that it says 'the amount spent on six consumer goods'. The word 'Spent' indicates that the expenses listed here are from the past and that's why we used past tense. Hope that clarifies your doubt.

Houda 7 years 3 months
Thanks for this website. I learnt a lot from it. My question is why are you using the past tense while the date is not mentioned?

Javad 7 years 9 months
Actually, it is a good Idea for paraphrasing.

Talvinder 8 years
You add British end of one para but it is Britain.