The graph below shows the quarterly sales figures of Woodward chocolate bars for 2010. 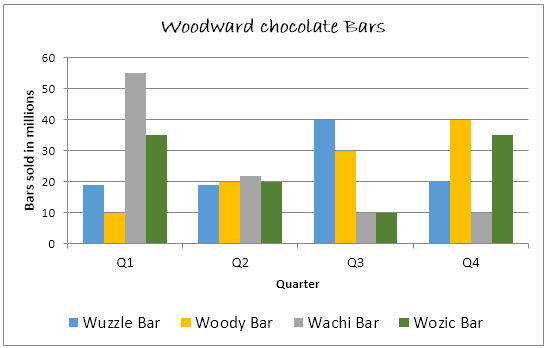 Sample Answer:
The provided bar graph shows sales data of Woodland chocolate for the year 2010. As is observed from the given data, Wachi Bar was the most sold chocolate bar in the first quarter of the year while the popularity of Woody bar increased over the time for the given year.

In summary, there was a common pattern of the sales volumes of the four chocolate types for the year 2010 except that the sales amount of Woody bar increased in each quarter while this volume decreased for the Wachi bar.

RSS
Nguyen Thuong Vu 2 years 2 months
The provided bar chart shows the changes in the number of Woodland chocolate bar's sales volume, in a calendar year. Information is categorized into 4 different types of chocolate bars in four quarters of this year.

Overall, sales of Woody chocolate bars increased while those of Wachi declined. Additionally, in the first quarter, the sales volume was the highest.

Then, in the next quarter, the sales of all 4 types of bars were around 20 million. This meant a sharp decrease in Wachi bars sales, by 35 million. During the same time, Wozic bar sales also decreased but less noticeably while an exactly 2-fold increase can be seen regarding sales of Woody bars.

Sales of Wachi bars furtherly dipped to 10 million and remained at this point by the end of the year. In sharp contrast, Woody bars became a best-seller, with 40 million sold between October and December, as the sales rose stably every quarter. For Wuzzle and Wozic, sales of these 2 types ranged from 10 to 40 million per quarter as observed in the last 6 months of the year. Sales of the former type declined while the exact opposite was true for the latter one.

And finally, it is worth noticing that the numbers of chocolate bars sold in the second, third and fourth quarter were all somewhere from 80 to 90 million.