Graph Writing # 28 - Hour of leisure time per year for people

The table below gives data on the hour of leisure time per year for people in Someland.

Write a report for a university lecturer describing the information in the table below. 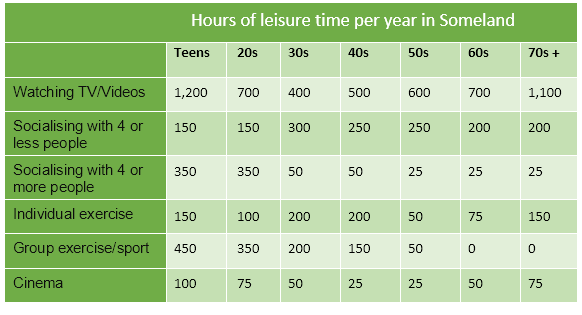 Sample Answer 1:
The data presented in the table outlines how much leisure time people from different age groups spend yearly in Someland. It is obvious that watching TV is a popular form of free-time activity for Somelanders.

According to the figures, watching TV is a common recreation among people in Someland, teenagers and elder people watch TV even more. They spend over a thousand hours per year to watch different TV programmes while it ranges from 400 to 700 hours among others. Young people have more friends to socialize while this number decreases when they grow up. Teens spend as much as 350 hours socializing with 4 or more friends while it is only 25 to 50 hours for adults and elders. On the contrary, people in their thirties spend the highest time socializing with fewer people. Individual exercise is preferred by people in their 30s and 40s while group exercise is more popular among teenagers. Elder people mostly refrain from doing exercises in their free time. Watching cinema is not a common leisure activity among  Somelanders and teenagers spend 100 hours doing so which is higher than time spent in this pursuit by citizens of other ages.

Model Answer 3:
The table shows data on the leisure activities of people from different age groups in a year in Someland. Generally speaking, watching TV and videos is the most preferred free time activity for people of all age groups while time spent yearly on other leisure activities vary based on people’s age.

According to the table, young and older people spend more leisure time watching TV programmes and other videos than the people from other age groups. TV watching consumes 1200 hours for teenagers and 1100 hours for elder population. This is the most popular leisure-time activity of people as they spend more time on this activity than others. Socialising with more people is popular among teenagers while with the increasing age, people prefer to socialise with fewer people. Teenagers and young adults like group exercise while it is avoided by people who are above 60 years old. People from 30 to 40 seems like spend around 200 hours per years on individual exercises.

Finally, watching movies in a cinema hall comprises 100 leisure hours for teenagers while it kept on decreasing with the increase of their age except for the 70 plus population who spend more time on this activity than 20 to 70 years old people.

(These model answers can be followed as examples of a very good answer. However, please note that these are just a few examples out of many possible approaches.)

RSS
Rinki 2 months 24 days
The supplied table illustrates information on the number of hours invested by individuals of different groups in a year in their leisure time on distinct purposes in a particular nation named "Someland".

Overall, as is observed, majority of people spend their free time watching TV programmes whereas the least number of masses show interest in group exercise.

It is clear from the table that watching TV is the most favourite leisure activity among people of two groups - such as teens and septuagenarian and they spend above 1000 hours per year in this activity. However, other groups spend hours between 400 to 700 watching TV. Additionally, on average, approximately 200 hours are invested by individuals of different ages per year on socialising with less than 4 people while socialising with more than 4 were less common among individuals, only teens and adults like this.

Turning to the rest of the description, interestingly, most people like to do exercise alone but people spend fewer hours per year on exercise with others. Amazingly teens are the only group who spend 100 hours per year on cinema but other groups spend less than 100 hours in this free-time activity.

Nguyen Thuong Vu 1 year 5 months
The provided table illustrates how people in Someland spend their free time. As can be seen, watching TV or videos is the most common recreation for them.

Somelanders use more than 5000 hours each year for watching TV or videos. Those in their 40s have the least amount of time watching TV, which is 500 hours, while the figures regarding teens and those 70s+ are more than double that figure. When it comes to socializing with many people, older people spend less time doing this while it is most popular among people in their 30s.

On the other hand, people from 30 to 39 years old have twice as much time as the following decades meeting 4 or fewer people, while this trend gradually decreases as they get older. Somelanders between the age of 50 and 69 use less than 80 hours each year for individual exercises, and those over 60 don't take part in group exercises at all. Conversely, teenagers and 20s join group sport for more than 300 hours yearly.

Finally, enjoying movies in a theatre is not very popular among Somelanders. It does not surpass 100 hours for any group, and this activity is just common among teens and least popular for people in their 40s or 50s, with just 25 hours spent yearly.

K 2 years 9 months
The table compares durations per year that Someland’s population spent on six activities in their free time. Overall, TV & Video watching was the most popular activity for all, and teens spent most of their time on almost all these events except for solo exercise and small group social gathering - which were, interestingly, more popular among people in their 30s and 40s. Participation in group activities, such as group socializing and group sports, were comparatively more common among teens and person in their 20s while were less preferred by the elders.

People from all age groups spent the majority of their free time watching TV & Video, ranging from 400-700 hours per year but teens and elderly people watched it for over 1100 hours. Going to the theatre to enjoy movies was the least popular pastime activity among the citizens in Someland and finally, people from most of the groups, except for the 60s and 70s, did not exercise in a group at all.

In addition to watching TV, almost all these recreational activities were also most popular among teens because they were the leader in group socializing, group exercise, and watching cinemas with 350, 450, and 100 annual hours dedicated to those activities respectively. Meanwhile, other solo activities such as exercise and the small social group were more popular among the middle age group of the 30s to 40s at 200 and 150 annual hours for the first activity and 300 and 250 hours for the latter; however, there was an insignificant difference between each age group's time spent on such activities. On the other hand, time spent on group activities such as social socializing for a group of 4 and group sports correlated directly with the age as teens and 20s joined such activities more.

Ahmed 5 years 6 months
That's why it is called an example! It just shows the way.

Jamuna 7 years 5 months
I think this description is wrong in time duration.