The charts below show the percentage of food budget the average Australian family spent on restaurant meals in different years. The graph shows the number of meals eaten in fast food restaurants and sit-down restaurants. 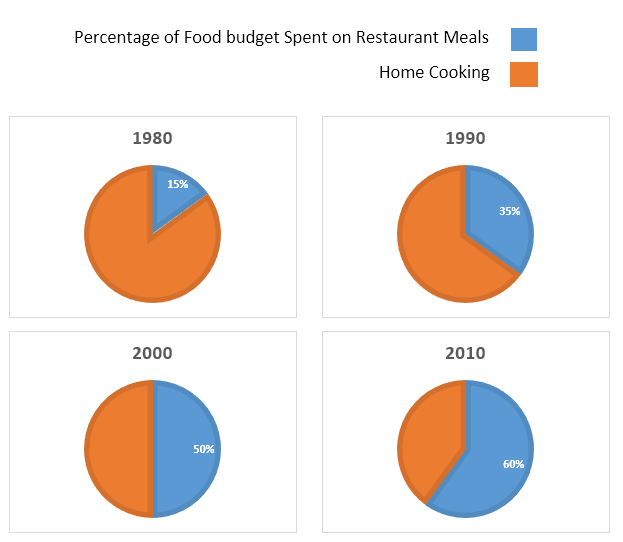 Sample Answer 1:
The pie chart and line graphs reveal that average Australian families during 1980 to 2010 took more interests in restaurant meals and fast food meals became quite popular among them.

Analysing the data presented in the pie charts reveals that an average Australian family spent only 15% of their food budget on outside food while the remaining 85% was spent on preparing food at home. Over the period, Australians started spending more on restaurant meals and started spending half of their budget on outside food just in 20 years. In 2010, they spend 60% of their food budget on bistro foods and that was a quadruple increase just in 30 years.

Based on the line graph, Australians ate 20 meals both in a fast food shop and in a sit-down restaurant in 1970 and this number gradually increased in the next 20 years when the fast food became more popular in terms of the number of meals eaten by an average Australian in a year. The gap between the fast food and restaurant meal eating increased dramatically and in 2010 more than 110 meals were eaten in a fast food shop while this number was just above 60 in the case of sit-down restaurants.

Model Answer 2:
The pie charts elucidate the ratio of food budget average Australian families spent for preparing foods at home and for dining in eateries in four decades. The line graph outlines the number of meals these Australian families ate in two types of restaurants between 1970 and 2010. As is observed, Australians’ budget for outdoor meals increased overwhelmingly over the decades and fast food meals were more popular than that of sit-down restaurants among them.

The data suggest that preparing food at home in Australia was the main trend in 1980 and only 15% food fund were spent to dine outside but the spending ratio to have restaurant meals increased to 35% next decades. In 2000, average Australians spent exactly half of their food budget to eat at bistros. Interestingly they spend sixth-tenth of their budget to enjoy restaurant foods in 2010 which was exactly four times higher than that of 1980.

RSS
Ali 5 years 3 months
It was the hardest writing task ever. I didn't know where to begin.

Đoàn Minh Nguyệt 6 years 5 months
I don't know how to write this process!!!

Kathi 8 years 3 months
Hello there, I found your website by means of Google at the same time I was looking for 'IELTS resources', your website came up, it looks great.