The charts below show the Medical research funding amount in millions of Dollars in Someland and also shows the death number for this area.

Write a report for a university lecturer describing the information in the graphs below. 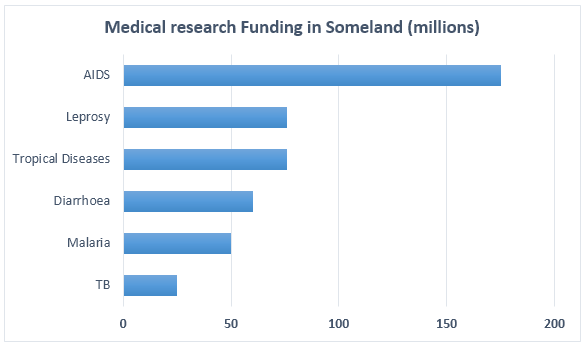 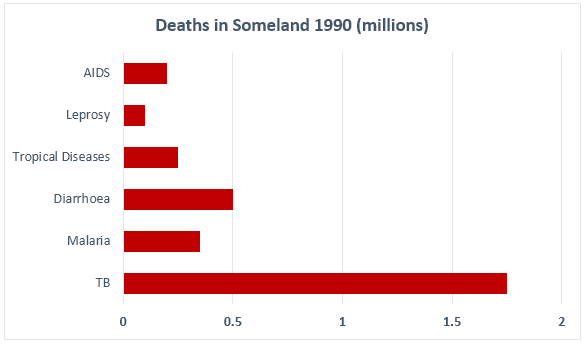 In summary, it is clear that funding allocation for disease research in Someland is not wholly determined by the number of deaths for which each disease is responsible in a given year.

(This model answer can be followed as an example of a very good answer. However, please note that this is just one example out of many possible approaches.)

Model Answer 2:
The diagrams present data on the medical research funding for six deadly diseases in Someland as well as the deaths caused by those diseases in 1990. A glance at the charts reveals that there was a correlation between the amount spent on researching a disease and the casualties it caused- the higher funding generally produced a better result, at least for AIDS and TB.

According to the illustration, the highest medical research budget was allowed for AIDS, around 175 million and in 1990 the death count in Someland from AIDS was 0.25 million, more than death from Leprosy but fewer than fatalities caused by any other diseases. Again, the lowest research budget was for TB (roughly 25 million) and around 1.75 million people died from this illness, the highest casualties from any disease in Someland in 1990. Medical research reserves for Leprosy and Tropical Diseases were exactly the same, approximately 70 million but deaths from the later disease were noticeably higher.  A similar trend could be observed in the cases of Diarrhoea and Malaria, which received around 60 and 50 million respectively for medical research and were responsible for 0.5 and 0.35 million deaths in Someland.

Model Answer 3:
The bar chart presents information on Medical research funding in Someland while the second graph shows the number of death in this area from six diseases in 1990. Overall, the highest amount of funding was allocated to research AIDS while the highest death could be observed from TB, a disease.

As is presented in the first graph, more than 400 million was funded in Someland’s Medical research and out of this approximately 175 million went on AIDS funding. Leprosy and Tropical Diseases funding amounted about 75 million each and the lowest funding was allowed for TB. Malaria and Diarrhea finding received 50 and 60 million consecutively.

RSS
Nguyen Thuong Vu 2 years
The provided illustrations compare funding and fatalities from six different diseases in Someland, in the year 1990. Generally speaking, the lowest number of deaths was caused by leprosy, while the opposite was true regarding tuberculosis (TB), which received the least research funding.

Only 25 million dollars was spent on looking into TB, compared with at least 50 million for each of the remaining diseases, and the disease killed 1.75 million people in 1990. Meanwhile, funding for AIDS research was the highest at 175 million dollars, and just fewer than 250 thousand people died because of this disease.

Researches on leprosy and tropical diseases were each allocated 75 million, but fatalities by the latter disease were treble. Regarding malaria, deaths were around 350 thousand while research efforts were given exactly 50 million dollars. And finally, diarrhoea caused the second-highest number of deaths, 500 thousand, as medical funding for this disease was third-lowest.

Ansumane Lima 4 years 4 months
The given graph presents data on the amount of money spent on medical research and its impacts on Someland's citizens' health in 1990, both measured in millions.

As an overall trend, there was a correlation between the two variables - the amount spent on research and death, in the analysis.

According to the illustrated outcome from the first graph, AIDS research received more funds - around 175 million, whereas TB got 25 million dollar research money. Leprosy and Tropical disease were given the same amount (approximately 75 million each), while Malaria and Diarrhoea were credited roughly 50 and 60 million dollars respectively.

From the second graph, it is noticeable that the more research money that was spent on a particular disease, the more positive impact it had on reducing deaths from this disease. As so, leprosy is the disease that caused the lowest death rate (about 0.1 million population). The principal cause of death in Someland is TB responsible for 1.7 million or so, AIDS and Tropical diseases presented approximately the same number of death as Diarrhoea and Malaria reflected (nearly 0.3 and 0.5 million).

Katarina 5 years 7 months
What will be the score of the first sample? I guess 5?

Nima 7 years 4 months
The presented charts depict the medical research funding amount on millions of dollars and number of death in the same region from 6 diseases namely AIDS, leprosy, tropical diseases, diarrhoea, malaria and TB in 1990.As is provided as a census of perusal in the provided illustrations, researcher’s expenditure 170 million dollars as an aid more than other ailments whereas leprosy and tropical diseases had half of this budget but interestingly people who died from AIDS were two times more than leprosy with 0.15 million. On the other hand. the budget of diarrhoea was more than malaria but the number of death in diarrhoea was more than malaria. In the last disease, unfortunately, the number of death person from TB was very high, 1.7 million people, and had the lowest expenditure than other diseases. In conclusion, TB caused to death the most of the people and had the lowest budget than other, leprosy had lowest death causes for people and AIDS had the most budget than other diseases.