Graph Writing # 32 - Higher Colleges of Technology graduates in the UAE

The chart below shows the Higher Colleges of Technology graduates in the UAE. 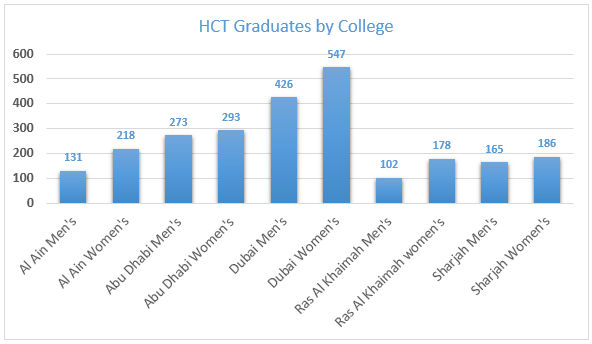 Model Answer 1:
The bar chart compares the number of students who were awarded honours from different colleges under the Higher Colleges of Technology. The graduates are categorized by the colleges they received their graduation from and based on their gender. Overall, more women finished their graduation courses than that of males.

As is suggested in the illustration, roughly 2500 pupils achieved graduation degree from the HTC colleges and among them over 1400 were females. Dubai college awarded degrees to the highest number of students and among them around 550 were females and 430 were males. The second most number of graduates were from Abu Dhabi college and 273 male students were awarded degrees compare to 293 female students. It is quite striking to observe that female graduates outnumbered male students in all colleges in terms of achieving the degree bestowed by the educational institutes. The number of students who earned their graduations from Al Ain, Sharjah and Ras Al Khaimah colleges was somewhat similar, ranging from 250 to 350 and more than 60% of those graduates were females.

The most outstanding feature of the graph is female graduates outnumber male graduates in all the colleges. For example, in Dubai, there are 30% more women grads than men grads. There are also large differences in Al Ain and in Ras Al Khaimah in terms of graduates females and males. However, the number of men and women alumni is almost equal in the colleges in Abu Dhabi. Besides, Ras Al Khaimah college has less than 300 students altogether, while Abu Dhabi has about 600 and Dubai has almost 1000 students who earned their graduation.

In summary, women graduates have outnumbered men graduates in all the colleges, and there are significant differences in the size of the colleges in terms of their students' number who are awarded honours.

Model Answer 3:
The provided bar graph compares the number of male and female students who were awarded honours in different colleges under the Higher Colleges of Technology in the UAE. As is observed from the graph, the number of female graduates is higher than that of male grads in the USA.

IELTS Graph Question: The chart below shows the Higher Colleges of Technology graduates in the UAE. Write a report for a university lecturer describing the information.

Details of the graph:

» What is it?: The data is presented in a bar graph/bar chart (also known as column graph).

» What it represents?: The bar chart compares the number of students who graduated from different colleges in the UAE. It does not give any year. However, it is obvious that around 2500 pupils have graduated and more than 60% of those graduates are females. It is also noticeable that the highest number of students were awarded the degree from the Dubai college.

RSS
Archu 5 years 1 month
Which is the correct tense to be used in this diagram? I think we can't use past tense in this one.

Anthony 8 years
This site definitely has all the information and facts I needed concerning IELTS.