Graph Writing # 33 - Heart Attacks by Ages and Genders in USA

The chart below shows information about Heart Attacks by Ages and Genders in the USA. 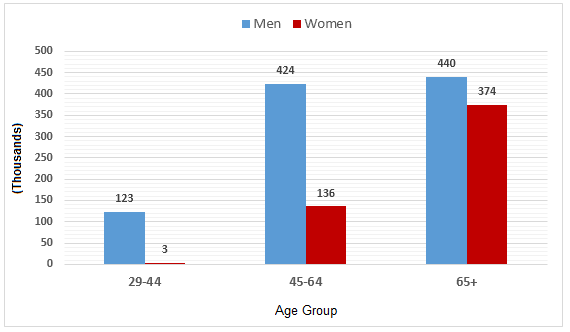 Model Answer 1:
The bar chart gives information on the number of Americans who experience a heart attack in a year based on their gender and age groups. Overall, males have a significantly higher rate of myocardial infarction, a medical term used for heart attack, than that of females and older Americans are more prone to have heart attacks than young ones.

As is presented in the diagram, more than 120 thousand American males between 29 and 44 years get a heart attack while it is scarcely the case among the women of the same age group. The heart attach rate considerably goes higher with the increase of the age and for the Americans over 65 years, this rate is the highest. While over 420 thousand males suffer from this in a year who are middle-aged, it is noticeably lower for women from the same age group. However, Americans over 65 years old suffer from a heart attack the most regardless of their gender and 440 thousand males have had it in a year against the 374 thousand women.

Model Answer 2:
The presented chart compares the number of people having heart attacks per year in the USA with respect to their age groups and genders. As is observed from the chart, the tendency of males to have a heart attack is higher than that of females in all age groups.

The oldest age group constitutes the highest rates of heart attacks. Heart attacks among males are averaged as 440 thousand whereas female hear attacks are 374 thousand per year. Unlike the other age groups, the gap between male and female are largely covered in this age group.

In conclusion, as people get older the risk of having heart attack increases, however in young ages men are more prone to a have a heart attack than of women.

Sample Answer 3:
The chart compares the number of people (in thousands) having heart attacks per year in the USA based on their age and gender.  As a general trend, it is observed that more men suffer from heart attacks compared to women in all age groups.

In summary, men are at a greater risk of having heart attacks in all age groups and the risk increases for both men and women after the age of 65.

Sample Answer 4:
The given chart shows data on the number of the US people who suffer from heart attack dividing them into three age groups. As is observed from the given information, men have more heart attack rates than female and both men and women over 65 years old are prone to heart attack than younger age groups.

In conclusion, more American men suffer from heart attacks than women and this rate is higher among the people over 65 years old.

RSS
Sultan 5 months 6 days
The bar graph illustrates the number of people in the USA who suffer from heart attacks. Overall, significantly more men, who are under 65 years old, suffer from heart attacks than their female counterparts in the United States of America. The age groups are mentioned in the X-axis, and cases per thousand are given in the Y-axis of the graph.

According to the graph, more men than women have had a cardiovascular failure in the USA during the period of the survey. The data clearly shows that the number of cases increases according to the age groups - the higher the age the more the cases. Men's cases are reported at 123 thousand for the age group of 29-44 which reaches exponentially at 424 for the age group of 45-65 and finally, 440 thousand at the age bracket of 65 and older. By comparison, the women have the least cases as 3,000 in the age group of 29-44, 136 thousand when they are between 45 and 64 years old and finally, at 374 thousand in 65 or older age group. It can also be seen the cases of heart attack among 65 or older are the highest- both for males and females. It is evident that the cases of heart attack among men are much higher than that of females.

Nguyen Thuong Vu 1 year 5 months
The given bar chart illustrates the annual number of heart attacks in the USA. Information is categorized based on genders and age groups. A quick look at the graph suggests that elderly people are the most vulnerable and men are more likely to have it than women.

The yearly number of heart attacks of elderly females go as high as 374 thousand, but the figure regarding men in the same age group is even higher, at 440 thousand.

Paul 5 years
Where do you see time, by the way?

Kimloing 5 years 11 months
The given bar chart presents the number of American men and women between 29 to over 65 years old who suffer from heart attacks. In general, men are more likely to have heart attacks than women in the USA and the risk of heart attacks increases with the age of people. Based on the chart, people from 29 to 44 have the least risk of coronary occlusion. Only 3 thousand women from this age group have heart attacks in a year while this number is 123 thousand for men, which is 41 times higher. Between the age 45 and 64, the numbers of men who get coronary occlusion increases to 424 thousand, and the number of females is just over 135 thousand. For people who are more than 65 years old are likely to be affected by heart attacks more than other age groups. While the heart attack victim males rise to 440 thousand, 374 thousand female have this in a year. The number of females who have myocardial infarction when they get older is dramatically higher than the number of women during their age between 45 to 64.

Mercedes 6 years 3 months
Where do you see past tense?

Kavery 6 years 3 months
Time is not mentioned anywhere in the question. Why are you using the past tense?

Dhruvi Sureshbhai Suthar 2 years 10 months
Yeah, this bar graph is in the present tense and we will not write in the past tense.