The graph below shows the number of Computer and Internet users in different Arab countries.

Write a report describing the information in the graph below.

Computer and the Internet in the Arab World 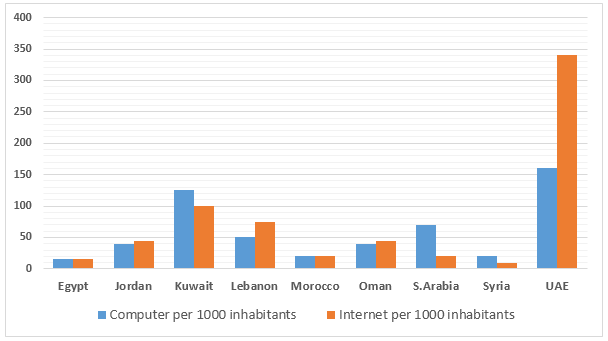 Model Answer 1:
The bar graph outlines the proportion of Arab citizens who are connected to the Internet and use computers. Generally speaking, the UAE and Kuwait have by far the highest ratio of netizens, citizens who have access to the computer and Internet technology, while it was the lowest in Egypt and Syria.

As the diagram suggests, around one-third of the UAE citizens have access to the Internet, a ratio which is quite higher than their computer possessions. Kuwait in terms of its internet and computer users stood at the second position but has a significantly lower number of netizens when compared to that of the UAE. Besides, roughly 10% Kuwaitis own computers and use the Internet. Lebanese Internet users were somewhat higher than their ratio of computer owners and only 50 out of thousand Lebanese owned computers and their Internet users’ ratio was slightly higher. Interestingly computer ownership in Saudi Arabia was roughly 0.7% and the Internet users were even lower. Finally, computer and the Internet users in the remaining Arab countries like Morocco, Jordan, Oman and Syria were fewer than 0.5% and this depicts a dismaying figure in terms of computer and Internet technology penetration in these countries.

Sample Answer 2:
The bar graph shows surprising differences in the level of computer and Internet discernment in the Arab world. Overall, the UAE and Kuwait are by far the most computerised countries, and a dismaying scenario in Egypt, Morocco and Syria is noticeable in terms of the Internet technology's penetration in the latter countries.

The chart present that The UAE has over 15% computer users, compared to Kuwait's 13% and Lebanon's 6%. In contrast, countries such as Egypt, Morocco and Syria have less than 20 computers per 1000 of their citizens. There is also a large disparity in Internet use and availability among those countries. The UAE has by far the highest proportion of netizens, Internet users, with more than one-third of its population connected to the Internet. Kuwait and Lebanon are second and third again, with roughly 10% and 8% users respectively. In some countries the ratio of Internet users is negligible. Besides, Saudi Arabia has less than 2% citizens with the internet access and there are fewer than 5 users per thousand in Syria.

One noticeable feature is that the connectivity to the Internet does not seem to be directly related to the number of computers citizens own. In countries like the UAE, Lebanon, Jordan and Oman, there are more Internet users than computer users. However, in Kuwait, Saudi Arabia and Syria, the scenario is opposite.

RSS
Nguyen Thuong Vu 1 year 6 months
The provided bar graph shows computer ownership and internet usage in 9 different Arab countries. Generally speaking, the more percentages of UAE residents have access to the computer and internet technologies than those of the remaining countries.

In detail, over one-third of UAE people can use the Internet. In Kuwait, one in every 8 citizens have computers, but only one-tenth have Internet access. Like Kuwait, computer users in Saudi Arabia also outnumbered netizens, but with a larger margin, as only there are 125 computers compared with 25 Internet users per thousand residents.

The opposite scenario can be seen in Lebanon, since netizens in this country, 75 out of 1000, are 1.5 times the number of computer owners. The remaining countries show alarming trends, as the ratios of those having access to computer and internet technology stand below 0.5%. Interestingly, there are as many Internet users as computer users in two countries - Egypt and Morocco, 15 per thousand for each category. And finally, the lowest statistics belong to Syria, as only 1 in every 50 citizens has computers, and the percentage of netizens is even lower.

Sagar 6 years 4 months
This is a really helpful website. I really adore this.