The diagram below gives the information about the Hawaiian island chain in the centre of the Pacific Ocean. 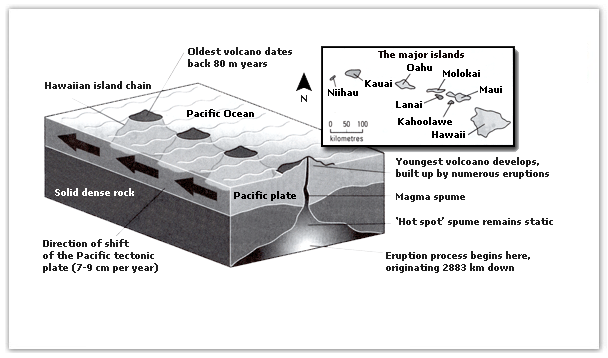 Sample Answer 1:
The given illustration presents information on the Hawaiian Island Chain centre of the Pacific Ocean. As is observed from the diagram, the Hawaiian island chain directly affects the Pacific tectonic plate and because of it, this plate shifts around 7-9 centimetre per year.

As is observed from the graph, below the Pacific Ocean, the Hawaiian island chain stands as several volcanos which are almost 80 million years old. These volcanos stand over the Pacific plate and the eruptions of these volcanos’ created a new volcano just over the Magna spume. The Pacific plate is situated on solid dense rock and because of the new volcano development; the hot spot spume remained static. The eruption process of the volcano’s starts from as deep as 2800 km and that has spat the solid rock layer.

Major islands within 100 km of this area are Maui, Molokai, Oahu and Kauai and because of the eruption and sliding of the plates, the centre of the Pacific Ocean is ever changing.

Model Answer 2:
The map portrays the Hawaiian island chain, which is located in the heart of the Pacific Ocean and roughly 2,700 kilometres in length. As is presented, it is formed of volcanoes and the active ones are at the south-east tip of the archipelago, where Hawaii itself is situated. It also shows the how the volcano eruption occurs.

It is pointed out that the chain began to form almost 80 million years ago on solid dense rock bed and each island started to evolve after an eruption on the seafloor. First, a `hot spot' existed on the ocean bed, which let out a plume of the material called 'magma'. Further, hot spot remained stable. Hence, magma spume was formed. This magma may originate as deep as 2,883 km below the ocean bed. Next, further eruptions took place, which built up the volcano. Eventually, it emerged above the surface of the ocean.

Afterward, the spume of magma has remained immobile as the Pacific tectonic plate moves in a north-west direction across it at an annual speed of 7-9 centimetre. As it moves, a volcano forms as it passes over the hotspot and then become inactive when it has passed it. The other major islands in the Pacific ocean are Niihau, Kauai, Oahu, Molokai, Maui, Lanai and Kahoolawe which are 0-100 kilometres away from each other.

RSS
Ela 9 months
Thanks for all your effort. This is my essay, if you can evaluate it, I would be very happy.

The diagram demonstrates the Hawaiian Island Chain which is in the middle of the Pacific Ocean.

Turning to this chart, it can be seen clearly the Major Islands compound of nine Islands. One of these is Hawaiian Island and the others are Niihau, Kawai, and so on.

The Hawaiian ıslands chain are a volcanic island assembly of which the lowest layer is associated with magma and volcanic eruptions. The eruption process starts there originating at 2883 km. Then magma spume and hot spume come from there. Just over this layer takes place solid dense rocks. Over this layer, the pacific plate is located which made up a lot of the youngest eruptions that lead to a volcano. In fact, the Pacific Plate is a tectonic layer and each year scroll this sheet to the west as 7-9 cm. The sheet which is at the top is the surface of the Pacific Ocean. On this sheet had emerged the oldest volcano 80 million years ago.

To put it briefly, this region is where The Major Islands and Hawaiian Islands chain are located in the centre of the Pacific Ocean which consists of tectonic layers, magma, and eruptions.

Madina 1 year 2 months
If I get such a picture as WT1, I will not be able to describe it in 20 minutes simply because I don't understand what is going on and how it all is connected. I don't like sample model 1 because to my mind, this picture is more about an island formation process, not just the volcano. And in particular, I don't understand how the existing island chain can affect the tectonic plate? As long as I know it is the tectonic plate that can affect islands and continents but not visa versa. So, to me, the first model can be confusing. But I am not a scientist, maybe both options are well descriptive.

Ela 9 months
At first, I had a trouble too to focus on diagrams, but I think that such a challenging exercises make one's writing ability better.

Amir 3 years 9 months
Really hard. If they give exactly the same one in the original test, I wouldn't be able to answer!

April 3 years 10 months
The pictorial illustrates data on the Hawaiian Island Chain located in the middle of the Pacific Ocean.

Overall, it is noticeable that the Hawaiian Island Chain is formed because of the movement of the Pacific plate.

We can see on the diagram that the Hawaiian Island Chain is comprised of several volcanoes which are almost 80 years old. These volcanoes are situated beneath the Pacific Ocean and above the oceanic tectonic plate. The Pacific plate lies over solid dense rock, wherein the eruption begins. The eruption is started in 2888 kilometers of solid dense rock. Then, in the center, the hot spot spume remained static. While itself is fixed, the Pacific tectonic plate is shifted at around 7-9 centimeters per year and the magma spume rises upward until it erupts on the seafloor.

Eventually, the youngest volcano is built up because of various eruptions that occurred and as the Pacific plate moved over the hot spot, the string connecting the islands is formed and made the Hawaiian Island Chain. The eight major islands that are situated on the northwest of Pacific Island are Niihau, Kauai, Oahu, Molokai, Lanai, Kahoolawe, Maui, and Hawaii which have a distance of 0-100 kilometers apart from each other.

Labib Mansour 4 years 1 month
:sad: Too hard to do, to study, even to copy!

Janet 4 years 3 months
The given diagram illustrates the process of volcano development and provides information about the geography of the Hawaiian island chain. Overall, it can be observed that the Hawaiian island chain is prone to have frequent volcano eruptions. In details, the island chain is made up of eight major islands- Niihau, Kauai, Oahu, Lanai, Molokai, Maui, Kahoolawe and Hawaii. Hawaii stands at approximately 100 km wide, which makes it the largest island in the chain. The ocean that surrounds all the islands in the Pacific Ocean is supported by solid dense rocks at the bottom. Above this rock lies the Pacific tectonic plate, which shifts towards the north-western direction at a rate of 7 to 9 centimetres every year.The eruption process begins around 2883 km beneath the ocean's solid rock, at which the 'hot spot' spume remains static. This is then followed by the magma spume, which occurs at the same level as the tectonic plate. After this process, a young volcano develops, resulting from the many eruptions that occur over time. It is also interesting to note that the oldest volcano in the chain dates back to 80 million years.

Natasha 8 months 5 days
This is the perfect answer to the above diagram. It shows how this is to be written if you are not well versed with the science chapter on volcanoes and Islands. Thank you for making this question easy, because in IELTS they judge one's English not scientific knowledge.

Afras 2 years 6 months
Thanks for a completely different perspective, loved it! 3

Harvey 4 years 11 months
The diagram illustrates the geographical location of Hawaiian island chain which is located in the centre of the Pacific Ocean. Overall, Hawaii is the largest island among the eight islands in the area and shift of the Pacific plate contributes to the creation of new volcanoes. According to the illustration, there are eight major islands in the Hawaiian island and among them, the Hawaii is the largest and Niihau seems like the smallest. Moreover, the Hawaiian island chain is located at the top of Pacific plate while shift around 8 cm on an average in a year and contributes to the eruption. The solid dense rocks hold the Pacific plate and at the bottom of the dense rock area, some eruption process begins which is as down as approximately 3 km. The created ‘hot spot’ due to the eruption remains static and a thin flow of Magma Spume goes up to the Pacific plate. From there the youngest volcano develops and this creation is basically the result of several eruptions. The oldest volcanoes in this region are almost 80 million years old.

Rizwan Ullah 2 years 8 months
Why is the Hawaii island is present in the centre of the Pacific plate? Why not present on the boundary?

Anu 5 years 4 months
The given diagram shows the geographical features of the Hawaiian island chain amid the Pacific ocean, which is supported by a solid dense rock deep inside the Pacific sea. It also illustrates the natural factors and forces, which are involved in its formation.

Overall, Hawaiian island is the result of volcano eruptions and underground plate movements. It seems a complicated and continuous process.

Hawaiian island consists of many small islands - like: Hawaii, Maui, Lanai, Oahu, Kauai, Molokai etc. This mountain chain is located on the Pacific tectonic plates in the Pacific Ocean. These plates are observed to be shifting towards the east, 7-9 centimetres per year. Furthermore, this chain of mountains is basically a product of volcano eruptions. Among them, the oldest volcano dates back to 80 million years. In comparison, eruptions of these volcanos created a new volcano just over the Magna spume and its process starts 2883 kilometres down the earth surface.

Smolana 5 years 5 months
It seems the answer did not cover everything and could not present a comprehensive description!