Graph Writing # 137 - The map shows changes in an American town

The map below shows the changes in an American town between 1948 and 2010.

Summarise the information by selecting and reporting the main features and making comparisons where relevant. 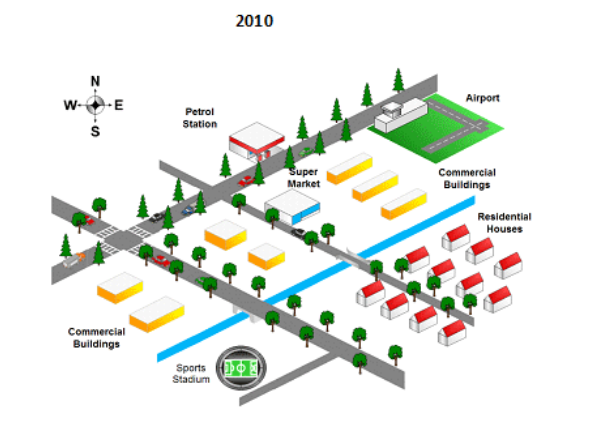 The provided map displays how an American town transformed, by providing how it looked in two different years - 1948 and 2010. A quick look suggests that with the exception of the town's southeast residential area, new structures have been built and changes have been made, but the overall area neither expanded nor contracted.

To begin with, it can be seen that the factories on the north-east corner were demolished to build an airport and several commercial buildings. Similarly, a supermarket replaced a lake which had been next to the factories. It is also worth noticing that four commercial buildings were also constructed on the southwest of the new supermarket. They were located on both sides of a big road, with two on each side. A church in the south direction back in 1948 was replaced by a sports stadium in 2010.

On the other hand, several features of this town did not change throughout the period. The natural elements, a canal and trees to be specific, remain untouched. The road system did not change either, with 2 small and 2 big roads. Additionally, the petrol station in the north was kept intact and so were residential houses on the bottom right corner, unlike those on the other side of the canal.

The maps portray the modifications which took place in an American town between 1948 and 2010. Overall, in spite of some significant changes, the dimension of town did not alter. However, these variations manifest that the town developed gradually in terms of everything during this interval.

Looking at the details, there were some significant variabilities. From the middle of town up to north-east, the surrounding lake with trees and the factories were situated in 1948. In 2010, these places were modified to a supermarket, commercial buildings and the airport. At the same time in the bottom right-hand corner of the town, the sports stadium replaced the church during this time. Residential houses and local supermarket were substituted with commercial buildings.

By contrast, the residential houses which were located on the right side of the canal and the petrol station situated in the north of the town did not change their positions all through a period of time.

The given illustration compares the map of an American town in 2010 with that of 1948. Analyzing the town in both 1948 and 2010, it is obvious that despite some general changes like the relocation of buildings or the establishment of new facilities, its main structure remained almost the same.

As can be seen, residential apartments in the south-east corner of the town were untouched, and it is the same for the streets of the town and the canal. Moreover, the trees of the town were not chopped-down for new constructions. It is worth noticing that the petrol station down the streets, which run south-west to north-east, was not demolished or repositioned.

Looking further at the maps, many changes took place during the period. The supermarket was relocated and the church was demolished to make way for a sports stadium. The residential houses located at the corner of the main streets were knocked down in order to build two commercial structures. Furthermore, in 2010 there is an airport, located in the eastern part, the place where four factories were running in 1948. The presence of commercial buildings in 2010 is noticeable while houses and factories were predominant in 1948’s map.

Overall, it can be seen that the town had gone through several modifications, such as the construction of a new airport, a sports stadium and establishment of some commercial buildings at the expense of some residential areas and factories.

As is shown in the map, in 1948, the town had many residential houses located in the south-east side and central part of the town, whereas the industrial areas (factories) were situated in the north-east side. Moreover, there was a petrol station on the opposite side of the factories. Two other noteworthy infrastructures that the town had during that time were a local supermarket and a church, positioned in the western and southern part of the map respectively. The town also had a canal running from south-west to the east side.

Looking at the town after 62 years, the town had witnessed the addition of some commercial buildings and an airport. While the former had been constructed by demolishing the centrally placed residential areas, the latter was established by knocking down the factories. Furthermore, the church was removed to make way for the development of a sports stadium. Another major change was the relocation of the supermarket from the far west side of the map to the central town.

Author Kuldeep Sharma 2 years 8 months
The maps portray the development works which took place in an American town between 1948 and 2010.

Overall, the dimension of the town did not change but some commercial and necessary amenities were built over the period.

It is evident from the maps that in 1948 and 2010, there was no change in the location of a petrol station and residential houses, which were in the north and east sides respectively. However, in 1948, there were many factories in north east direction, which were replaced by the airport in 2010, over the same direction. Furthermore, in 1948, one dramatic change was of the canal, which passed through the middle of the town, was not available in 2010. Besides, in 2010, sports buildings and commercial buildings occupied the place of local markets and church, which were not present in 1948. It is noteworthy that both in 1948 and 2010, the town was surrounded by many trees with many passages for the people to move easily.

Tarun Kumar 4 years
In the second model answer - 'church was converted into a stadium is better'.

Begim 5 years
In the introduction, the writer says that changes occurred "marginally", but then in paragraph 2, it is written: there were serious variabilities. Also in the end: in spite of some significant changes. It somewhat contradicts.