The line graph shows the historical oil prices per barrel from 1973 to January 2009. 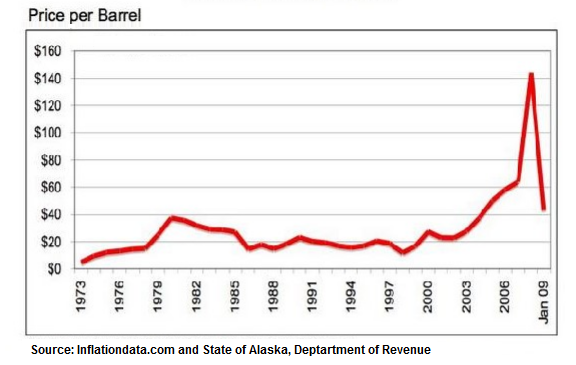 The line graph illustrates the fluctuations in oil price per Barrel from 1973 to January 2009. The data sources are - inflationdata.com and the Revenue Department of Alaska. Overall, oil price per barrel was as low as 5 USD in 1973 and went as high as USD 143 in 2008 and kept on declining afterwards.

The line graph illustrates changes in oil price between the year 1973 and the first month of 2009. Data is collected by inflationdata.com and the Department of Revenue of Alaska.

Overall, oil price per barrel ranged from as low as 5 dollars in the early years to as high as 145 dollars in recent years. Additionally, it did not go beyond 40 dollars before 2006.

Per barrel of oil was sold at 5 dollars in 1973, which was the lowest price compared with the years afterwards. It took 8 years for the price to increase to approximately 40 dollars, before becoming nearly 20 USD in 1986. From there, oil price fluctuated around 20 dollars a barrel until it dropped to 10 dollars in 1998. However, the price increased 3-fold by the end of the 20th century and furtherly surged to nearly 40 dollars per barrel in 2005. The most noticeable changes took place in the remaining years, as the price reached the zenith of over 140 dollars in 2007. But as of January 2009, after continuous decreases, the figure stood at about 42 dollars a barrel.