The chart below gives information on the percentage of British people giving money to charity by age range for the years 1990 and 2010. 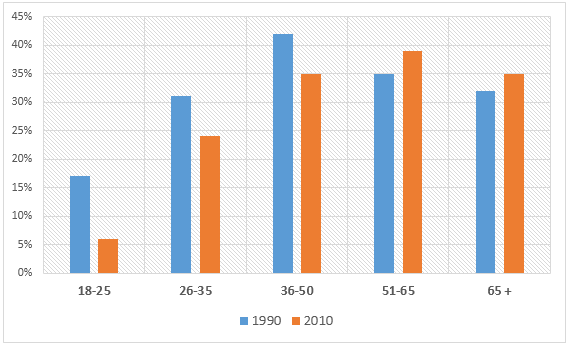 Model Answer 1:
The chart examines the levels of donation contributions by British people of different ages in two different years - 1990 and 2010.

Overall, a greater percentage of British people gave money to charity in 1990 than in 2010 except for the people who were over 50 years old. It is worth noticing that, elder people donated more for charity than their younger counterparts.

Sample Answer 2:
The bar graph illustrates the ratio of British citizens' contributions to charity based on their age in two different years - 1990 and 2010.

Overall, more British gave money to charity in 1990 than they did in 2010. However, people over 50 years old did just the opposite and a fewer younger Britsh donated to charity than the adults did both in these years.

In 1990, 42% British between the age of 36 and 50 donated to charity and this ratio was the highest. In contrast, only around 17% youth from the 18-25 age-group contributed to the philanthropy works which was the lowest. After two decades, both these percentages declined significantly, 35% and 7% respectively.

Sample Answer 3:
The bar graph illustrates how many British citizens devoting money to charity by various age groups in the years 1990 and 2010. Overall, it is clear that majority of people donating money aged 36 to 65 for both years and people aged from 18 to 25 were the least to donate money.

First and foremost, the most striking feature is that there was an increasing trend in the proportion of British people donating money in 1990 and peaked at people aged 36 to 50 (just above 40%) which is then followed by a gradual drop. The proportion of people who aged over 65 giving money to charity accounted for about 33%.

Turning to 2010, it is revealed that there was a significant rise in the percentage of British people who donate money (approximately 6% for those aged 18 to 25 and 24% for that age group of 26 to 35). A similar trend can be observed for the next age group and hit its peak at about 40%for those aged 51 to 65. In contrary, an opposing trend can be seen in the last age group (people aged over 65).

Ibtisam 4 months 19 days
Should we write the conclusion in writting task 1?

Ali Rashed 4 years 9 months
The given bar graph demonstrates the number of people in the UK who gave money to a nonprofit organization by five age groups in 1990 and 2010. Moreover, that information is expressed via percentage. The data is presented in a double bar graph.

Samaneh 5 years 6 months
I do agree with you, dear guy.

IELTS Mentor 5 years 9 months
Thanks a lot for your nice comment. Have a good day.

Mohammad 5 years 9 months
That was the greatest writing for IELTS that I have ever seen :) Good luck ...