The charts below show the percentage of monthly household income spent on various items by two different groups in one European country. 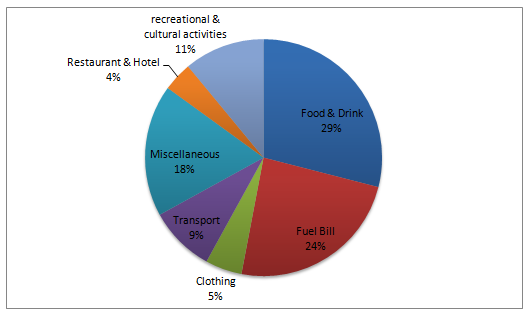 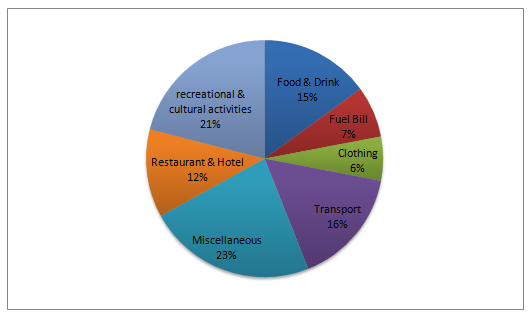 Sample Answer 1:
The pie charts illustrate the proportion of household expenditure by two income groups in Europe. In general, it is clear that house rent is not included in the two pie charts.

Sample Answer 2:
The pie charts compare the proportion of monthly domestic cost allotted for 7 categories, namely: food and drinks, fuel bill, clothing, transport, miscellaneous, restaurant and hotel and lastly, recreational and cultural activities. The first chart illustrates the expenditures of the low-income group and the second pie chart shows how the high-income group spent their income. Both charts pertained to one of the countries in Europe.

It is evident that the low-income group spent the largest proportion of their income on food and drinks while the high-income group allotted the majority of their salary for miscellaneous items. Meanwhile, the tiniest percentage of expenditure for lesser income group was for the restaurant and hotel while for the higher income group, this was for clothing.

In detail, poor people prioritised food and drinks and this item demanded 29% of their wages unlike with rich persons, as it was only on their 4th priority with only 15%. Surprisingly, the low-income group spent more on fuel bill compared to the high-income group with 24% and 7% respectively. However, in the remaining categories, rich people had higher expenditures. For instance, rich individuals spent 21% of their wages on recreational and cultural activities while poor individuals allotted only 11% for this category. Interestingly, the high-income group spent an enormous proportion of the miscellaneous category (23%) while the low-income group allotted only 18%. Also, rich individuals spent more on transportation (16%) than poor people (9%). Similarly, both categories have less than 10% spent on clothing.