The bar chart below shows the percentage of unemployed graduates, aged 20-24, in one European country over a two-year period. 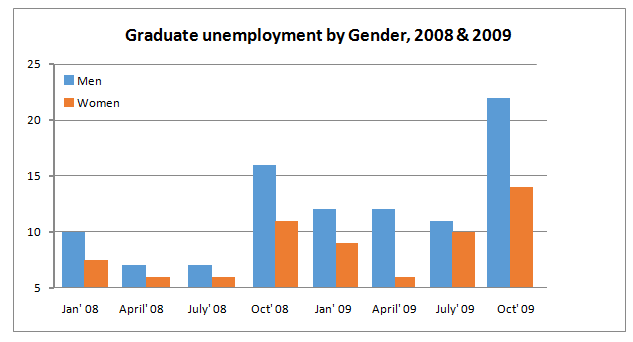 First and foremost, from January to April 2008, a decreasing trend was detected for both men and women. There was 10% of male graduates who were unemployed in January 2008 and dropped slightly to about 7.5% in April and remained constant until July 2008 compared to about 7.5% and just above 5% in January 2008 and April 2008 respectively for women. There were the same percentages of unemployment for both male and female in April and July 2008. A similar trend can be seen in the percentage of unemployed graduates starting from October 2008 to July 2009. The male graduates’ unemployment rate was just over 15% in October 2008 and decline moderately to approximately 12% in January 2009, and reached just over 10% in July 2009.

Interestingly, unemployed female graduate decreases from October 2008 to April 2009 continually before a dramatic increase in July 2009. A sharp rise in the unemployment rate for both genders can be observed after July 2009 and eventually peaked at around 23% for men and just under 15% for female in October 2009.