The graphs below compare the number of cosmetic procedures performed on males and females in Korea in 2004. 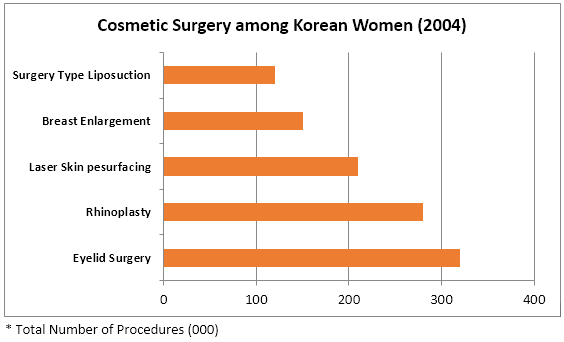 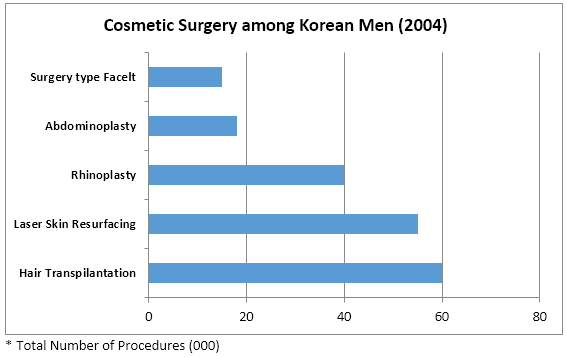 Sample Answer:
A glance at the two figures provided reveals the popularity of various forms of cosmetic surgery among Korean men and women in 2004.

Not surprisingly, plastic surgery enjoyed widespread popularity among women. By far the most common forms of cosmetic procedure for this group, eyelid surgery and Rhinoplasty were performed a staggering 320,000 and 275,000 times respectively. Third in terms of popularity, meanwhile, was laser skin resurfacing. An approximate 215,000 of these procedures were conducted on women during the year in question. Breast enlargement and liposuction were considerably less common, at 145,000 and 120,000 operations respectively.

Equally predictable is the fact that plastic surgery was far less popular among men. In contrast to women, hair transplantation was the most common cosmetic procedure. There were just 60,000 of these operations among Korean males. Numbering some 55,000 procedures, laser skin resurfacing was second for this group. Third was Rhinoplasty, at approximately 40,000 operations. Finally, a relatively small 19,000 Abdominoplasty and 14,000 facelift procedures were carried out on men during 2004.

Also noteworthy is the fact that hair transplantation, Abdominoplasty and facelift patients  were exclusively male, while 100 percent of liposuction, breast enlargement and eyelid surgery patients were female.

RSS
Alm 3 years 4 months
The graphs illustrate and compare the gender distribution of people who attended different kinds of cosmetic procedures in South Korea during the year 2004.

Overall, plastic surgery was more popular to female than male, while eyelid surgery was very common among women in South Korea in 2004. However, most men liked hair transplantation . Finally, the types of surgery were different and men and women have had different operations.

Among women, the largest and lowest cosmetic surgery were eyelid and liposuction, with proximately 320,000 and 120,000 times while hair transplantation and facelift, with around just 60,000 and 16,000 times were done for men. Second largest surgery was rhinoplasty in female and laser skin resurfacing in male.