The chart below shows the number of girls per 100 boys enrolled in different levels of school education. 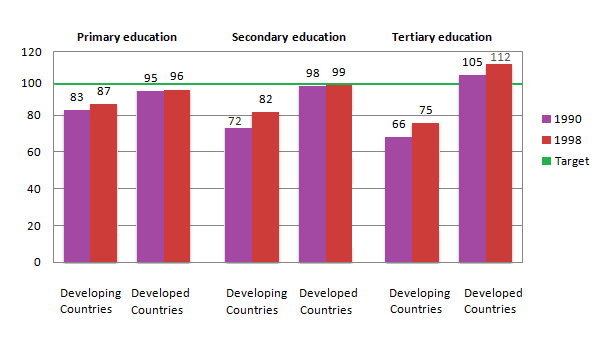 First of all, in elementary school of poor countries, there was a slight increase of female students number from 83 pupils in 1990 to 87 pupils in 2000, while female pupils in affluent one rose slowly to somewhere in the vicinity of 96 pupils in 2000. The target, furthermore, would be 100 pupils in 2005.

In addition, in junior high school, the poor experienced a considerable growth around 10 pupils over this period of time. The affluent one, meanwhile, levelled off almost 100 female pupils. Whereas, the target was always same in three different education levels.

In senior high school, moreover, from a negligible 66 students in 1990, the number of female students in poor countries saw a rapid climb approximately 75 students in 2000. In affluent countries, whereas, it increased significantly more than its target around 105 and 112 students in 1990 and 2000 respectively.