The graph below gives information on the population of turtles in India from 1980 to 2012. 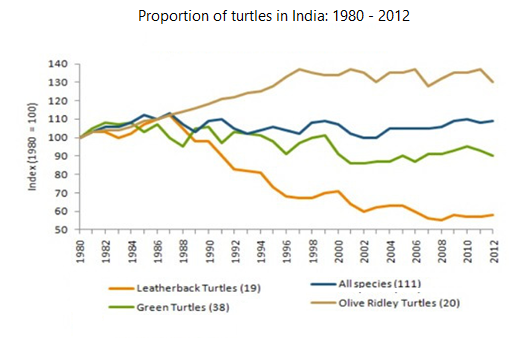 Model Answer 1:
The line graph gives data on different turtle species in India between 1980 and 2012. The given turtle population index clearly states that leatherback turtles greatly reduced during the given period while the Olive Ridley species managed to increase their population in India.

Analysing the illustration reveal that there were 111 turtle species in India and the 1980 turtle population index considered 100 units and in this year, all turtles in India were at unit 100. However, over the time, leatherback turtle’s number dropped significantly and reached to only 60 units while an opposite trend could be observed in the case of Olive Ridley turtles. This species continually expanded, according to the index, till 1997 and then showed some fluctuations with a sharp drop in 2012 when it was just over 120 units. Finally, the green turtle’s index indicates that a rapid oscillation was visible in the population of this turtle. Over the years, this species's population, however, slightly dropped and they were just over 90 units in 2012. The index of all turtle species did not change significantly, though there were many ups and downs in this number. The important information that the diagram provides is the number of various types of turtle species. It was 19 for leatherback turtles, 38 for green turtles and 20 for Olive Ridley.

Sample Answer 2:
The given line graph illustrates the number of population of four various kinds of turtles in India between 1980 and 2012. The unit is measured in Index. It can be clearly seen from the graph that the number of Olive Ridley turtles soared within the given period of time and the figure of Leatherback Turtles gradually plummeted across the given period.

Similarly, all species showed gradual increase till 1987 (110) and following that depicted oscillation and hit figure almost 110. Green Turtles showed a downward trend. The number of Green turtles palpitated throughout the given period and the population figure reached almost 95 in the year 1989.The number of Olive Ridley Turtles presented sharp increase till 1987(110) and thereafter showed sharp decline throughout the given years and reached its number to below 60 in the year 2012, which is the least number of the population showed among turtles.

Generally speaking, Olive Ridley Turtles became the dominating turtle species in terms of their number in India. Nevertheless, the number of Leatherback Turtles kept on decreasing, and they faced the risk of extinction in India.

Ankit Tuteja 5 years
You have just changed the position of olive ridley turtles and leatherback turtles.