The line graph below shows the household recycling rates in three different countries between 2005 and 2015. 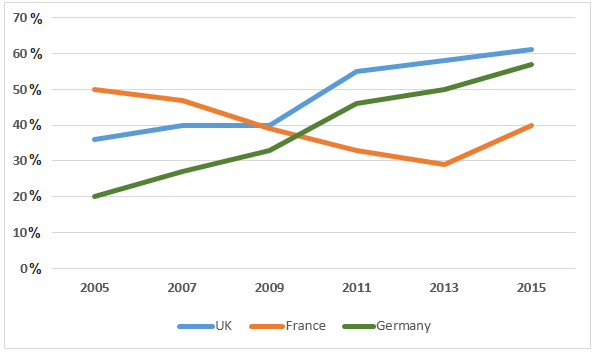 Sample Answer:
The given line graph compares the proportion of domestic waste recycling in the UK, France and Germany from 2005 to 2015. Overall, the recycling rates in the UK and Germany increased over the period while it actually decreased in France.

RSS
Nguyen Thuong Vu 2 years 9 months
The provided line graph illustrates the changes in proportions of household waste recycled in the UK, France and Germany over 10 years commencing from 2005.

Overall, the recycling rates of the UK and Germany increased gradually while the opposite trend was true in France. More specific information will be summarized below.

To begin with, in 2005, precisely half of all domestic waste in France was recycled. The figure of the UK (also in the year 2005) was almost 40 per cent, which was nearly double from recycling in Germany.

After four years, France's recycling rate decreased to four out of ten households, intersecting the UK. Then in 2011, the proportion of recycling in France furtherly dipped below 35%. Conversely, figures for Germany and the UK grew to approximately 45% and 55%, respectively, to surpass that of France.

Germany and the UK continued to have stable increases in their proportions of household recycling rates. Their figures hit the highest point by the end of 2015. Around 60 per cent of waste was recycled in both countries in the year 2015. Regarding France, the rate was down to 30% in 2013 before increasing by one-third 2 years later.

Jilesh 7 years 4 months
Here, in this task 1, where the question is shown?