Graph Writing # 170 - Why students are learning a foreign language

» You are advised to spend about a maximum of 20 minutes on this task. Write about the following topic:

% of teachers reporting the following as the most common reasons for learning: 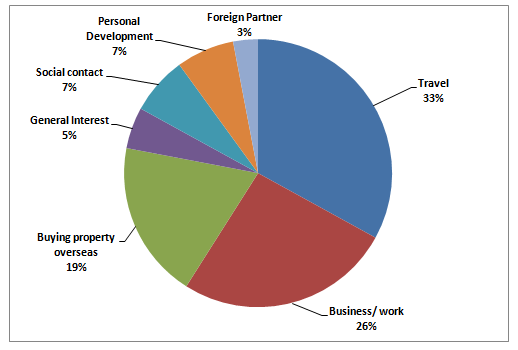 % of teachers reporting a recent increase in people learning for the following reasons: 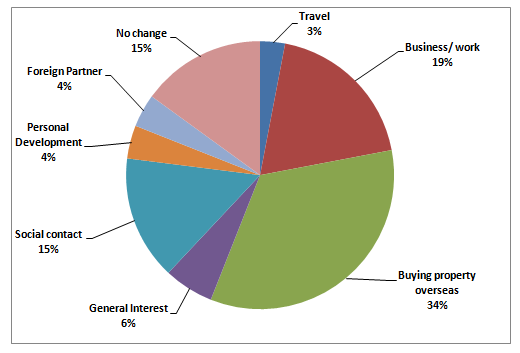 Model Answer 1:
The first pie chart shows different reasons why students learn a second language while the second chart illustrates how they account for recent changes. Data is based on a survey by some British teachers of foreign languages.

Overall, travel seems to be the primary reason for learning a second language among British students. At the same time, the majority of teachers think that the recent increase in students' learning of a foreign language habit these days is mainly influenced by the aim of owning overseas properties or professional reason.

To begin with, 1 out of every 3 teachers of foreign languages in Britain believes that students learn a foreign language for travelling. But conversely, regarding the effect it has to recent changes, it represents the lowest proportion, with only 3% of all teachers think so. Besides, the purpose of work or business accounts for learning according to 26% of teachers, and 19% think that they increased recently. On the other hand, just below one-fifth of all teachers believe that students' main reason for learning a new language to buy properties. However, the figure becomes as high as one-third when it comes to its effect.

Similarities can be seen for general interest, personal development and having a foreign partner, as their figures are around 5%. Additionally, 15% of all teachers attribute recent changes to having social contacts. And finally, an equal proportion of teachers believe there have been no changes.

Model Answer 2:
The first pie chart outlines the primary reasons for the pupil to learn a second language while the second pie chart shows the changes in these purposes based on the responses of language teachers in Britain. Generally speaking, travel, job and business are the primary objectives for students to learn a foreign language and property purchasing and maintaining social contacts are two aims which inspired an increasing number of students to learn a second language.

The first pie chart reveals that almost one-third of foreign language learners in Britain enrolled in second language learning classes to be able to travel. Just over one-quarter of them learn it for professional purposes. Interestingly, 19% of them learn it to buy property overseas. Only one out of 20 students showed general interests while 14% of them aim for skill development and to maintain social contacts.  The least percentage, 3% to be exact, were motivated to learn a foreign language because of their foreign partners.

The second pie chart presents the ratio of a recent increase in foreign language learners in Britain and it is obvious that property-owning and career objective were the two primary reasons for this surge. 19% escalation was noted for both of these purposes. Foreign partners, self-development, travel, general interests each contributed to 3 to 6 per cent proliferation while social interaction contributed to a 15% increase of foreign language learners according to the teachers.

Sample Answer 3:
The given pie charts elucidate the opinions of some British foreign language teachers about the primary causes for students to learn a second language. Overall, career, travel and purchasing overseas property are three main reasons which were reported earlier for people to develop a second language skill and recent changes show that more people started learning the language due to other factors like social contact.

According to the first diagram, one-third of the teachers in Britain who teach a foreign language believe that people learn a second language so that they can travel. According to them, career prospect is the second most important reason that drives just over one-fourth of the language learners. Interestingly, 19% of students learned the language to be able to buy property while personal development and social contact each as a reason were reported by 7% of teachers. The least percentage of tutors believe that people learn a language to have a foreign partner.

The second pie chart, however, shows that there had been some changes and property purchase in a foreign country was reported as the main reason for learning a language. Career, according to this diagram, was the second most favoured reason while social contact attracted. Only 3% of teachers at that survey believed that people learn a second language to travel. All other reasons contributed to just above 10% of student's learning a foreign language.

Model Answer 4:
The pie charts illustrate the survey results conducted in Britain to reveal the opinion of foreign languages teachers about their students’ motivation on attending their classes. The first chart shows the common factors that attract pupils to learn languages while the second chart displays the recent changes in those factors perceived by the teachers.

It can be clearly seen that there are seven categories which the teachers consider as the main reasons. They are - having a foreign partner, travel, business/work, buying properties overseas, general interest, social contacts and personal development.

To start with, based on teachers’ perceptions, business overseas trip and travelling were two domineering reasons for pupils to learn other languages. However, most of them agreed that there were different changes for both. More and more teachers thought that business purposes were the major reasons besides the others, but the percentage of those choosing travel as the main purpose fell dramatically from 33% to 3% of the total percentage.