» You are advised to spend about a maximum of 20 minutes on this task. Write about the following topic:

The bar chart below gives information about vehicle ownership in China.

Write a report for a university lecturer describing the information. 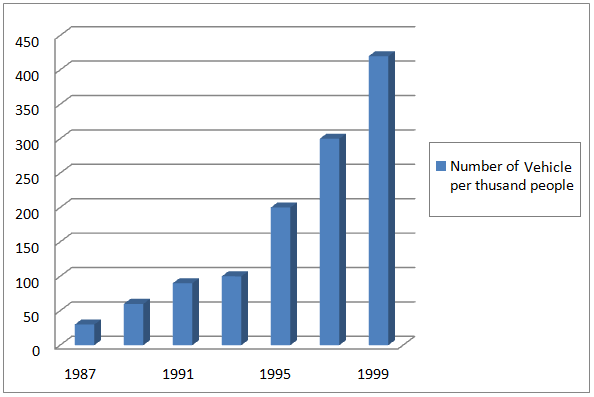 Sample Answer 1:
The provided bar chart reveals data about vehicle ownership by Chinese citizens from 1987 to 1999. The data shows the number of automobiles owned by per thousand people.

In general, the possession of different kinds of motorised transportations increased rapidly during the last nine years of the given period. Vehicle ownership in this period increased steadily and it was far quicker after 1993.

To begin with, in 1987 one thousand Chinese people owned only around 30 vehicles which increased over 50 in just two years. The rate kept on increasing every year and in 1995 this number reached to 200. There was a dramatic increase in terms of ownership of vehicles in China in around 1995 and it reached to over 300 per thousand people in 1997 which means almost every three Chinese citizens owed a car.  The percentage of vehicle ownership soared more than double in just 4 years from 1996 to 1999. In the final year, 1999, more than 400 vehicles were owned by per thousand Chinese people and that was an overwhelming figure compared to their vehicle ownership in 1987.

Model Answer 2:
The bar graph depicts information about motorised vehicle possessions in China during a twelve-year period - from 1987 until 1999.

In general, the number of automobiles owned by Chinese citizens increased gradually and marked a noticeable change in vehicle ownership during the observed times.

Looking at the details, vehicle ownership in China in 1987 pertained a figure about 30 vehicles per thousand individuals. This number swelled modestly between the year of 1987 and before 1995 which was about 10% vehicles ownership. Furthermore, in 1995, the number of car possessions went up dramatically, about 200 vehicles and was double than the previous number. This figure grew significantly through the following years and in 1999, and it accounted for a steep increase, almost 4,10 vehicles per thousand citizens. The figure extremely noticed a significant change in vehicle ownership between 1987 and 1999. In 1999, it was reckoned approximately twelve times higher than the rate of vehicle possessions in China in 1987.

Sample Answer 3:
The diagram illustrates how many cars per thousand Chinese held between the years 1987 and 1999. As a general trend, motorised vehicle ownership in China increased significantly and in just 12 years, it skyrocketed.

According to the column graph, motor car ownership in China in 1987 was quite low as less than 30 cars were owned by per thousand Chinese. In 1989, it crossed 50 cars ownership per thousand Chinese people and this trend continued in the next years. Then, in 1991, every ten people owned a vehicle on an average and this number kept on increasing in the following years. In 1995, 200 cars were owned by a thousand Chinese. After 2 years, this number reached to 300 which indicate that almost every three persons in China owned a car. In the final year, the number of cars owned by a thousand Chinese citizens crossed 400 and that was more than 13 times higher than the initial figure in 1987.

RSS
Nguyen Thuong Vu 2 years 1 month
The provided bar chart shows the number of vehicles owned by every thousand Chinese citizens, between 1987 and 1999.

As an overall trend, the figure increased as time went by and the most significant changes came after the year 1993.

Initially, it stood at 25 vehicles in 1987, meaning that one in every forty people had a vehicle. 2 years later, the ratio doubled, then by 1993, one thousand citizens possessed approximately 90 vehicles.

It is worth noticing that since then, the figure increased dramatically and almost similarly after every two years - it was nearly 200 in 1995 and 300 in 1997; and by the end of the given timeline, it can be seen that the number was just over four hundred. In other words, a thousand Chinese owned 400 vehicles, illustrating a sharp difference of more than 12 times compared with the statistic of 12 years ago.

Gurnoor 5 years 2 months
The provided graph illustrates the number of vehicles owned by per thousand people in China from 1987 to 1999 with the gap of two years between each surveyed year.

Overall, vehicle ownership shows an upward trend, reaching its peak in 1999, showcasing a dramatic shift in ownership over the 12 years.

As it can be observed, in 1989, vehicles ownership almost doubled in comparison to the preceding surveyed year (1987), when the vehicles were just about 250 per 1000 people, and the same movement can be witnessed from 1989 to 1991, while the year 1991 showed a change in comparison to the previous year, amounting to over 750 motor vehicles per thousand individuals. After that, the number of vehicles soared swiftly, and in 1995, it was about 4 times the number of vehicles owned in 1987 and around 6 times than it was in 1997. In the end, in 1999, ownership of vehicles by per thousand Chinese individuals went beyond 4000.