The figure shows the results of a survey of 1000 adolescents in five different countries. The participants were asked at what age they believed certain rights and responsibilities should be granted to young people.

Summarise the information by selecting and reporting the main feature. 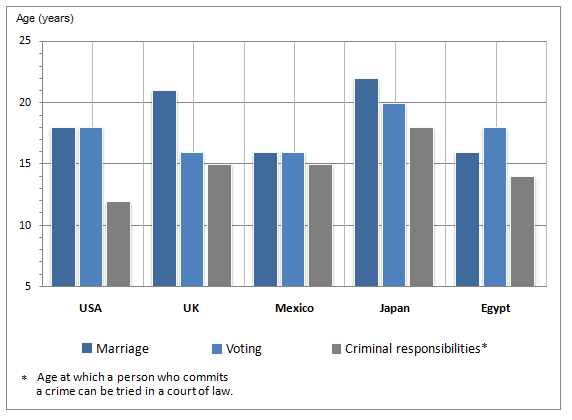 Sample Answer 1:
The provided column graph summarises the result of a study and indicates what people in five different countries think to be the appropriate age to be allowed to have certain rights and responsibilities. Generally speaking, citizens’ opinion regarding the right age for marriage, voting and prosecution for crime greatly varies.

As is given in the illustration, people in Japan and the UK opine that they should not marry until they are at least 20 years old while Americans believe that this age should be exactly 18. On the contrary, Mexicans and Egyptians agreed that they should be allowed to get married just after they cross 15. In terms of the voting power, Japanese state that 20 years is the right age for them while Americans and Egyptians express it should be 18. Both British and Mexicans want their voting right at 16 years, on the contrary.

Finally, American people give their opinion that someone should be charged by the law for committing any crime when they become 12 years old. Japanese seems like have a different opinion as they believe that someone should not be imposed with criminal offence until they turn 18 years. Survey participants in other three countries expressed that before 14 they should not be punished by law for any misdeed.

Sample Answer 2:
The diagram describes a survey result of 1000 teenagers about at what age they should follow particular rights and responsibilities. The survey has been conducted in five different nationalities on three categories such as marriage, voting, and criminal responsibility.

In short, all teenagers from five different countries have a different agreement of what age should the young people be granted on certain rights. Only Japanese believe that they should get those rights at above 18 years old while others within 18 years old.

Sample Answer 3:
The bar graph depicts the survey turnout of 1000 adolescents in 5 countries (USA, UK, Mexico, Japan, and Egypt). The study tackles the beliefs of the respondents as to what age should one be acceptable to have the rights and responsibilities for marriage, voting and criminal responsibility. In an overview, respondents replied that marriage should be applied for those over 20 in UK and Japan. Voting was tabulated to side with the same age proportion in Japan, while criminal responsibility was opined to be taken from the age of 18.

Marriage was seen to be applicable greater in Japan and in the UK who are above the age of 20. Americans view it acceptable starting from the age of 18. Both Mexicans and Egyptians think 16 is the right marrying age.

Furthermore, the power to vote at the age of 20 was seen mandatory in Japan; however, USA and Egypt reserved that right for citizens at the age of 17. The Britons, as well as Mexicans, wanted it to be applied a year younger.

Lastly, criminal culpability age limit should begin at 18 years old in Japan, whereas the UK and the Mexican respondents believe it must be imposed at the age of 15 and a year before in Egypt. It was the USA subjects who saw it necessary to lower the threshold to 12 years old.

RSS
Manju 8 months 13 days
The provided bar graph compares the survey report, which was conducted among a thousand young people, in five distinct countries, on the basis of their opinion about when is the right time for taking three major responsibilitie s such as marriage, voting rights and criminal responsibilitie s.

Overall, concerning all the three domains, the highest age was preferred by Japanese youngsters whereas the least was suggested by Mexican youths.

A cursory glance is adequate to mention that the notion changes remarkably among the adolescents in these five countries about when they should marry, vote and take criminal responsibilitie s. In terms of marriage, teenagers from the UK and Japan opine that they should cross 20 years to do that, while youngsters from the USA and Egypt suggested they should be allowed to get married when they turn 18. Interestingly, the participants in the USA expected to get married at the same age of voting - 18 years. Meanwhile, the teenagers in UK and Mexico believed that the better age for voting is 16 compared to 19 years in Japan. Although Egyptian participants supported early marriage at 16 years, they recommended the voting right should be granted at least from 17 years onwards. Contrary to that, there was a similar opinion among the youths of the given countries except for the USA with regards to the criminal actions. Participants from the UK, Egypt, Mexico and Japan pointed out that criminal prosecution should be initiated at the age of 14 to 15 years, however, youths from the USA insisted on early actions at the age of 12.

Javid 1 year 9 months
The supplied bar graph gives data on the outcome of the questionnaire of a thousand youths in 5 various countries. They were asked which age would be suitable for them to take certain rights and responsibilitie s.

Overall, it is noticeable that Japanese youths considered taking those rights and responsibilitie s at later years than that of other countries. By contrast, the lowest age for criminal responsibilitie s is seen in the US; for marriage and voting the earliest age, according to the survey, is in Mexico.

Looking at the bar graph in more detail, Japanese youths consider allowing the marriage to youth people should be at 22 years old, for voting at about 20, and for criminal responsibilitie s at 18 years old. Furthermore, in the UK, the age in order for adolescents to get married makes up 21 years old, the age for voting and marriage in the UK is the same with Mexico at 16 and nearly 15 years old, respectively.

With regard to the USA, young people believe that the right for marriage and vote should be granted at the same age (18 years old), and if someone who is 12 or older, commits a crime, should be prosecuted. However, the marriage age should be 16 in Egypt (the lowest) according to the survey participants, and these figures for voting and criminal responsibilitie s are 18 and 14 years respectively.

Ruafza 2 years
The bar chart compares the age at which the younger generation ought to be eligible for marriage, voting and take criminal responsibilitie s in five different countries.

Overall, it can be seen that Japanese teenagers considered having these three rights and responsibilitie s at a later stage of life compared to other countries.

As the graph states, both Japanese and British adolescents wanted marriage eligibility at the age of around 22 and 21 respectively. Although the USA's marriage approval age was about 18 years, Mexico and Egypt both chose approximately 16 years. As for voting, Japan's age requirement was 20, whereas, in Egypt and the USA, this was 2 years fewer than Japan's. Moreover, the UK and Mexico's participants stood at around 16 years for giving permission to votes.

Regarding the age of punishment for criminal offences, the Japanese youngsters considered around 18 years while the Americans had chosen the lowest age, at about 12 years. For the rest of the countries, it was between the range of 16 to 18 years.

Nguyen Thuong Vu 2 years 2 months
The bar chart shows the opinions of a thousand youngsters from 5 countries about what minimum age they believe they should be able to marry, vote and take criminal responsibilitie s.

Overall, Japanese people believed that only until 22 years of age should they be granted all three, an older age than any of the other 4 countries (USA, UK, Mexico and Egypt). More specific information will be summarized below.

To begin with, Japanese young interviewees opined that the minimum marriage age should be 22, and adolescence from Britain also believed that the right to marry should be granted to at least 20 years old. On the other hand, teenagers from America expressed their approval for those who turn 18 while 16 seemed to be the right age for Mexicans and Egyptians.

Interestingly, people from 4 countries (except for Egypt) believed that the right to vote should come before or in the same year as marriage age. Egyptian adolescents thought that citizens could only vote as they became 18. British and Mexican wanted the right to come at the age of 16. Finally, 20 was the age that Japanese people chose regarding this right.

Another look at the graph suggests that interviewees from 5 countries agreed that criminal responsibilitie s should be applied even before people turn 20. Adolescents in Japan wanted all criminals to be prosecuted at the age of 19 and above, the oldest age of all 5 countries, while the youngest is 12 (Americans' opinions). Three other countries argued for criminal prosecution between 14 and 15 years of age.