Graph Writing # 176 - Energy use in an average Australian household

The first chart below shows how energy is used in an average Australian household. The second chart shows the percentage of greenhouse gas emissions which result from this energy use.

The percentage of household energy use in Australia:

The percentage of greenhouse gas produced in Australia: 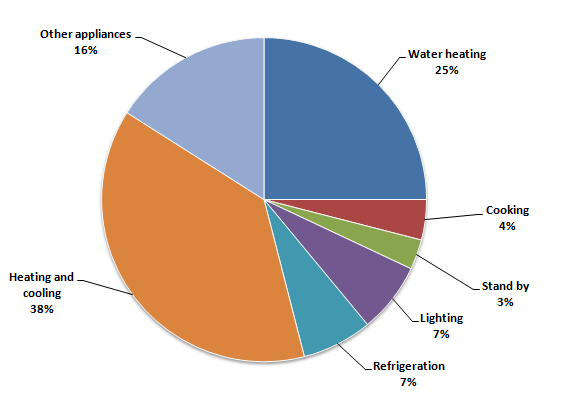 Sample Answer 1:
The first pie chart illustrates average energy usages in a typical Australian family while the second pie chart shows the percentage of greenhouse gas emission from this energy consumption. As is presented, water heating and heating & cooling consume the highest energy and they produce the highest percentage of greenhouse gas in Australia.

According to the given data, water heating system consumed 23% of total energy consumption in an Australian household while heating and cooling system require 20% energy. Refrigeration consumed 12% energy which is larger than that of energy requirement for cooking and lighting. Finally, 5% energy is consumed in standby mode and the remaining 24% energy is required for all other household appliances.

Sample Answer 2:
The first pie chart compares the power consumptions in a typical Australian house whereas the second one presents data on the percentages of greenhouse effects of these power-consuming equipment. As a general trend, the more energy a household appliance use, the more greenhouse gas it emits.

As can be seen,  water heating, keeping the house warm or cool consume almost half of the energy required in an average Australian family. Cooking, standby and lighting all together utilise around 20% power while refrigerators alone need 12% electricity. All other appliances consume the rest one-quarter energy share.

Interesingly, there is a correlation between the percentage of energy a particular device requires to run and the percentage of greenhouse gas this device produces with the exception of heating and cooling device. Heating water, warming and cooling the rooms attribute to more than half of the total greenhouse gas emission. Cooking, stand by and lighting combinedly contribute to 14% gas production which is almost same as the amount produced by other appliances in a house.

In summary, heating and cooling devices emit the highest percentages of greenhouse gas though they consume less power than water heaters. Other devices contribute to emit dangerous gases based on the percentages of energy they require to function.

RSS
Sara 6 months 28 days
Thank you 1 million times for your useful website. Could you please tell me what is each writing Bandscore?

Overall, it is observed that water heating along with other heating and cooling systems require the most energy to function. Additionally, they also contribute to the majority of greenhouse gas production.

As the data suggests, water heating uses 23 percent of the total energy required in the Australian household. Interestingly, the proportion of greenhouse gas emissions of water heating (25%) bears a striking resemblance to its ratio of use. But on the other hand, other heating and cooling activities produce 40% of the gas despite running on only 20% of the energy requirement.

Another look at the graph suggests that refrigeration and lighting both emit 7 percent greenhouse gas and consume approximately 10 percent energy. The figures for standby mode and cooking were also similar, around five percent in both energy consumption and gas emissions. And finally, other appliances use 24% energy and produce 16% gas which causes greenhouse effects.

Umar Maher 4 years 8 months
All paragraphs are good and thanks for that.

Marzie 4 years 9 months
Yes, I agree.... The graph provided is different from the IELTS book.

Victor 4 years 9 months
Am I the only one to notice that? The graphs provided on this page is not the same as those in the IELTS textbook. Anyone to make some amendment?