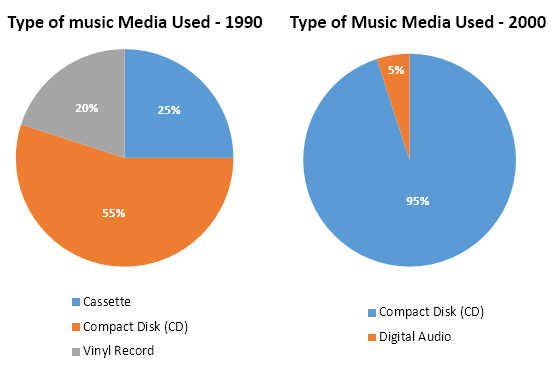 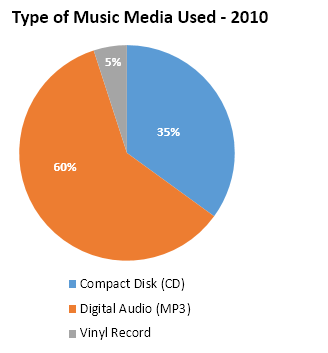 Sample Answer 1:
The given diagrams show how the music had been stored and listened to using different storage units in three different decades with a 10 years interval. As can be seen, CD dominated the music storage in the 90s while MP3 became the primary means of music recording in 2010.

As is observed from the given illustration, Compact Disk (abbreviated as CD) was the most widely used storage type to save and retrieve songs in the 90s. In this year more than half of the music was stored and sold using this media. One-quarter use of Cassette for music enlisted it as the second most popular music media in this year while Vinyl Record was used to record the least percentages of music. After ten years, the scenario changed dramatically and Vinyl Record and cassette were no longer used. The CD consumed the whole market and its use increased remarkably to 95% for music. MP3 was introduced in this year but only 5% of its usage to store music reflects its scarcity at that time. Finally, in 2010, MP3, also known as Digital Audio, consumed the market of CD and 60% use of this media indicates its huge popularity in the 2010s. Interestingly the Vinyl Record was back in this decade with its 5% market share to store music while the CD was still the second popular music storage type though observed a significant decrease of its use compared to 10 years ago.

Finally, MP3 player, also known as Digital Audio, was not used in 1990 for storing music but it contributed to 5% storage in 2000 and it became the primary storage for music in 2010 with 60% storage of music.

Sample Answer 3:
The given pie charts illustrate the comparison of various music media delivery type for the years 1990, 2000 and 2010. According to the given information, Digital Audio (MP3) became the most popular type of music storage and Cassette fade away starting in 2000.

RSS
Nguyen Thuong Vu 1 year 4 months
The given illustrations display how different types of music media were used in three years, 1990, 2000 and 2010.

Overall, Compact Disk, which is abbreviated as CD, was dominant in the 1990 decade while Digital Audio, also known as MP3, became the most popular in 2010.

Usage of CD represents over a half in the first year and it rose to a whopping 95% after a decade. At the same time, MP3 didn't appear in 1990, and they accounted for a relatively small proportion to store music in the year 2000. However, the scenario saw dramatic changes in the next 10 years, as the figure regarding MP3 usage increased 12-fold to become 60%, while that of CD became approximately one-third, down to 35%.

Vinyl record represented 5% in 2010, after having accounted for exactly one-fifth twenty years ago and 0% in the year 2000. Usage of the cassette is shown as 25% in the year 1990 and is not illustrated in the remaining years. It is worth noticing that in 2000, there were only two types of music media while the two other years had three.

Asia 2 years 11 months
Kindly give me feedback regarding my writing task 1. How much I can score with this kind of writing?

Asia Noureen 2 years 11 months
The given pie charts depict the proportion of three different types of recording media listened to by people over three decades.

Overall, the compact disc was the major media to be used in the first 2 decades, and during the last 10 years, digital audio became more popular than other recording media. In contrast, cassettes became least popular and the usage of vinyl records was also minimal during the whole period.

In 1990, the compact disk was the main media to be used and it constituted about 55% of all media usage. However, the usage of cassettes and vinyl records was 25% and 20%, respectively. Over the next decade, the CD was the major media for listening to music, and the proportion of the listeners approached 95% in 2000. With the introduction of digital audio, 5% used to listen to digital audio. However, in 2000, the cassettes and vinyl records were barely used by people.

During the next 10 years, digital audio became much more popular, approaching 60% in 2010, and this media's usage was almost 10 times greater than the previous decade. But CD usage showed a significant decline and it reduced to only 35%. However, vinyl record was reintroduced and the figure was 5%.